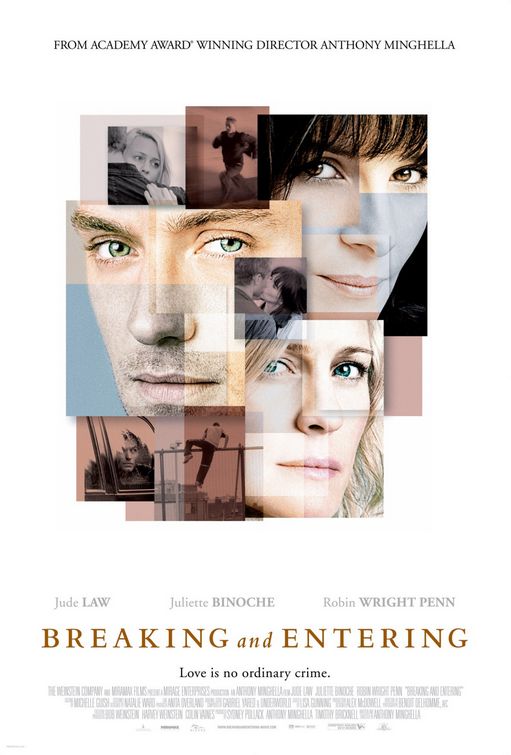 "Breaking and Entering", is a 2006 , was Academy Award-winning director 's first original since his 1991 feature debut, ".

The film stars – whom Minghella directed in "Cold Mountain" and "The Talented Mr. Ripley" – and , from "The English Patient", also directed by Anthony Minghella, and "Chocolat".

In a major supporting role, plays Liv, the long-standing girlfriend of Will (Jude Law's character).

, in his first major film role, portrays Miro. The role, that of a young "traceur", and the burglar to which the film's title partly alludes, requires Gavron to perform several difficult physical feats.

The film, shot and set in King's Cross, a blighted, inner-city neighbourhood of , examines an affair which unfolds between a successful British and Amira, a Bosnian woman – the mother of a troubled teen son – who was widowed by the war in Bosnia and Herzegovina. The filming location for Amira's flat is , , London; other locations are the , and , .

Will Francis (Jude Law), a young Englishman, is a landscape architect living a detached, routine-based life with his Swedish-American girlfriend Liv (Robin Wright Penn) and her behaviourally challenged daughter Bea in London. The 13-year-old girl's irregular sleeping and eating habits as well as her unsocial behaviour (she has trouble relating to people and seems only interested in doing somersaults and practising her gymnastics) reach worrying proportions and start to put a lot of strain on Will and Liv's relationship. Complicating the situation further is his feeling of being shut out of their inner circle since Bea is not his biological daughter. He and Liv start relationship counselling, but their drifting apart continues.

Simultaneously on the business front, Will's and his partner Sandy's state-of-the-art offices in the Kings Cross area are repeatedly burgled by a group of Slavic language speaking thieves. They employ a 15-year-old traceur named Miro (Rafi Gavron) whose acrobatic skills allow them to enter the building. Miro is actually a refugee from Bosnia living with his Muslim mother Amira (Juliette Binoche) who works as a seamstress while his Serbian father was murdered during the war.

Though they're puzzled about the burglars' ability to disable the alarm, the two architects are not particularly worried after the first break-in, mostly writing it off to the neighbourhood's dodgy reputation. However, after the second one they decide to stake out the building after hours hoping to find the culprit and alert the police. Being out of the house on nightly stakeouts actually suits Will just fine, allowing him to get away from the cold atmosphere of his household. He even strikes up a strange acquaintance with an Eastern European prostitute named Ouna (Vera Farmiga) who hangs around the area every night. Spotting Miro attempting to break in one night, Will attempts to follow him. This pursuit leads Will to the flat where Miro lives with his mother Amira. Realizing their modest living means he decides not to report his findings to the police, but goes back to Amira's apartment under the guise of having a suit that needs mending.

He soon becomes emotionally entangled with her, causing him to re-evaluate his life. Conflict arises when the police close in on the burglars, and Will must make a crucial choice which will affect the lives of everyone around him.

and Underworld collaborated on the film's original music score.

*The techniques used to burgle Green Effect come from , a physical discipline and recreational activity of French origin whose practitioners are called "traceurs". Sometimes confused with , a related discipline derived from , the art, as it is called by some practitioners, has gained in popularity in urban areas, particularly in Europe, during the early 21st century.