North Khorasan is one the three provinces that were created after the division of Khorasan in 2004.

Greater Khorasan has witnessed the rise and fall of many dynasties and governments in its territory throughout history. Various tribes of the Arabs, Turks, Kurds,[2] Mongols, Turkemen and Afghans brought changes to the region time and time again.

Ancient geographers of Iran divided Iran ("Iran-Shahr") into eight segments of which the most flourishing and largest was the territory of Greater Khorasan. Esfarayen, among other cities of the province, was one of the focal points for residence of the Aryan tribes after entering Iran.

The Parthian empire was based near Merv in Khorasan for many years. In Parthians times, Esfarayen was one of the important villages of Nishapur.

During the Sassanid dynasty the province was governed by a Spahbod (Lieutenant General) called "Padgoosban" and four margraves, each commander of one of the four parts of the province.

Khorasan was divided into four parts during the Muslim conquest of Persia, each section being named after the four largest cities, Nishapur, Merv, Herat, and Balkh.

In the year 651, the army of Islamic Arabs invaded Khorasan. The territory remained in the hands of the Abbasid clan until 820, followed by the rule of the Iranian Taherid clan in the year 896 and the Samanid dynasty in 900.

Mahmud of Ghazni conquered Khorasan in 994 and in the year 1037 Tuğrul Beg, the first of the Seljuq empire rulers conquered Nishapur.

Mahmud Qaznavi retaliated against the invaders several times, and finally the Qaznavi Turks defeated Sultan Sanjar. But there was more to come, as in 1157 Khorasan was conquered by the Khwarazmids and because of simultaneous attacks by the Mongols, Khorasan was annexed to the territories of the Mongol Ilkhanate.

In the 14th century, a flag of independence was hoisted by the Sarbedaran movement in Sabzevar, and in 1468, Khorasan came into the hands of Tamerlane and the city of Herat was declared as capital.

During the Qajar period, Britain supported the Afghans to protect their East India Company. Herat was thus separated from Persia, and Nasser-al-Din Shah was unable to defeat the British to take back Herat. Finally, the Paris Treaty was concluded in 1903 and Iran was compelled not to challenge the British for Herat and other parts of what is today Afghanistan.

Finally Khorasan was divided into two parts: the eastern part, which was the most densely populated region came under British occupation, and the other western section remained part of Iran.

Khorasan was the largest province of Iran until it was divided into three provinces on September 29, 2004. The provinces approved by the parliament of Iran (on May 18, 2004) and the Council of Guardians (on May 29, 2004) were Razavi Khorasan, North Khorasan, and South Khorasan.

Northern Khorasan province is one of the most diverse territorities in Iran. Kurds speaking Kurmanji makeup approximately 37% of the population, Persian speakers make up 29%, Khorasani Turks makeup 27% and Turkmenas makeup 5%, while the rest of the population is composed of Baluchs, Lurs and Arabs[3] 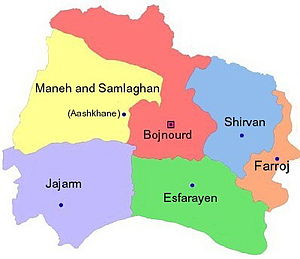 This province contains many historical and natural attractions, such as mineral water springs, small lakes, recreational areas, caves and protected regions, and various hiking areas. Most of the historical relics are from the Qajar era, as earthquakes continue to ravage older relics.

The Cultural Heritage Organization of Iran lists 1,179 sites of historical and cultural significance in all three provinces of Khorasan.

Some of the popular attractions of North Khorasan are: