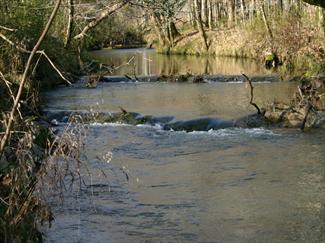 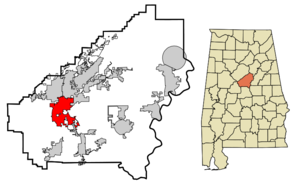 mapsize = 250px
map_caption = Location in Shelby County and the state of

Shelby County, the geographic center of the state of Alabama, was created 7 Feb 1818 by an act of the Alabama Territorial General Assembly, before Alabama became statehood on 14 Dec 1819. The county was named for Isaac Shelby, a hero of the King's Mountain Battle during the Revolutionary War. Many of the first settlers came from South Carolina, Tennessee, and Kentucky; and returned to this region after the victorious Battle of Horseshoe Bend in 1814. As indicated in the 1820 census records, Shelby County contained 2,492 people; 2,044 whites and 448 Africans. Today, it is the fastest growing county in Alabama and among the fastest in the United States. U.S. Highway 31, a two-lane highway at that time, was the main artery from Birmingham to Montgomery, and played an important part in the growth of the community. George L. Scott, Sr., an Alabaster pioneer, owned and operated Alabaster Lime Co. His shipping point, named for him, was known as “Scott Rock”. Later, housing was built to accommodate some of the employees, and the community acquired its name Alabaster from the "white calcium carbonate mineral". The First Bank of Alabaster opened in 1952, and its president was George L. Scott, Jr., who later became the first mayor of Alabaster. The first attempt in 1952 to incorporate Alabaster failed. In January 1953, the petition was again filed, and on 23 Feb 1953, Alabaster was officially incorporated with a favorable vote of 79 to 23, and 427 residing inhabitants. Other Alabaster pioneers were Kenton B. Nickerson and William J. Maxwell. In 1955, the Alabaster Water and Gas Board was formed.

There were 8,164 households out of which 41.9% had children under the age of 18 living with them, 68.0% were married couples living together, 8.9% had a female householder with no husband present, and 20.6% were non-families. 17.1% of all households were made up of individuals and 3.6% had someone living alone who was 65 years of age or older. The average household size was 2.73 and the average family size was 3.09.

On April 1st, 2006, [http://www.veteransskatepark.com/ Veterans Skate Park] was opened to skateboarders from across the nation. , a joint effort between RideSkateboards and the City of Alabaster, is a newly-constructed concrete skate park specifically designed with the skateboarder enthusiast in mind. As one of few such facilities in the south, the park has drawn considerable praise from skateboarders throughout the nation.

Federal Lawsuits Against Alabaster in violation of the Constitution

In 2004 Attorney Donna Beaulieu filed a federal suit against Alabaster for violating her 1st Amendment right to Freedom of Speech. Mrs. Beaulieu ran for circuit judge in 2004. The City would not allow Mrs. Beaulieu to place a campaign sign on her own office building and threatened her with arrest if she did not remove the one she had placed. The City was found to have violated her 1st Amendment rights by the Federal District Court. The City appealed the Federal District Court ruling to the 11th Circuit Court of Appeals, where they once again lost. Alabaster then appealed to the Supreme Court of the United States, where they were denied Cert. Beaulieu's case is now binding case law in the 11th Circuit.http://www.ca11.uscourts.gov/opinions/ops/200416230.pdf

In 2003 attorney Jim Pino filed suit against the City of Alabaster on behalf of his clients. The lawsuit was initiated to stop Alabaster "from taking action against the plaintiffs' property including taking the property by eminent domain, citing first and foremost, the U.S. Constitution's 5th Amendment right to property."http://www.shelbycountyreporter.com/articles/2003/09/10/news/news04.txt

Celebrities from this city

An ESPN "Outside The Lines" documentary on the use of Androstenedione in sports at all levels was partially filmed in Alabaster. The piece filmed in the city focused on two football players from Thompson High School and their use of the performance enhancing drug.

Also of note is the film "Rustin" released in 2001 directed by Rick Johnson starring Meat Loaf and Zachery Ty Bryan (of the T.V show 'Home Improvement') was partially filmed in Alabaster. All of the football scenes were filmed at Thompson High School with several locals cast as extras. Local radio personalities Rick Burgess and Bill Bussey from the also made it into the film as extras.