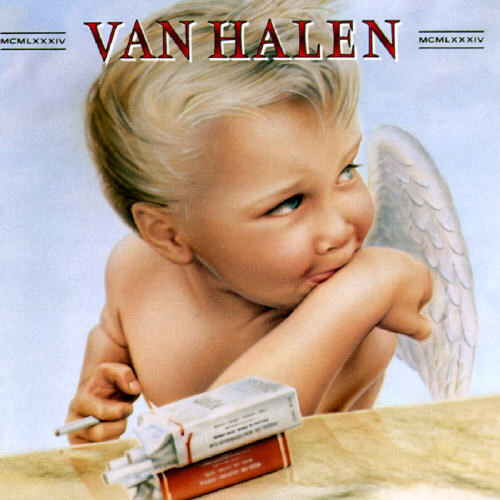 "1984" (written as "MCMLXXXIV" on the front cover) is the sixth by American band . One of the band's more popular albums (in terms of both record sales and chart performance), "1984" is the final album featuring singer , who later left the band in the spring of the following year over escalating tensions between him and guitarist , as well as Roth's desire to pursue a solo career.

"1984" peaked at #2 on the "Billboard Magazine" album charts (#1 at the time was "Thriller", which featured an Eddie Van Halen guitar solo on "," which Roth had criticized [cite web |url=http://www.myguitarsolo.com/Players/EddievanHalen.htm |title=Eddie van Halen |accessdate=2007-08-12] ) and contained future hits "Jump", "Panama", "", and "". "Jump" reached #1 on the magazine's singles chart.

Eddie Van Halen, well-known for his guitar prowess but also a classically-trained pianist, used "1984" as an opportunity to take the band into different territory. Eddie Van Halen's keyboard playing is more prominent on "1984" than on any prior Van Halen album, particularly on the songs "Jump," "I'll Wait" and instrumental album-opener "1984."

Additionally, "1984" was the first Van Halen album to be recorded at Eddie Van Halen's home studio, 5150. The studio lent its name to Van Halen's next album, the first with former Montrose vocalist/guitarist and solo artist .

"1984" is the second of two Van Halen albums to have sold 10 million copies in the United States. "Jump" was one of the most successful songs of 1984 and was on the 10 most played songs on the radio that yearFact|date=March 2007. As a single, it sold over three million copies alone, making it one of the most popular rock songs of that decade.

"Panama" was the third single from the album and reached number 13 on the singles chart in June.

The keyboard driven "I'll Wait" was another single, reaching number 13 on the singles chart in March of 1984.

"Hot for Teacher", a humorous song about a grade-school crush, was also a hit, reaching #56 on the Billboard Hot 100, as well as spawning a popular MTV video starring pre-teen lookalikes of the band members.

Other tracks included on "1984" include the title track "1984", a short synth and effects instrumental (the effects had been used as part of Michael Anthony's live bass solo on the tour); "Girl Gone Bad", parts of which previously had been played during the same tour during performances of "Somebody Get Me A Doctor" (Most famously at the US Festival show); the hard rock "Drop Dead Legs", and "Top Jimmy", a tribute to James Paul Koncek of the band . The album concludes with "House of Pain", a fast paced heavy song that dates back to the band's early club days of the mid '70s.

A Note on Songwriting Credits

The 's original release credits all songs to Edward Van Halen, , Michael Anthony and David Lee Roth. A misprint of the label on the UK single release for "I'll Wait" (cat. # W9213) mistakenly credited as a co-writer. He was not credited on the US version of the single (cat. # 7-29307).

Songs from this album which appeared on compilations released after a royalty renegotiation with the band's label Warner Brothers ("Best of Van Halen, Volume 1", 1996) and a lawsuit brought by David Lee Roth (during the preparations for the "Best of Both Worlds" compilation, 2004), were credited to Edward Van Halen, Alex Van Halen and David Lee Roth, with Michael Anthony's name removed from the credits, as evident in the end song credits of the 2007 film "Superbad". Subsequently, Anthony has been removed from all songwriting credits on the 1984 album.

The entry for the album on the ASCAP database [" [http://www.ascap.com/ace/search.cfm?requesttimeout=300&mode=results&searchstr=440151962&search_in=i&search_type=exact&search_det=t,s,w,p,b,v&results_pp=30&start=1 1984] ." ASCAP, 2008.] (American Society of Composers, Authors and Publishers) lists the songwriters for all songs as (alphabetically by surname) David Lee Roth, Alex Van Halen and Edward Van Halen. Like many bands starting out on their career, Van Halen shared songwriting credit equally between all members (including guitar instrumentals, which were clearly composed only by Edward Van Halen), but subsequent claims would lend credibility to the view that all songs were entirely or predominantly written by Edward Van Halen (music) and David Lee Roth (lyrics and vocal melody).

In 2004, Roth discovered that the rest of the band had renegotiated a more preferential royalty rate with Warner Brothers for all releases made during his time as lead singer, giving them a royalty rate five times greater than his. [Halbert, James. " [http://www.vhnd.net/articles/040413-02.shtml The Gripes of Roth] ." "Classic Rock," 13 April 2004.] It is likely that the removal of Michael Anthony from the songwriting credits results from Roth's claim to have a greater claim of the band's song publishing for this album, due to the fact that he had been cut out of the separate royalty renegotiation with Warner Brothers Records, which according to Roth happened around 1994.

The album has received the following s:

*This is only one of two Van Halen albums with a (the other being "5150").
* Some retail stores in the UK refused to stock the album due to its cover. A sticker was placed over the artwork.
* Panama is actually a nickname David Lee Roth gave his 1969 Opel Kadette Station wagon. Dave had the car mounted and attached to his wall in the hallway of his home. Dave purchased a fake deer from Ellis Mercantile (a Hollywood Prop house) which was sawed in half, and had the rear end of the deer mounted in the windshield. He wanted the car to appear as if it had hit the deer and came crashing through his wall. The hooves of the deer were painted blue, "Blue Suede Hooves" and a small plaque appears at the bottom saying, "My first deer courtesy of Panama."
* You can see a bit of the car in Dave's video for "Shoo Bop".
* The engine noise heard during "Panama" was from Eddie revving up his Lamborghini. Microphones were used near the tailpipes.
* Top Jimmy was based on an actual person. There was a local LA bar band that went under the name,
* The voice of "Waldo" in the "Hot For Teacher" video was done by .
* David Lee Roth claimed that Jump was written for several reasons. Roth claimed that he was watching the news when he saw a man about to jump 30 stories off the Arco Towers. Roth said the crowd below was yelling at the man not to jump, but in his mind he was telling himself that the man might as well jump. Roth also claimed that it was leap year.
* The video for "Jump" was directed by and cost $600, the majority of which was spent on beer. The video was shot on a hand held 16 millimeter Bolex.
* A different version of "House of Pain" appears on the band's financed 1976 demo (along with "Runnin' With The Devil"). Although the signature guitar riff of the chorus remained unchanged, the "1984" version is otherwise significantly different, featuring a new introduction, different music and vocal melody for the verse, and an extended solo section. Also, the lyrics are about a relationship gone bad (and possibly S&M sex) whereas the 1976 version seems more horror-oriented (featuring an early "death grunt" vocal by Roth).