Interstate 295 (I-295) is a connector route within New York City. Measuring 9.10 miles (14.6 km) in length, I-295 travels from the Bruckner Interchange, a junction with I-95/I-278/I-678 in The Bronx, across the toll Throgs Neck Bridge to the Grand Central Parkway in Queens. Along the route, 295 meets with I-695 (Throgs Neck Expressway), the Cross Island Parkway, and I-495 (the Long Island Expressway). In Queens, I-295 is also known as the Clearview Expressway. The highway's southern terminus is a traffic signal at Hillside Avenue (NY 25) in the Queens neighborhood of Queens Village, however the original plan was to extend it further south to JFK Airport. The 0.8-mile (1.3 km) JFK Expressway was intended to be part of the Clearview, but was only constructed as far north as Belt Parkway.

The existing section of the Clearview Expressway that carries the I-295 designation begins at the unfinished interchange with NY 25, and instantly runs beneath a stack interchange with the Grand Central Parkway before immediately entering Cunningham Park. The Clearview leaves Cunningham Park at the interchange with Long Island Expressway, which used to be the eastern terminus of I-495 until the mid-1980s. The northbound off-ramp and southbound on-ramp at NY 25A run under a pedestrian bridge that connects 46th Avenue. Other pedestrian bridges cross over Clearview near 42nd Avenue and at 33rd Avenue. The northbound off-ramp uses 206th Street as a de-facto service road, while 207th Street is used in the same way for the northbound on-ramps. Real service roads run beneath the Port Washington Branch of the Long Island Rail Road to connect NY 25A and 35th Avenue (exit 6A). The northbound partial interchange with Willets Point & Bell Boulevards leads to Cross Island Parkway while a southbound interchange leads to the southbound Cross Island Parkway, all before reaching the Throgs Neck Bridge.

After the Throgs Neck toll booth, I-295 becomes part of the Cross Bronx Expressway. Northbound access to Harding Avenue and Pennyfield Avenue is barley noticeable compared to the Y-interchange with I-695 (Throgs Neck Expressway), which takes motorists to northbound I-95. The only other interchange between there and the terminus is Randall Avenue. Interstate 295 finally ends at its parent route at the Bruckner Interchange, but only includes access to southbound I-95, and Interstate 278. 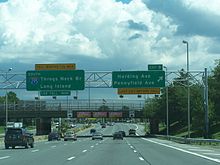