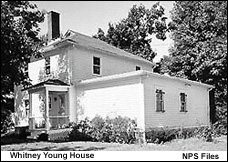 caption = The Whitney Young Birthplace and Museum
nearest_city=
locmapin = Kentucky
area =
built =1921
architect= Unknown
architecture= No Style Listed
added = ,
governing_body = Private
refnum=72000543The Whitney Young Birthplace and Museum was the birthplace and childhood home of Whitney M. Young, Jr., an American leader. The simple wooden house in , near Louisville, is on the campus of the former , an all-black high school that Young attended and Young's father led.

Young was born in the house in 1921 and lived there through his high school years. [ [http://www.nps.gov/history/nr/travel/civilrights/ky2.htm We Shall Overcome - Whitney M. Young Birthplace ] ] After Young's death in 1971, the house was dedicated as shrine to his memory. Today, numerous photographs, articles, and other items related to Young and the Lincoln Institute are on display inside the house.

The house appears on the and was designated as a in 1984.