Oroville Dam spans the Feather River about 5 miles (8.0 km) northeast of the city of Oroville, California. It forms Lake Oroville, which stores water for irrigation, flood control, municipal water supply and hydroelectricity generation in California's Sacramento Valley. The dam lies in the foothills of the Sierra Nevada, and at 770 feet (230 m) tall, is the tallest dam in the United States. It powers the third largest hydroelectric plant in California, after the Castaic and Shasta Dams.

Consensus for the dam started in the early part of the 20th century with the growing irrigation needs of the Central Valley. The Feather, Sacramento and other rivers flow through the vast basin, providing water for thousands of acres of fertile farmland. However, California's unreliable precipitation caused serious droughts in some years and severe floods in others. During the Great Depression in the 1930s, plans for two federal water management projects, the U.S. Army Corps of Engineers' California State Water Project (SWP), and the U.S. Bureau of Reclamation's Central Valley Project (CVP), arose.

During surveys in the 1950s, Oroville and Shasta Dams were identified as key facilities for water management in California, because of their capability to control the flow of California's largest river system, the Sacramento. Oroville became the primary feature of the State Water Project, and construction started in 1961. In 1964, a major flood tore through the Oroville Dam site, further demonstrating the need of the project; one year later, a massive train crash occurred along the rail line used to transport materials to the dam site. Despite damages, the dam was finished in 1968, creating the second largest reservoir in California (after Shasta).

Despite its multiple benefits, the dam has heavily hurt the ecosystem of the Feather River, especially because it blocks migrations of chinook salmon and steelhead trout, which once thrived in great abundance in the Sacramento watershed. Construction of the dam has also reduced the flow fluctuations between spring and autumn in the Feather that once were responsible for rearranging sediments and clearing old growth on the riverbanks; it has indirectly led to environmental impacts by promoting heavy development of agricultural and urban areas.

The Central Valley of California has been the state's most important agricultural region throughout its history, especially in the fertile and water-rich southern Sacramento Valley. Three major rivers, the Sacramento, Feather and American, flow through the valley, providing water to the flourishing irrigated lands around them. However, historically the rivers were known for intense flow fluctuations – in some years, floods would inundate the valley, destroying crops, killing people and livestock, spreading waterborne disease and causing property damage – while in others severe droughts would cause bad harvests and starvation.[citation needed]

A majority of California's precipitation falls in the north, and as a result the south is more parched and arid. However, the milder climate of the south has attracted people to live there, and in the beginning of the 20th century the Los Angeles Aqueduct was built, bringing water to thirsty Southern California. However, the capacity of the aqueduct was not sufficient to sustain the growing population of the area for long. As a result cities in the south looked to the abundant rivers of the north to draw their water supply from; however, the sheer distance of the water from the people made diversions on a less than statewide scale practically impossible.

Northern California's water resources were first thoroughly studied in 1873 by Colonel B.S. Alexander of the U.S. Army Corps of Engineers. Alexander compiled a report detailing the drainage areas, discharges and hydrography of major Northern California rivers, specifically the Sacramento and the Feather, the state's first and fifth[1] largest rivers by discharge, respectively. During the late 19th century and early-to-mid-20th century, public opinion for a dam increased with the occurrence of major floods and droughts. A large dam like Oroville could impound rainy-season water, thereby preventing floods, and release it during the dry season, thereby moderating the effects of droughts and providing a stable year-round flow.[citation needed]

In the 1930s, a bill was passed in Congress allowing construction of facilities of the Central Valley Project, a water management project for the Central Valley designed by the U.S. Bureau of Reclamation. By 1940 there was growing pressure for a dam on the Feather River and the construction of an aqueduct to the south.The Burns-Porter Act or California Water Resources Development Bond Act was proposed in 1960 and barely went through by a slim margin – Northern Californians generally opposed the bill because they were afraid that their water supplies were being "stolen" by Southern Californians. Engineer Donald Thayer of the California Department of Water Resources was commissioned to design a dam on the Feather River at Oroville. Despite frequent floods and opposition from area residents, construction work on Oroville Dam started in 1961.

New Bidwell Bar Bridge, built in 1965, spans an arm of Lake Oroville, which was once a canyon of the Middle Fork Feather River some 600 feet (180 m) deep.

Establishment of the Oroville Dam site began in 1957 with the construction of a pair of tunnels to relocate part of the Western Pacific Railroad tracks, which ran through the Feather River valley and would be inundated by the future reservoir.[2] As California State Route 162's route also placed it within the proposed Lake Oroville area, construction began on the New Bidwell Bar Bridge crossing the canyon of the Middle Fork Feather River, which in a decade would be inundated by the rising waters of Lake Oroville. The bridge was not completed until 1965; for several years, it stood over 600 feet (180 m) above the river as construction on the dam began.[citation needed]

Official groundbreaking of the dam was in 1961, with dynamite charges set off to clear the canyon walls of obstructions. A low earthen cofferdam was constructed to keep the river out of the construction site, and the water was diverted into two tunnels around the area. The 128 ft (39 m) high concrete core of the dam, also serving as protection against floods, was built first. After the foundations were complete, engineers identified sources of soil and rock fill that would be used for the construction of the main dam. A large part of the fill came from massive piles of debris left behind by intensive hydraulic mining during the California Gold Rush in the mid-19th century. To bring the material to the dam site, a special 11-mile (18 km) railway was constructed, and trains ran busily along the line, transporting 120 carloads of dirt every hour.[3]

Thirty-five people died while building the Oroville Dam, many because of the dangers associated with the heavy equipment used in the construction site. In December 1964, heavy rainstorms that caused record flood levels in rivers all over California caused the Feather River to flood, nearly destroying the Oroville Dam site, but the diversion tunnels were able to pass just enough flow to keep the cofferdam from overtopping before the inflow decreased.[citation needed] However, the largest and costliest tragedy that occurred as the dam rose was a train collision on October 7, 1965. Two trains – one heading southwards from the Oroville Dam site, having unloaded its cargo of earthfill, the other rolling north along the line with a full load of dirt and rocks – collided at the south entrance of a tunnel along the Feather River rail line. The southbound locomotive crashed into the northbound and ran over the front of it, and the thousands of gallons of diesel fuel inside created an enormous explosion. Four people were killed in the crash.[4]

Fortunately, no other accidents on a remotely similar scale ever occurred again during construction of the dam. Afterwards, the trains operated without incident; the dam was finally completed on October 6, 1967 after the pouring of 41,315 trainloads of material.[citation needed] As Lake Oroville began to fill, construction commenced on the dam's spillway and its hydroelectric plant, the Edward Hyatt Powerplant. The spillway was finished in 1968, and drilling of the underground facility was completed two years later in 1970.[citation needed]

The dam originally cost $187.8 million to build; however, as a result of the multi-purpose nature of the dam (designed to provide water supply, flood control, power generation, and fish and wildlife enhancement), the total costs were $563.8 million. It took another two years for the cleanup to be completed.

The dam's power plant has six generators which are fed by water from intakes on Lake Oroville. Three of these are conventional hydroelectric turbines and the other three comprise the dam's pumping-generating capability. During times of low power demand, large pumps take water from the Feather River below the Oroville Dam and push it back into Lake Oroville. During peak power demand, the flow is reversed to generate electricity. The nameplate capacity of Oroville's hydroelectric plant is 645 MW, slightly less than the Shasta Dam, which produces 676 MW.

The Oroville Dam is operated in conjunction with the downstream Oroville-Thermalito Complex, which consists of a complex series of small dams, diversions, pumps, and generators built in and around the Feather River. Directly below the dam lies Thermalito Diversion Pool, from which water is diverted through a canal to irrigate agricultural fields in the Feather River valley and to supply the Thermalito Forebay and Thermalito Afterbay. Power is generated from the drop in elevation between the first two reservoirs and from the latter into the Feather River. The electricity generated from the complex brings the total amount of power produced by Oroville facilities to 760 megawatts.

Because of the Feather River's high fluctuations in flow, releases from Oroville Dam are coordinated so as to maintain a stable flow in the Feather River below the dam as much as possible. The drainage basin of the Feather above Oroville Dam comprises nearly two-thirds of the total watershed. Typically, the reservoir is kept at a high elevation throughout the summer and drawn down by at least a third of capacity in the winter in preparation for floods. Winter storms and spring snowmelt then replenish Lake Oroville, filling the reservoir; in this way floodwater is trapped behind the dam for later releases during the summer low water season. During severe storm events, however, such as the winter of 1996-97, the dam's spillway must be opened, potentially causing flooding downstream. 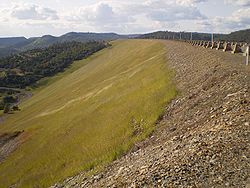 The Oroville Projects powerplant (Edward Hyatt Powerplant) works in tandem with another nearby power facility, Thermalito Pumping-Generating Plant; together they have a licensed hydro-power capacity of 760 MW and actually produce around 2.2 billion kWh of energy annually.

It was not known until 1975, when a magnitude 6.1 earthquake occurred near Oroville, that the dam sits on top of an active faultline. This caused serious questions to be asked regarding the Auburn Dam which was just beginning construction at the time and was never built as a result of the possible geologic risk.