:"This article refers to the science fiction writer. For the actor, see " 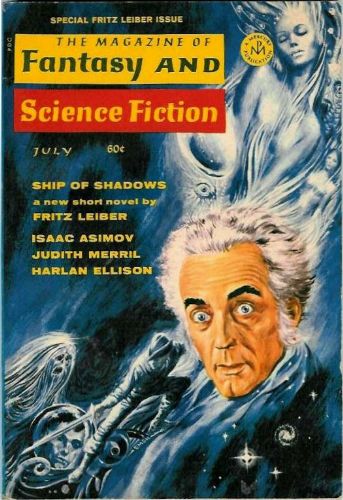 Fritz Reuter Leiber Jr. (, –, ) was an influential American writer of fantasy, horror and . He was also an expert player and a champion fencer.

Leiber (first syllable rhymes with "shy") married Jonquil Stephens on , , and their son was born in 1938. His first fantasy story, "Two Sought Adventure" (1939), introduced his most famous characters, . His work as a writer earned much praise but little money, a problem exacerbated by bouts of . Jonquil's death in 1969 precipitated a three-year drunk, but he returned to his original form with a fantasy novel set in modern-day , "Our Lady of Darkness" — serialized in "" as "The Pale Brown Thing" (1977) — in which cities were the breeding grounds for new types of s called paramentals, summonable by the dark art of , with such activities centering around the . "Our Lady of Darkness" won the .

In the last years of his life, Leiber married his second wife, Margo Skinner, a journalist and poet with whom he had been friends for many years. Many people believed that Leiber was living in poverty on skid row, but the truth of the matter was that Leiber preferred to live simply in the city, spending his money on dining, movies and travel. In the last years of his life, royalty checks from TSR, the makers of , who had licensed the mythos of the "Fafhrd and Gray Mouser" series, were enough in themselves to ensure that he lived comfortably.

Leiber's death occurred a few weeks after a physical collapse while traveling from a science-fiction convention in London, Ontario with Skinner. The cause of his death was given as "organic brain disease."

Leiber and the theater

As the child of two Shakespearean s—Fritz, Sr. and Virginia (née Bronson)—Leiber was fascinated with the stage, describing itinerant Shakespearean companies in stories like "No Great Magic" and "Four Ghosts in Hamlet," and creating an actor/producer protagonist for his novel "".

Although his "Change War" novel, "The Big Time", is about a war between two factions, the "Snakes" and the "Spiders", changing and rechanging history throughout the universe, all the action takes place in a small bubble of isolated about the size of a theatrical stage, with only a handful of characters. "The Big Time" contains an apparent numerical typo; in one chapter-head quotation it is stated that 100,000 metres equals 5.6 miles. (It should be about "60" miles.) No American or British editor has ever corrected this.

(in the July 1969 issue of "The Magazine of Fantasy & Science Fiction") remarks on Leiber's acting skills when the writer won a science fiction convention costume ball. Leiber's costume consisted of a cardboard military collar over turned-up jacket lapels, cardboard insignia, an armband, and a spider pencilled large in black on his forehead, thus turning him into an officer of the Spiders, one of the combatants in his Change War stories. "The only other component," Merril writes, "was the Leiber instinct for theatre."

Leiber was heavily influenced by and in the first two decades of his career. Beginning in the late 1950s, he was increasingly influenced by the works of , particularly by the concepts of the anima and the shadow. From the mid-1960s onwards, he began incorporating elements of Joseph Campbell's "The Hero with a Thousand Faces". These concepts are often openly mentioned in his stories, especially the anima, which becomes a method of exploring his fascination with but estrangement from the female.Fact|date=May 2008

Leiber had a lifelong love affair with cats, which feature prominently in many of his stories. Tigerishka, for example, is a cat-like alien who is sexually attractive to the human protagonist yet repelled by human customs in the novel "The Wanderer". Leiber's "Gummitch" stories feature a kitten with an I.Q. of 160, just waiting for his ritual cup of coffee so that he can become human, too.

Many of Leiber's most-acclaimed works are short stories, especially in the horror genre. Due to such stories as "The Girl With the Hungry Eyes" and "You're All Alone" (AKA "The Sinful Ones"), he is widely regarded as one of the forerunners of the modern urban horror story. ( cites him as his single biggest influence. [http://www.cold-print.freeserve.co.uk/ramsey.htm] ) In his later years, Leiber returned to short story horror in such works as "Horrible Imaginings", "Black Has Its Charms" and the award-winning "The Button Moulder."

The short parallel worlds story "Catch That Zeppelin!" (1975) added yet another Nebula and Hugo award to his collection. This story shows a plausible alternate reality that is much better than our own, whereas the typical parallel universe story depicts a world that is much worse than our own. "Belsen Express" (1975) won him another World Fantasy Award. Both stories reflect Leiber's uneasy fascination with Nazism -- an uneasiness compounded by his mixed feelings about his German ancestry and his philosophical pacifism during World War II.

Fans awarded him the Gandalf (Grand Master) award at the World Science Fiction Convention in 1975, and in 1981 the voted him the recipient of their Grand Master award.

He was also a member of the , a loose-knit group of Heroic Fantasy authors founded in the 1960s, some of whose works were anthologized in 's "" anthologies.

In an appreciation in the July 1969 "Special Fritz Leiber Issue" of "The Magazine of Fantasy & Science Fiction", Merril writes of Leiber's connection with his readers::That this kind of "personal" response... is shared by thousands of other readers, has been made clear on several occasions. The November 1959 issue of "Fantastic", for instance: Leiber had just come out of one of his recurrent dry spells, and editor Cele Lalli bought up all his new material until there was enough [five stories] to fill an issue; the magazine came out with a big black headline across its cover — "Leiber Is Back!"

Fafhrd and the Gray Mouser

His legacy appears to have been consolidated by the most famous of his creations, the "Fafhrd and the Gray Mouser" stories, written over a span of 50 years. The first of these, "Two Sought Adventure", appeared in "Unknown" in 1939. They are concerned with an unlikely pair of heroes found in and around the city of . (Fafhrd was based on Leiber himself and the Mouser on his friend Harry Otto Fischer, and the two characters created in a series of letters exchanged by the two in the mid-1930s) These stories were among the progenitors of many of the tropes of the genre (a term coined by Leiber). They are also notable among sword and sorcery stories in that, over the course of the stories, his two heroes mature, take on more responsibilities, and eventually settle down into marriage.

Leiber's "Fafhrd and Gray Mouser" stories were also award winners and nominees: "Scylla's Daughter" was nominated for a Hugo (1961), and the Hugo and Nebula awards were awarded to "Ill Met in Lankhmar" (1970). Fittingly, Leiber's last major work, "The Knight and Knave of Swords" (1991) brought the series to a satisfactory close while leaving room for possible sequels. In the last year of his life, Leiber was considering allowing the series to be completed by another writer, but his sudden death put an end to the idea.

The stories were influential in shaping the genre and were influential on other works. ' stories about thief-assassin Alyx (collected in 1976 in "") were in part inspired by Fafhrd and the Gray Mouser, and Alyx in fact made guest appearances in two of Leiber's stories. Numerous writers have paid homage to the stories. For instance, 's city of bears something more than a passing resemblance to Lankhmar (acknowledged by Pratchett by the placing of the swordsman-thief "The Weasel" and his giant barbarian comrade "Bravd" in the opening scenes of the first novel).