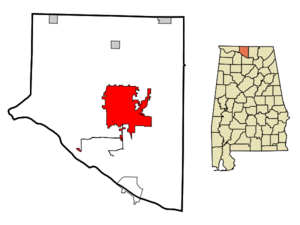 mapsize = 250px
map_caption = Location in the state of Alabama, USA

Athens is one of the oldest incorporated cities in the State of , having been incorporated one year prior to the state's admittance to the Union in 1819. Limestone County was also created by an act of the Alabama Territorial Legislature in 1818. [ [http://www.archives.state.al.us/counties/limeston.html Alabama State Archives: Limestone County] ]

The Athens area was the home of William Wyatt Bibb, the first Governor of Alabama, and of its second Governor, his brother Thomas Bibb, who succeeded him in office when he died in a fall from his horse. [ [http://www.marker.limestonecountyhistoricalsociety.org/html/belle_mina.html Limestone County Historical Society: Belle Mina] ]

In 1822, local residents purchased five acres of land and built a building to house the Athens Female Academy. The school became affiliated with the Methodist church in 1842, and was eventually renamed Athens Female College. After becoming coeducational in 1932, the school changed its name again to Athens College. After being taken over by the State of Alabama in 1974, the college was converted to a “reverse junior college,” offering the last two years of instruction for graduates of area community colleges. It is today known as Athens State University. [ [http://www.athens.edu/about/history.php Athens State University: History] ]

Many homes in the central part of modern Athens date to the antebellum period, and are part of historic preservation districts. [ [http://www.athensal.us/commissions/Historic/historic_dist_map.pdf City of Athens: Map of Historic Districts] ]

In May of 1862, during the Civil War, Athens was seized by Union forces under the command of Col. John Basil Turchin, a Russian émigré. The resulting pillage and plunder came to be known as the Rape of Athens. Homes were looted and burned, and Union horses were stabled in local churches. The occupation was eased after Turchin’s superiors intervened. [ [http://www.marker.limestonecountyhistoricalsociety.org/html/athens_sacked.html Limestone County Historical Society: Athens Sacked] ]

Athens was the home of Governor George Houston, Alabama’s first post-Reconstruction Democratic governor from 1874 through 1878. Houston was noted for reducing the debts incurred to benefit private railroad speculators and others by his Reconstruction Republican predecessors. [ [http://www.archives.state.al.us/govs_list/g_housto.html Alabama State Archives: Gov. George S. Houston] ] During Reconstruction, Athens was the home of the Trinity School, a school founded for the children of former slaves by the American Missionary Association. [ [http://www.marker.limestonecountyhistoricalsociety.org/html/trinity_cistern.html Limestone County Historical Society: Trinity School] ]

Athens was traditionally a and town, but since the local boom of the 1950s and 1960s it has increasingly entered the orbit of nearby industry center Huntsville as the area's cotton production has steadily declined.

In 1934, Athens became the first city to get its electricity from the .

Athens is the home of , a Tennessee Valley Authority installation first operated in 1974, that was once the world's largest . It provides many jobs to the area and most of the electricity for the . On March 22, 1975, the Browns Ferry plant became the scene of what was, with the exception of the incident, the most serious nuclear accident in United States history. A worker using a candle to check for air leaks started a fire among control wires, causing a temporary threat to operational control of the reactor. [ [http://www.nrc.gov/reading-rm/doc-collections/gen-comm/bulletins/1975/bl75004a.html Nuclear Regulatory Commission: Bulletin No. 75-04A: Cable Fire at Browns Ferry Nuclear Power Station] ]

There were 7,742 households out of which 30.5% had children under the age of 18 living with them, 50.0% were married couples living together, 13.0% had a female householder with no husband present, and 33.6% were non-families. 31.0% of all households were made up of individuals and 13.2% had someone living alone who was 65 years of age or older. The average household size was 2.37 and the average family size was 2.97.