Kep (also known as Keb or Kep-sur-Mer by the French) is a municipality in with the status of a province. It is subdivided into two districts. Kep, which is located just a few kilometers from , the border with , used to be Cambodia's most popular and prestigious beach town but has fallen on hard times in recent years. From the early 1900's until the 1960's, Kep was a thriving resort town for the rich French and Cambodian elite. During the years, much of Kep's French colonial era mansions and villas were destroyed. Many of Kep's villas are abandoned, but some of the town's former splendor is still apparent. The ocean is lined with wide sidewalks and large statues that now seem largely out of place. The king built a palace overlooking the , but it was never furnished and now sits empty. A good, paved road connects the town with Kampot. Kep's beaches are mostly mangrove and black rock rather than the white sands of , but is just a short boat ride away. Kep appears to be experiencing something of a renaissance, with several mid-range and luxury guesthouses and bungalows recently open or under construction. The town's seafood is cheap, plentiful and delicious - particularly the crabs. In addition, Kep is home to an extensive national park.

Electricity
Kep City has very little in the way of city infrastructure. .Up until early 2005 Kep had electricity which was supplied by a diesel generator between 7pm and 9pm every night. Since then, all businesses operating in Kep have had to generate their own electricity. This will change in the near future with power being imported from Vietnam. First reported to be finished in December 2005, the installation of power has been subsequently delayed in the following order: April 2006, December 2006, April 2007, June 2007. As at the writing of this supplement, power poles have been erected and power lines have been strung - rumour has it the town governor has power already. As of July 2007 almost everybody has power coming from Vietnam at a rate of 800 Riel per kWh.

Water
Kep City has no town water supply at this stage. Homes and Businesses have their own wells.

Sewerage
Kep City has no sewerage management system at this stage. All homes and businesses must take care of their own waste.

Television Services
Kep City has no television services at this stage.

is located about 4.5 Kilometers southwest of Kep. Tourists are drawn to the two beautiful white sand beaches. The sea here is shallow and has a long slope, making Koh Tonsay excellent for swimming. At the sea bottom area a variety of corals, sea animals and plants which attract researchers and ecologists.

The name Koh Tosay is derived from the word Rumsay3. While trying to avoid the commander’s troops, Prince Sakor Reach grew hopeless because his own troops began to tire. He led his remaining troops across the sea to an island in front of [http://www.kepcity.com Kep city] , where the troops spread out. Accordingly, the island was called Koh Rumsay, the Koh Ormsay or Koh Ornsay, and the Koh Tonsay, as it is known today.

Koh Tonsay is 2 square Kilometers. During then-Prince Norodom Sihanouk’s Sangku Reastr Niyum regime, it was used as a place to rehabilitate criminals, who were also used to defend the island. Horse cart paths and wooden, thatch roofed motels were also constructed during this time. Most of this infrastructure has been destroyed by weather and decades of war. Today, seven families live on the island. They earn their living by fishing and growing coconut trees. 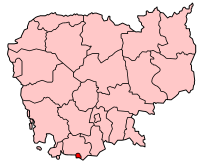