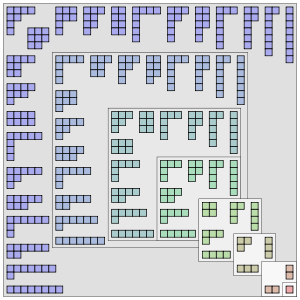 Young diagrams associated to the partitions of the positive integers 1 through 8. They are so arranged that images under the reflection about the main diagonal of the square are conjugate partitions.

In number theory and combinatorics, a partition of a positive integer n, also called an integer partition, is a way of writing n as a sum of positive integers. Two sums that differ only in the order of their summands are considered to be the same partition; if order matters then the sum becomes a composition. For example, 4 can be partitioned in five distinct ways:

A summand in a partition is also called a part. The number of partitions of n is given by the partition function p(n). The notation p ⊢ n means that p is a partition of n. So p(4) = 5.

Partitions can be graphically visualized with Young diagrams or Ferrers diagrams. They occur in a number of branches of mathematics and physics, including the study of symmetric polynomials, the symmetric group and in group representation theory in general.

The partitions of 4 are:

In some sources partitions are treated as the sequence of summands, rather than as an expression with plus signs. For example, the partition 2 + 1 + 1 might instead be written as the tuple (2, 1, 1) or in the even more compact form (2, 12) where the superscript indicates the number of repetitions of a term.

As of September 2011[update], the largest known prime number that counts a number of partitions is p(60016427), with 8622 decimal digits, found by Bernardo Boncompagni.[1]

One way of getting a handle on the partition function involves an intermediate function p(k, n), which represents the number of partitions of n using only natural numbers at least as large as k. For any given value of k, partitions counted by p(k, n) fit into exactly one of the following categories:

The number of partitions meeting the first condition is p(k, n − k). To see this, imagine a list of all the partitions of the number n − k into numbers of size at least k, then imagine appending "+ k" to each partition in the list. Now what is it a list of? As a side note, one can use this to define a sort of recursion relation for the partition function in term of the intermediate function, namely

is the floor function.

The number of partitions meeting the second condition is p(k + 1, n) since a partition into parts of at least k that contains no parts of exactly k must have all parts at least k + 1.

Since the two conditions are mutually exclusive, the number of partitions meeting either condition is p(k + 1, n) + p(k, n − k). The recursively defined function is thus:

The values of this function:

A generating function for p(n) is given by the reciprocal of Euler's function:

Expanding each term on the right-hand side as a geometric series, we can rewrite it as

where each number i appears ai times. This is precisely the definition of a partition of n, so our product is the desired generating function. More generally, the generating function for the partitions of n into numbers from a set A can be found by taking only those terms in the product where k is an element of A. This result is due to Euler.

The formulation of Euler's generating function is a special case of a q-Pochhammer symbol and is similar to the product formulation of many modular forms, and specifically the Dedekind eta function. It can also be used in conjunction with the pentagonal number theorem to derive a recurrence for the partition function stating that:

Srinivasa Ramanujan is credited with discovering that "congruences" in the number of partitions exist for integers ending in 4 and 9.

Since 5, 7, and 11 are consecutive primes, one might think that there would be such a congruence for the next prime 13,

for some a. This is, however, false. It can also be shown that there is no congruence of the form

In the 1960s, A. O. L. Atkin of the University of Illinois at Chicago discovered additional congruences for small prime moduli. For example:

An asymptotic expression for p(n) is given by

In 1937, Hans Rademacher was able to improve on Hardy and Ramanujan's results by providing a convergent series expression for p(n). It is

It can be shown that the derivative part of the sum can be simplified. [3] Here, the notation (m, n) = 1 implies that the sum should occur only over the values of m that are relatively prime to n. The function s(m, k) is a Dedekind sum. The proof of Rademacher's formula involves Ford circles, Farey sequences, modular symmetry and the Dedekind eta function in a central way.

In January 2011, it was announced that Ono and Jan Hendrik Bruinier, of the Technische Universität Darmstadt, had developed a finite, algebraic formula determining the value of p(n) for any positive integer n.[4] [5]

q m kqm be a pentagonal partition of n, where each qm = m(3m-1)/2 is a generalized pentagonal number (GPN) with qM being the largest GPN less than or equal to n. Then[6]

is a multinomial coefficient. The number of terms in the sum for p(n) is sequence

The value of p(n) for any n can be found from the formula:

I.e., p(n) is the determinant of the n X n truncation of the infinite-dimensional Toeplitz matrix shown above. The only non-zero diagonals of this matrix are those which start on a row labeled by a generalized pentagonal number qm. (The superdiagonal is taken to start on row "0".) On these diagonals, the matrix element is (-1)m+1. This determinant formula is equivalent to the matrix relation,

which is simply the generating-function equation above (plus the pentagonal number theorem) translated into matrix form.

By using the identity by Ramanujan,[7]

the partition function p(5k-1) can be expressed alternatively as the determinant of a lower, k-dimensional matrix:

The numbers making up the first column correspond to sequence

A000729, while every fifth element (after the initial "1") in the last column is from sequence

In a like fashion, by using two other identities by Ramanujan, the partition functions p(7k-2) and p(25k-1) can also be expressed as k-dimensional determinants:

where the first column in each matrix is sequence

A010836, respectively, and the last column in each is from the expansions:

The nth partial sum of the partition function is given by

The partition function for partitions into distinct integers, q(n), is

where the first column is sequence

A010815, and a matrix element in the last column equals (-1) m if the row number is 2qm+1; otherwise it equals zero. (This is also the partition function for partitions into odd integers; see below.)

Among the 22 partitions for the number 8, 6 contain only odd parts:

If we count the partitions of 8 with distinct parts, we also obtain the number 6:

Some similar results about restricted partitions can be obtained by the aid of a visual tool, a Ferrers graph (also called Ferrers diagram, since it is not a graph in the graph-theoretical sense, or sometimes Young diagram, alluding to the Young tableau).

The partition 6 + 4 + 3 + 1 of the positive number 14 can be represented by the following diagram; these diagrams are named in honor of Norman Macleod Ferrers:

The 14 circles are lined up in 4 columns, each having the size of a part of the partition. The diagrams for the 5 partitions of the number 4 are listed below:

Proof (outline): The crucial observation is that every odd part can be "folded" in the middle to form a self-conjugate diagram:

One can then obtain a bijection between the set of partitions with distinct odd parts and the set of self-conjugate partitions, as illustrated by the following example:

Similar techniques can be employed to establish, for example, the following equalities:

while the Ferrers diagram for the same partition is

While this seemingly trivial variation doesn't appear worthy of separate mention, Young diagrams turn out to be extremely useful in the study of symmetric functions and group representation theory: in particular, filling the boxes of Young diagrams with numbers (or sometimes more complicated objects) obeying various rules leads to a family of objects called Young tableaux, and these tableaux have combinatorial and representation-theoretic significance.