The Tank, Cruiser, Mk V, Covenanter (A13 Mk III) was a British Cruiser tank of the Second World War. It was named for the Covenanters, a Scottish religious faction in the British Isles at the time of the Wars of the Three Kingdoms. The Covenanter was the first cruiser tank design to be given a name.

Designed by London, Midland and Scottish Railway as a better armoured replacement for the Cruiser Mark IV, it was ordered into production in 1939 before pilot models were built. Problems with the design only became apparent after production was underway.

Although it equipped British armoured divisions in the home defence and training roles, poor engine cooling made it unfit for use overseas in hot climates and it never saw combat. In 1943 it was declared obsolete after more than 1,700 had been built.

A pilot model. Note radiator covers at the left front. Note also the Valentine-type gun mantlet. Except for some early production vehicles, most Covenanters received a different mantlet as shown in the main picture at top.

In 1938, the War Office had issued a requirement for a new, better armoured cruiser tank to replace the Cruiser IV. Nuffield's A16 design was found to be too expensive, and in 1939 a cheaper and lighter cruiser tank - under General Staff specification A13 Mk III Cruiser Mark V - was chosen to be developed. It had nothing apart from Christie suspension in common with the other A13 specifications.[1]

The initial specification required a QF 2 pounder gun, at least one machine gun, Christie suspension, epicyclic transmission and "armour standard" of 30 mm. The 30 mm referred to any vertical plate having to be 30 mm thick, angled surfaces (through the principles of sloped armour) could be thinner so long as they were at least as effective as a 30 mm thick vertical plate.

From these a design using many sloped surfaces was chosen to keep the weight low. To keep the silhouette low the suspension used cranked arms and a low profile engine was envisaged. The engine to specifically designed for it was to deliver at least 300 hp. The Wilson transmission and steering of the A16 would be used.[2]

Design work was by the London, Midland and Scottish Railway Company (LMS). The design assumed a welded hull rather than the usual rivetting. The turret was designed by Nuffield, with Henry Meadows designing a new low profile engine for it. On 17 April, before even a single prototype was produced, the first 100 vehicles were ordered from the LMSR. Additional orders soon followed, with English Electric and Leyland Motors joining the production effort, for a final production total of 1,771 Covenanters.[3] Nuffield was also approached, but preferred to design its own offspring of the A13 line, which became the Cruiser Mk.VI Crusader.

Due to the expectations of an imminent war, the design was ordered "off the drawing board". The expectation was that two pilot models would serve for testing and results applied to the production lines.

To meet the engine requirement, a horizontally-opposed 12 cylinder design was used. Although flat it was wide and left no room for radiators in the engine compartment, and so the radiators were situated at the front of the vehicle. The unusual arrangement, although tested in mockup form first, when combined with the rushed design process resulted in serious problems with engine cooling. Even when the systems were redesigned there were problems and the piping from engine to the radiators heated the fighting compartment. These problems meant that the Covenanter would not be employed in the North African Campaign. Instead, Crusader and American tanks were sent to Africa, while the Covenanters remained in the British Isles.

LMS advised a return to rivetted construction due to doubts about its strength and rather than risk delays due to a lack of welders and this was accepted. The welded design used two layers of armour plate, the inner being of steel that would weld readily without losing its properties. This two plate system was retained when the design reverted to rivetted construction. The use of rivetting, along with steel wheels instead of the intended aluminium,[4] and a increase in armour specification to 40mm to the front of hull and turret increased the weight to a level where the tank suspension was already at maximum load leaving no room for later development of the design.[2]

A further change was made to the transmission. Rather than risk the availability of the combined Wilson transmission and steering affecting production, the A13 "crash" gear box was used with epicyclic steering units. This had the knock-on effect of a reduced size of cooling fan for the transmission compartment.[5]

The contracts were placed with the manufacturers in 1939. The pilot model (with welded hull) was tested with a favourable outcome in 1940; though the second pilot had cooling issues. The first deliveries of production vehicles were not until after the battle of Dunkirk. Production of turrets lagged behind that of hulls. Although the Covenanter was needed at the time, production continued even when newer better tank designs were waiting for space on production lines.[6]

By late 1943 the Covenanter was considered too weakly armed and armoured to deal with new German tanks. It was decided that neither problem could be addressed without significant changes in the design, so the tank was declared obsolete and all vehicles except the bridgelayer variant were to be scrapped.[7][3]

Except for a few trial vehicles, Covenanters were never deployed outside of the British Isles. The Covenanter was used to re-equip the British 1st Armoured Division (six armoured regiments in two brigades) which had lost most of its tanks in the Fall of France. When the 1st was sent to Egypt, the tanks were transferred to the 9th Armoured Division.[3]

Eventually a handful of vehicles were sent to the desert for service trials and were allocated to the REME for maintenance and evaluation. It is not clear if these tanks were ever used in combat although the unit markings indicate they may have been deployed alongside Kingforce with their new 6 pounder-equipped Churchill Mk III tanks.

Covenanters were also used to equip the Guards Armoured Division in 1942 and elements of the 1st Polish Armoured Division when it was formed in the UK; they were replaced before these units were sent to the frontline, except for a few bridgelayers both divisions retained and used in their advance through Belgium and the Netherlands. The only Covenanter gun armed tank known to have been lost to enemy action was that destroyed by a German air raid on 31 May 1942 in Canterbury.

The Covenanter was declared obsolete in 1943 with orders for the tanks to be scrapped, except for those modified for auxilliary roles.

The Observation Post tanks were issued to artillery units to carry Forward Observation Officers for Royal Artillery batteries. In an armoured division, there were two OP tanks for each RHA or field battery. Medium gun batteries had just one. Command tanks were similar to OP tanks, but had only two No. 19 sets - one on the regiment radio net and the other on the brigade net. 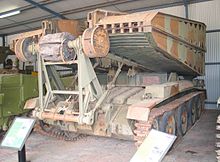 A single Covenanter gun–tank is preserved and displayed at the Bovington Tank Museum in the United Kingdom. It is displayed in the markings it had during the War when it served with the 13th/18th Royal Hussars, part of the 9th Armoured Division. For unknown reasons, it was buried after the war on a farm near Dorking. In the early–1980's it was discovered, recovered, restored and put on display at the Bovington museum.[11] The Bovington Tank Museum also has the turret from an early, Covenanter pilot model.[12] The partially-buried, wrecked hulls of two other tanks may be seen at Titchwell Marsh in Norfolk, England.[13] Now a Royal Society for the Protection of Birds nature reserve, the area was formerly a tank gunnery range and the Covenanters were likely used as targets.[14]