I Can Has Cheezburger?

I Can Has Cheezburger?
"Cheezburger" redirects here. For the food, see Cheeseburger. 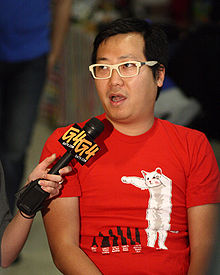 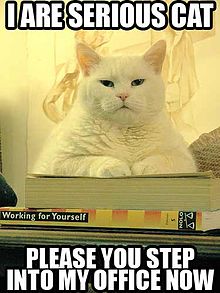 An example of an image that was posted on ICHC

I Can Has Cheezburger? (ICHC for short) is the name of a weblog featuring lolcats, which are pictures of cats or other animals with captions, paired for humor value. It was created in 2007 by Eric Nakagawa (Cheezburger), a blogger from Hawaii and his girlfriend, Kari Unebasami (Tofuburger). The website is one of the most popular internet sites displaying lolcats, receiving as many as 1,500,000 hits per day.[3][4] ICHC was instrumental in bringing animal-based image macros and lolspeak into mainstream usage.[5]

According to Time magazine, a group of investors acquired the website in September 2007 for US $2 million.[6][7]

ICHC was created on January 11, 2007, when Nakagawa posted an image from Something Awful of a smiling British Shorthair, known as Happycat, with a caption of the cat asking, "I can has cheezburger?"[8] in a style popularized by 4chan. It is from this image that the site derives its name. After posting similar images, Nakagawa then converted the site to a blog.[4]

ICHC's content is submitted by the site's readers, and hosts "the LOL Builder," a lolcat builder that allows users to create their own lolcats. The number of submissions has risen dramatically with the growth of the site. In July 2007, ICHC received as many as 500 submissions per day.[9] By January 2008, the average was 8000.[5] Only about a dozen or so submissions per day are posted to the website,[10] while updates are timed to coincide with when readers are most likely to be visiting the site - morning, lunch time and evenings.[4] As of early 2008, ICHC gets about 2 million page views per day.[11]

The site attempts to maintain a community feel, encouraging interactivity with readers via a voting system where users can rate an image from one to five "cheezburgers," and through themes as one image will attract responses to form a continuous narrative. According to Nakagawa, "It's like you're creating a story supplied by people in the community, and then the people in the community supply the next part of the story."[4] ICHC also hosts a wiki known as "The Lolspeak Wiki" designed to be a collection of important lolspeak phrases.

Popular trends on the ICHC website for captioning have included: 'ceiling cat' (usually a white cat); 'basement cat' (a black cat); the 'itteh bitteh kitteh committeh'; invisible [something]; 'I'm in your (noun), (verb ending in ing) your (noun)'; the Lolrus and his 'bukkit'; fail (now moved to FAIL Blog); 'nom' (as in eating); references to 'cheezburgers'; 'happy caturday'; ' [some activity or emotion], ur doin it right/wrong'; 'monorail kitteh'; 'oh hai'; 'I gave/brought you [something] but I eated it'; and 'kthxbai' ("OK, thanks, goodbye").

The LOL Builder is the captioning program used to make most of the captions for the ICHC, I Has a Hotdog, Fail Blog, ROFL Razzi and Pundit Kitchen sites. Using the LOL Builder requires uploading a picture to caption, or choosing one of the already uploaded images provided (with the exception of Fail Blog). Then, the picture must be captioned with one of the three builders.

With the Basic Builder, the image is captioned by placing a certain size, font, and color of text on the top, middle, or bottom of the photo. Different styles, effects, and opacity values can also be applied. With the Advanced Builder, the same text formatting is used, but the text can be placed in more specific areas of the image by using a text box. Both the title and the subtitle can use a specific font, style, and color. Also, eyes can be added anywhere on the picture in the same manner as the textboxes and speech and thought bubbles, with a large depth of customization. Once the caption is finished, it is either saved on a URL or added to the user's account, if they have one. Other users can then view the "LOL" by using the URL, or the LOL can be saved to a user account, where other users can view the LOL from the creator's page. Also, if the LOL has been saved to an account, it has a possibility of making it to one of the site's front pages.

A service is available on the site for creating an image mimicking a motivational poster, or de-motivational depending on the content added to the image. Pictures created with this builder consist of a title and a subtitle beneath the image, with a surrounding black border.

Creating images mimicking a breaking news report is also possible using the Breaking News Builder. It consists of a title, which is "Breaking News" by default, and the headline, at the bottom of the image, similar to that which is used on television news shows.

For the site GraphJam, users can use the Graph Builder to make bar/line graphs, venn diagrams and pie charts. For pie charts, the user can adjust the size of each 'slice' and change its colors and names on the legend.

This is used for the site Totally Looks Like. Here, the user can choose two pictures of people (e.g., celebrities) or art/items (e.g., album art, poster) that seem to resemble each other. Then others can vote as to whether they have a strong resemblance or not.

On the site MemeBase, users can use the Rage Comic Builder to create 4 panel "rage comics," popularized by 4chan, and Reddit.

The typeface Impact is used in almost every picture on all the I Can Has Cheezburger websites, and has even gone as far as to be attempted to be replicated in an oil painting representation of the original "Happy cat" (the original lolcat to say "I Can Has Cheezburger?") on the ICHC website. This use of the font stems from it being the font of choice in Something Awful image macros for many[12] hence it is the default font in the site's Lolcat Builder. Many people creating lolcats in other software have used the same font to retain the classic I Can Has Cheezburger look. Other standard fonts are available for use as well on the builder.

A network of related sister sites has developed alongside ICHC, called the Cheezburger Network. Twelve of these are linked to each other via a navigation bar at the top of each site. In addition to "I Can Has Cheezburger," these are:

Apart from these sites, other sites exist from the makers of "I Can Has Cheezburger," which can be found at http://cheezburger.com/sites. As of June, 2010, the Cheezburger Network has 53 sites; launching new sites is a regular project although about 20% of new sites end in failure. One famous example is a Cheezburger site named "Tofulator," which was a site in which videos are captioned, has not been updated since September 2009. No submissions have been entered as well; this might be because the majority of the videos come from Youtube, and Youtube had launched the feature of captioning a user's video as of late 2009. Another example is "Probably Bad News," which depicted funny mistakes in newspapers, but was merged with FAIL Blog. [13]

In addition to sites, ICHC has recently spawned a book publishing deal with Penguin/Gotham to produce I Can Has Cheezburger?: A LOLcat Colleckshun available for sale at the book's official website[14] and released widely on October 7, 2008. A browser toolbar was created shortly after. A second ICHC book, How To Take Over Teh Wurld: A LOLcat Guide 2 Winning, was published in 2009. Amazon.[15] Also, FAIL Blog released its first book, Fail Nation: A Visual Romp Through the World of Epic Fails, on October 6, 2009. The book is available for purchase on Amazon.[16] On April 20, I Has a Hotdog is expected to release its own book, "I Has a Hotdog."

The site was also the inspiration for LOLCODE, a computer programming language.