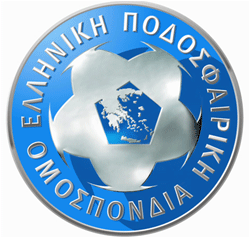 |logo
Founded = 1926
FIFA affiliation = 1927
Region =
Region affiliation = 1954
President =
Coach = , 2001-The Hellenic Football Federation (HFF) ( _el. Ελληνική Ποδοσφαιρική Ομοσπονδία - (EPO)) is the governing body of football in . It contributes in the organisation of and organizes the and the . It is based in .

The Hellenic Football Federation was founded in 1926, by a decision of the three major Unions of the country (Athens, Piraeus, Thessalonica). Its foundation marked organising the Greek football according to international standards. From that day on, H.F.F. has developed into the biggest sports federation of the country, as football in Greece is regarded as the "king of sports" occupying the first place in sports' fans preferences.

On 3 July 2006, ruled that the Hellenic Football Federation was failing to adhere to the principles of the FIFA statues regarding federations' political independence, and as a result the HFF was indefinitely suspended from international football. In response Greek officials put forward a proposed change in the law, however FIFA ruled that it too constituted an interference of the government in matters that should be under the football federation's jurisdiction. Based on this FIFA concluded that would not be able to meet its 15 July 2006 deadline and should therefore be suspended until further notice. The suspension would have meant that Greek clubs would not be allowed to participate in international competitions and that the Greek national team would not be able to participate in any international matches. [http://www.fifa.com/en/media/index/0,1369,118144,00.html?articleid=118144] [http://home.skysports.com/list.asp?hlid=400310&CPID=219&clid=517&lid=554&title=Fifa+suspend+Greece] There were also doubts cast over whether the 2007 UEFA Champions League Final will be played at the Olympic Stadium as previously scheduled. [http://www.mastercard.com/football/ucl/news/news_detail22.html]

On the 7 July 2006, however, the Greek Government ratified a new version of the sports law [http://www.spiegel.de/sport/fussball/0,1518,426387,00.html] , granting the HFF independence - and thus adherence to statues. FIFA announced the lifting of its ban that day, judging that the amendments adhered to FIFA and UEFA statutes. This will allow Greece to defend their European Championship in 2008 and also allow Greek clubs to participate in European competitions.

* The Federation was founded in the year 1926, by the three Unions of Football Clubs of Athens, Piraeus and Macedonia-Thrace, is a Private legal entity, a non profit association, which, according to Civil Law, has its registered offices in Athens under the name of Hellenic Football Federation.
* H.F.F. abstains from any political or religious matters and prohibits any kind of political, religious, national or racial discrimination.
* The term of H.F.F. is unlimited.
* H.F.F. is the sole and exclusively qualified competent authority for representing the Greek football. It is a member of the International Football Federation (FIFA) and the European Football Federation (). Amongst its obligations is to accept the statutes, regulations, directives and decisions of FIFA and UEFA and to ensure that all of the above are also being accepted by everyone, in the field of Greek football.

H.F.F. has organised major football events with huge success. The most important "moments", as to the participating clubs, are:

The structure of H.F.F. is pyramid shaped. It is based on 2.000.000 football players and 5.773 football clubs, 3.700 from which are actively participating in official competitions of every kind, that take place throughout the country, covering all ages. The clubs come under the fifty three (53) Regional Unions of Football Clubs. The professional competitions are being organized by the Professional League (Greek League). H.F.F. is the supreme football authority, the one that all the clubs and professional teams come under and forms the top of the pyramid.

The General Assembly, convening once a year, is actually the H.F.F. parliament. It is the Assembly that -according to the Statutes- decides on everything about Greek Football. They can change the Statutes and the regulations of the Federation, enforce new ones, audit the financial review for the previous fiscal year and the budget for the year to come, vote (every four years) and monitor the Administration's work.

The operation of H.F.F. relies on the above mentioned divisions that function on the responsibility of their respective managers, as much as, the Committees of the Executive Board, which, according to the Statutes of the Federation, are the following:

The H.F.F. is responsible for doping control in all the Greek championships.