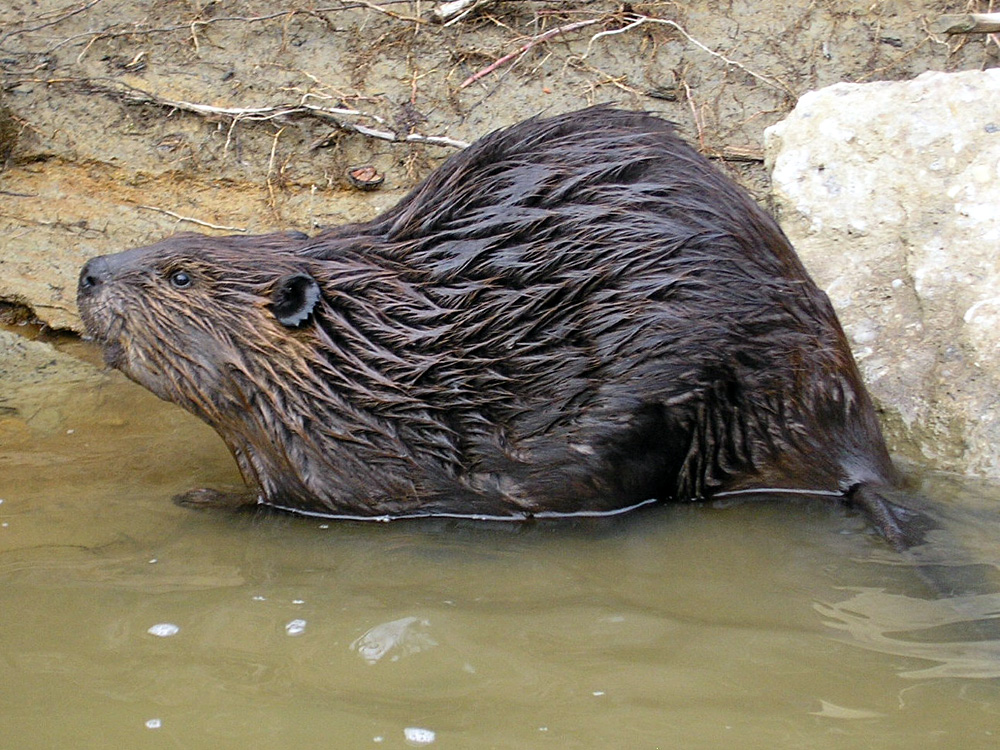 The American Beaver ("Castor canadensis") is a large semi-aquatic native to , much of the , and parts of northern . It was introduced in the most southern province of , , and it adapted to its temperate forests many years ago. Common names include North American Beaver, or simply Beaver in North America, as well as its subspecies names, the most common being the Canadian Beaver.

Its fur has a range of many different colors but is usually seen as dark brown. The beaver coat comprises two types of hair. The outer section is coarse and long and covers an inner layer which is much finer. It has a rounded head, a large flat paddle-shaped tail and webbed hind feet. The unwebbed front paws are smaller, with claws. This is the largest rodent found in and the second largest rodent in the world (the largest rodent being the n ).

Beavers are mainly active at night. They are excellent swimmers but are more vulnerable on land and tend to remain in the water as much as possible. They are able to remain submerged for up to 15 minutes. A scent gland near their genitals secretes an oily substance known as castoreum which is used to waterproof its fur. A thick layer of fat under its skin insulates the beaver from its cold water environment. The eyes are covered by a which allows the beaver to see underwater. Their nostrils and ears are sealed while submerged. The flat, scaly tail is used to signal danger and also serves as a source of fat storage.

They construct their homes, or "lodges," out of sticks, twigs, and mud in lakes or streams. These lodges may be surrounded by water, or touching land, including burrows dug into river banks. They are well known for building s across streams and constructing their lodge in the artificial pond which forms. The entrance to the lodge or burrow is located underwater. In the event of danger, a beaver slaps its tail on the water to warn other family members.

The dam is constructed using sections of trees, especially , , and . The inner bark, twigs, shoots and leaves of such trees are also an important part of the beaver's diet. The trees are cut down using their strong teeth. Their front paws are used for digging and carrying and placing materials. Some researchers have shown that the sound of running water dictates when and where a beaver builds its dam. Besides providing a safe home for the beaver, beaver ponds also provide habitat for waterfowl and other aquatic animals. Their dams help reduce soil and can help reduce flooding. During the summer, beavers eat grasses, s, water lilies and other aquatic plants.

Beavers usually mate for life. The young beaver "kits" typically remain with their parents for up to two years. The American Beaver is distinguished from its cousin, the , by its stronger teeth and greater reproductive capacity. [ [http://www.helsinki.fi/lehdet/uh/201a.htm Universitas Helsingiensis 2/01 ] ]

An emerging problem is the descendants of an introduced population in Tierra del Fuego, Argentina. The escapees from a farmed population of 25 animals has bloomed to an estimated 100,000; the drastically different ecosystem has led to incredible environmental damage, as the ponds created by the beavers have no ecological purpose (wetlands do not form there as they do in the beavers' native territory) and there are no native, large predators. They have also been found to cross saltwater to islands northward; a possible encroachment on the mainland has naturalists highly concerned.

Beaver meat is similar tasting to lean beef, but care must be taken to prevent contamination from the animal's strong castor (musk) gland. It is usually slow-cooked in a broth, and was a valuable food source to Native Americans.Fact|date=January 2008 In parts of North America, fried pastries called beaver tails may be found. Despite their name, they contain no beaver.

There are 25 subspecies of the American Beaver, but different subspecies have been reintroduced to areas with previously geographically isolated subspecies, following population decline or extirpation of the indigenous subspecies. This has led to very substantial mixing of the subspecies gene pools, and some subspecies may have disappeared entirely.

These animals are considered pests in some parts of their range because their dams can cause flooding in nearby areas. They are persistent in repairing any damage to the dam and the only effective measure is to remove them. In 1999 Washington, DC's annual was plagued by a family of beavers who lived in the . The offenders were caught and removed, but not before damaging 14 cherry trees, including some of the largest and oldest trees. [http://www.cnn.com/US/9904/11/chomping.cherry.tree/] [http://www.washingtonpost.com/wp-srv/local/daily/april99/chomp7.htm]

Non-lethal methods of containing beaver-related flooding have been developed. One such device has been utilized by both the Canadian and U.S. governments, called "Beaver Deceivers," or levelers, invented and pioneered by wildlife biologist, Skip Lisle.

These animals are often trapped for their fur. During the early 19th century, trapping eliminated this animal from most of its original range. The beaver furs were used to make clothing and s. Much of the early exploration of North America was driven by the quest for this animal's fur. Native peoples and early settlers also ate this animal's meat. The current beaver population has been estimated to be 10 to 15 million; there may have originally been ten times that many beavers in North America before the days of the .

In the 1940s, beavers were brought to the island of in southern , for commercial fur production. However, the project failed and the beavers were released into the wild. Having no natural predators in their new environment, they quickly spread throughout the island, and to other islands in the region, reaching a number of 100,000 individuals within just 50 years (when released into the wild there were only a few pairs). They are now considered a serious in the region, due to their massive destruction of forest trees, and efforts are being made for their eradication [ [http://edition.cnn.com/NATURE/9907/09/argentina.beaver/ CNN - Argentina eager to rid island of beavers - July 9, 1999 ] ] .

The beaver as symbol

One of the national symbols of Canada, the beaver is depicted on the Canadian five-cent piece and was on the first Canadian postage stamp, the Three Penny Beaver. It is also the state animal of and New York, and a common school emblem for schools, including the and the , as well as the mascot for . The beaver also appears in the coats of arms of the and the .

* [http://www.ecology.info/beaver-ecology.htm Ecology of the Beaver]
* [http://www.pch.gc.ca/progs/cpsc-ccsp/sc-cs/o1_e.cfm Canadian Heritage - the beaver as a national symbol]
* [http://purl.galileo.usg.edu/ugafax/QL737xR6xD84 The romance of the beaver;] being the history of the beaver in the western hemisphere, by A. Radclyffe Dugmore. Illustrated with photographs from life and drawings by the author. Publisher: Philadelphia, J.B. Lippincott company; London, W. Heinemann 1914 "(a searchable facsimile at the University of Georgia Libraries)"
*Gallant, D., C.H. Bérubé, E. Tremblay, & L. Vasseur (2004). An extensive study of the foraging ecology of beavers ("Castor canadensis") in relation to habitat quality. [http://www.colby.edu/academics_cs/courses/BI312/upload/ForagingBeaversHabitatQuality.pdf Canadian Journal of Zoology] 82:922–933.