Cultivars can be divided into apples which are cooked whole (or in large segments) in the oven and become soft and fluffy, often aromatic (e.g. Newton Wonder or Peasgood Nonesuch). Other varieties are processed, as in pies or sauce, etc., such as Bramley or Golden Noble. Bramley is by far the most popular cooking apple in the UK.

Apples can be cooked down into sauce, apple butter or fruit preserves, baked in an oven and served with custard, and made into pies or apple crumble. In the UK apples are commonly boiled and mashed and served as apple sauce with roast pork.

A baked apple is one that has been baked in an oven until it has become soft. The core is usually removed and often stuffed with other fruits, brown sugar, raisins, or cinnamon. 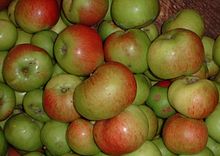 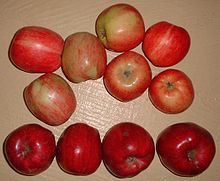