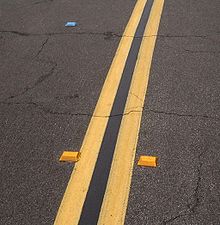 A raised pavement marker is a safety device used on roads. These devices are usually made with plastic, ceramic, or occasionally metal, and come in a variety of shapes and colors. Many varieties include a lens or sheeting that enhance their visibility by reflecting automotive headlights. Some other names for specific types of raised pavement markers include Botts' dots, delineators, cat's eyes, road studs, or road turtles. Sometimes they are simply referred to as reflectors.

In the United States, Canada, as well as Australia, these plastic devices commonly have two angled edges facing drivers and containing one or more corner reflector strips. In areas where snowplowing is frequent, conventional markers are placed in a shallow groove cut in the pavement, or specially designed markers are used which include a protective metal casting that is embedded in recesses in the pavement, allowing the marker to protrude slightly above the pavement surface for increased visibility, much like a cat's eye.[1] In areas with little snowfall, reflective raised pavement markers are applied directly to the road surface rather than being embedded into the surface.

The device's reflective surface enables the device to be clearly visible at long distances at night and in rainy weather. The devices come in multiple colors which vary in usage depending on local traffic marking standards.

Usage of color in Europe

In almost all European countries, such markers will include reflective lenses of some kind. Most appear white or gray during daylight; the colors discussed here are the color of light they reflect. Because of their inconspicuousness during the day, they are always used in conjunction with painted retro-reflective lines, they are never seen on their own.[2]

M9 motorway in Carlow, Ireland with cat's eyes on the road surface and retroreflectors on barriers

The exception to the above rules are:

Usage of color in North America 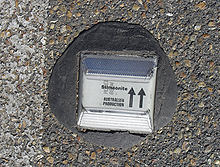 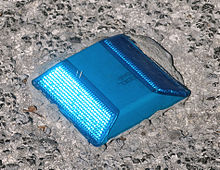 Colors can also be combined, with a different color facing each direction:

The current trend for lane markings is to intersperse retroreflective paint lines with reflectors as seen on the majority of American highways.

Usage of color in Australia 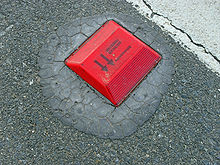 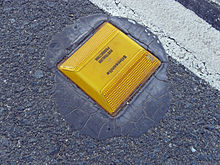 Cat's eyes were the earliest form of reflective pavement markers, and are in use in the United Kingdom and other parts of the world. They were invented in the United Kingdom in 1933 by Percy Shaw and patented in 1934 (UK patents 436,290 and 457,536), and the United States in 1939 (U.S. patent 2,146,359). On March 15, 1935, Shaw founded Reflecting Roadstuds Ltd, which became the first manufacturer of raised pavement markers.

The designs now used widely throughout the United States didn't appear until more than a decade later. They are based on the invention of engineer Sidney A. Heenan in the course of his employment with the Stimsonite Corporation in Niles, Illinois. Heenan filed an application for a patent on October 23, 1964. Patent No. 3,332,327 was subsequently granted on July 25, 1967.

Cat's eyes, in their original form, consist of two pairs of reflective glass spheres set into a white rubber dome, mounted in a cast iron housing. They are generally more durable than Botts' dots[citation needed] (they are snowplough safe) or other forms of markers and also come in a variety of colors. They have enjoyed widespread usage in the British Isles and elsewhere around the world. 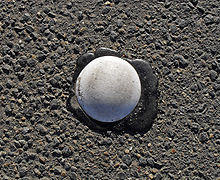 Nonreflective raised pavement markers (also known as Botts' dots) are usually round, are white or yellow, and are frequently used on highways and interstates in lieu of painted lines. They are glued to the road surface with an epoxy and as such are not suitable in areas where snow plowing is conducted. They are usually made out of plastic or ceramic materials.

A Toucan crossing with markers visible. In this case thermoplastic paint has been used.

In the UK, the area in which pedestrians should cross at pelican crossings is marked out by a series of markers. Occasionally these are painted as squares on the road but more often a metal stud is used. These are usually square and made from unpainted steel or aluminum.

Delineators are tall pylons (similar to traffic cones or bollards) mounted on the road surface, or along the edge of a road, and are used to channelize traffic. These are a form of raised pavement marker but unlike most such markers, delineators are not supposed to be hit except by out-of-control or drifting vehicles. Unlike their smaller cousins, delineators are tall enough to impact not only a vehicle's tires but the vehicle body itself. They usually contain one or more reflective strips. They can be round and open in the center or curved (45 degree sections) of plastic with a reflective strip. They are also used in low reflective markers in a "T" shape. They can also be used to indicate lane closures as in cases where the number of lanes is reduced.

The name delineator is also used for reflective devices attached to other objects which are technically not pavement markers.