Riaz Ahmed Gohar Shahi (Urdu: ریاض احمد گوہر شاہی; born 25 November 1941; disappeared or died 2001 or 2003)[1] is a spiritual leader, founder of the spiritual movements RAGS International (now known as Messiah Foundation International) and Anjuman Serfaroshan-e-Islam (ASI; انجمن سرفروشان ِاسلام).[2] He is the author of a number of Urdu books on spiritual topics, the most successful among these being Deen-e-Ilahi "The Religion of God" (2000), translated into English, Arabic, Thai, Persian, and Hindi by Messiah Foundation International.

RAGS International was renamed to Messiah Foundation International after Shahi's disappearance in 2001. MFI claims that Shahi is the Mehdi, Messiah, and Kalki Avatar.[3][4][5]

Shahi was born on 25 November 1941, in the village of Dhok Gohar Shah in the district of Rawalpindi of British India. He was a fifth generation descendant of the Sufi Baba Gohar Ali Shah. At the age of twenty, when he was the owner of F. Q. Steel Industries, Shahi began to search for spirituality, seeking out the saints and dervishes of the time. Eventually he became disillusioned in this search, and, disappointed in not receiving spiritual benevolence, he returned to work. Gohar Shahi then married and had three children.

Gohar Shahi left his work, family and parents and went to Shorkot, where he read the book Noor ul Huda (Light of Guidance), written by Sultan Bahu. He then went to Sehwan Sharif for self-mortification and peace of heart, and spent a period of three years in the mountains of Sehwan Sharif and the forest of Laal Bagh in self-purification.[year needed][6]

Shahi became popular as a Sufi preacher in Pakistan during the later 1970s. He formed RAGS International and Anjuman Serfaroshan-e-Islam in 1980.

The CEO of RAGS International is Younus AlGohar.

Shahi claimed to have met with Jesus Christ in 1997.

Several cases were filed against Gohar Shahi and his followers. Shahi was booked in 1997 on charges of allegedly murdering a woman who had come to him for spiritual treatment.[2]

He and many of his followers[7] have been convicted under Islamic blasphemy laws[8][9] by an antiterrorist court in Sindh.[10] After he fled to England, Shahi was convicted in absentia,[7][9] receiving sentences that totaled approximately 59 years.[8]

Shahi was reported to have "mysteriously" disappeared in 2001, in London. In February 2002, prior to any decision on appeals filed with the High Court of Sindh, Ardeshir Cowasjee claimed in an article he wrote for Dawn, the Pakistani newspaper, that unnamed people who identified themselves to him as office-bearers of the All-Faith Spiritual Movement told him that Gohar Shahi died abroad, but this report was unconfirmed.[8] After Shahi's disappearance, his followers largely split into two organizations after his disappearance, Messiah Foundation International and the Anjuman Serfaroshan-e-Islam.[citation needed] RAGS International was renamed to Messiah Foundation International shortly after Shahi's disappearance. Its current leader is Younus AlGohar.

Of the two factions of Shahi's followers, the Anjuman Serfaroshan-e-Islam asserts that Shahi died, and built a tomb for him at the Markazi Aastana in Kotri, where devotees perform pilgrimage. [8] The MFI, on the other hand, denies Shahi's death and claims that he has "merely disappeared", or that he is "serving a life sentence".[11][14]

Shahi's family, including his wife, five sons and a daughter, still resides in Kotri. 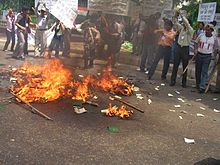 The teachings of Gohar Shahi have been a source of controversy. Some orthodox theological scholars condemn his teachings as blasphemy,[15] while others, such as Hisham Kabbani, have sat at his feet as well as praised him.[16]

Opposition to Gohar Shahi and his followers stemmed from claims made by Shahi and his followers that were strongly opposed by orthodox Islamic theologians in Pakistan and abroad.[8] Shahi was accused of claiming the status of prophet but Shahi denied such accusations.[2][8] His teachings have been condemned by Muslim religious leaders and the Pakistani government.[15]

Shahi also predicts that the world would end in they year 2026 due to a comet heading towards earth. He claims the comet will be the cause of "total destruction" though mentions that "in order to intimidate [mankind]...God plans destruction on a small scale".[19]

Many attempts were made on the lives of Shahi and his close follower, Younus AlGohar,[20] including a petrol bomb thrown into AlGohar's residence in Manchester[20] (where Shahi stayed when he toured the United Kingdom)[21] and an attack with a hand grenade during a discourse at his home in Kotri, Pakistan.[21] A bounty was put on his head in Pakistan.[21]

Shahi's books have been banned by the government of Pakistan,[15] and his followers are not allowed to meet in public.[22]

Gohar Shahi claimed to have met with Jesus in America.[23] Shahi's supporters claim that his face became prominent on the moon, sun, nebula star and the Black Stone in Mecca,[24] and that these appearances were signs from God that Gohar Shahi was the awaited Imam Mehdi, Messiah, and Kalki Avatar. The alleged images induced greater legal and religious opposition.[22] Shahi has also supported this claim, saying that God had revealed the images of Shahi on the Moon and various locations, for which Shahi himself was not responsible, and if questions should be raised, they should be raised to God.[25] Messiah Foundation International claims the alleged images to be signs from God, pointing to Shahi being the awaited Mehdi, and quote religious texts[26] and sayings from the likes of Nostradamus,[27] and Ja'far al-Sadiq to support it.

In 18 November 1997 (17 Rajab 1418), after appearing in court before Justice Rasheed A. Razvi of Sindh High Court Hyderabad Circuit, Shahi said the "only justification to be Hazrat Imam Mehdi was the mark on [one's] back which can only prove his existence."[2]

Of the groups following Shahi, Messiah Foundation International claims that Shahi is the awaited Mehdi, Messiah, and Kalki Avatar while Anjuman Serfaroshan-e-Islam does not. According to MFI's website, Shahi is the Awaited Messiah, but they deny that Shahi is another form of Jesus and claim that Jesus has also returned to support the Mehdi.

Gohar Shahi authored a number of books and treatises, including one based on Sufi poetry known as Taryāq-e-Qalb, roughly translating to the "'Cure of Hearts'". One of his most prominent books is Deen-e-Ilahi (The Religion of God). Works by Gohar Shahi include:

Messiah Foundation International considers Shahi to be the author of the "Goharian Philosophy of Divine Love", a set of principles upon which the organisation is founded.[29]

Shahi also authored a monthly magazine, Hatif-e-Mehdi, which was banned in Pakistan for allegedly containing material offensive to the religious feelings of Muslims there.[30]