The North Region of Brazil (Portuguese: Região Norte do Brasil) is the largest Region of Brazil, corresponding to 45.27% of the national territory. It is the least inhabited of the country, and contributes with a minor percentage in the national GDP and population. It is composed by the states of Acre, Amapá, Amazonas, Pará, Rondônia, Roraima and Tocantins.

Its demographic density is the lowest in Brazil considering all the regions of the country, with only 3.8 inhabitants per km2. Most of the population is centered in urban areas.

The Amazon represents over half of the planet's remaining rainforests and comprises the largest and most species-rich tract of tropical rainforest in the world. 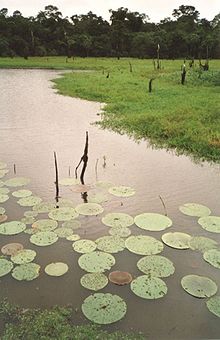 The diversity of plant species is the highest on earth with some experts estimating that one square kilometre may contain over 75,000 types of trees and 150,000 species of higher plants. One square kilometre of Amazon rainforest can contain about 90,790 tonnes of living plants.[5] This constitutes the largest collection of living plants and animal species in the world. One in five of all the birds in the world live in the rainforests of the Amazon. To date, an estimated 438,000 species of plants of economic and social interest have been registered in the region with many more remaining to be discovered or catalogued.[6] 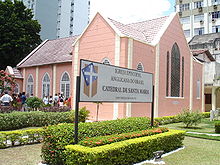 Belém is the 2nd most populous city of the North region.

The population of northern Brazil is largely made up of Caboclos, descendants of Indians and Portuguese. The north of Brazil has received and continues to receive large migration of people from South and Southeast of the country. In the 20th century, the North also received great migration from the Northeast, who were working in the rubber plantations of Amazonas and Acre.

Portuguese language is the official national language, and thus the primary language taught in schools. But English and Spanish are part of the official high school curriculum.

There are only a few highways in the North region. The most important ones are the Trans-Amazonian highway, running through Amazonas, Pará, Piauí, Maranhão, and the Rodovia Belém-Brasília, running through the Federal District, Goiás, Tocantins, Maranhão and Pará. Most of the transportation on the region is done by boat or airplane, mainly in the state of Amazonas. There are two major airports in the region: Belém International Airport, serving Belém, and Eduardo Gomes International Airport, serving Manaus.