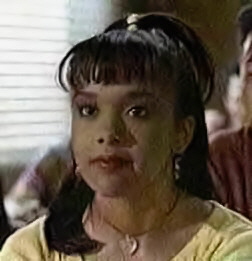 Aisha Campbell is a from the "" TV Show. She was portrayed by .

Spirited and full of energy, Aisha was always up to the challenge as a Power Ranger. Aisha's ancestor Miss Alicia is the first known female Power Ranger.

Aisha made her first appearance alongside friends, and fellow Stone Canyon High School students, Rocky DeSantos, and Adam Park, in the middle of Season 2 of "MMPR". When visiting Angel Grove Park, she and her friends attempt to rescue their teacher's runaway baby (strapped into its baby cart) before it plummets over a hillside. Aisha almosts saves the baby before intervenes a split second before, with the aid of and . The joint rescue attempt serves as the jumping off point for Aisha, Rocky and Adam's friendship with the Ranger teens. The Ranger teens attend (as spectators) the Team Ninja Finals event being held at the Angel Grove Youth Center. The new trio turns out to be Aisha, Rocky and Adam.

Aisha, Rocky and Adam would continue to aide the Rangers when the three Stone Canyon teens would find themselves embroiled in 's latest plot to destroy all humans. captures the three Stone Canyon teens in a cave, binds them in chains, and releases a large snake onto them; its bite would turn them evil and make them a part of Zedd's army. They attempt to escape, but are re-captured and only set free later by the Power Rangers. Though freed, the Stone Canyon teens are still covered by the snake. The Blue Ranger wrestles it off but it coils around his neck preventing him from breathing. Though Kimberly manages to kill the snake, the damage to Billy's neck still prevents him from breathing, requiring him to remove his helmet, revealing his identity to Aisha and her friends. Tommy and Kim follow Billy's lead and make their admissions.

Entrusting them with the identities of the Power Rangers, Zordon places Aisha and her friends under oath to protect this vital information. Aisha and her friends would continue to aide the Rangers again, most notably Aisha; Zedd's Beamcaster monster places everyone, including the Power Rangers, under his command, Aisha's technical experience from working at a radio station allows her to repair a device that cancels the monsters brainwashing signal.

When the other Rangers , and were selected to attend a Peace Conference in Switzerland, Rocky, Adam and Aisha took their places on the team. Aisha became the Yellow Power Ranger, entrusted with the Power Coin and the Griffin Thunderzord. Subsequently, the new members of the team will transfer to Angel Grove High and begin to regularly hang out with the other Ranger's. After the destruction of the and damaging of the Power Coins, Aisha received the Yellow Ninja Ranger powers of the bear from .

In Season 3 of "MMPR", after Kimberly learns that her mother was marrying her French Artist fiancee (and subsequently relocating to France), Aisha and her family allow Kimberly to live with them for the rest of the school year. Aisha's strong friendship with her fellow rangers allows Aisha to remain immune to the Hate Master's hate spell. She resists the spell that led to the corruption of her fellow team mates and forces the monster to retreat in order to recharge.

Aisha is a huge animal lover. This being the case, she decides to become a volunteer at a local Veterinarian Clinic where she provides care to a stray white cat Kimberly finds in the park. Kimberly is allowed to keep the cat, which eventually turns out to be , a friendly blonde teen girl from Australia who was transformed and turned evil by in an attempt to inconspicuously get to Kimberly's coin; a plot to remove the veteran from the team. After Kimberly's eventual departure, a plot by Zedd to retrieve the powerful Zeo Crystal sees the crystal broken down into sub-units, referred to as sub-crystals, and scattered throughout time.

Aisha appeared in this movie. Due to the alternate timeline of this movie, it is unknown if Aisha had control of the Saber-Toothed Tiger Dinozord or the Grffin Thunderzord, although she still has the Saber-Toothed Tiger Power Coin. It is also unknown if Trini was the Yellow Ranger before her. Aisha was depowered by Ivan Ooze and had to travel to Phaedos. There she gained the power of the ninjetti and the Bear Ninjazord.

After the Rangers are de-aged by a time reversal spell performed by Rita Repulsa's father, Master Vile, each young Ranger must go on a quest to retrieve a piece of the crystal. On Aisha's quest, she is sent to a village in Africa that is in a state of destruction after the surrounding wildlife had began to attack the villagers. Young Aisha meets a young girl named Tanya and manages to find her Zeo Subcrystal. However, rather than return to the team as the Yellow Ranger, Aisha stays in Africa, offering to use her veterinary knowledge to try and help cure the aggressive wildlife. Young Aisha sends young Tanya back to the Command Center, in the state that they were then in, with the Zeo Subcrystal in her place, aware that she would alter the course of her family's history by doing so. The next and last time Aisha would be heard from occurs in Power Rangers Zeo, when she sends a letter and the tiki Auric to Tanya, who is living with the current Pink Ranger, Aisha's friend Kat, much the same way Kimberly lived with her before.