Călin Constantin Anton Popescu-Tăriceanu (Romanian pronunciation: [kəˈlin konstanˈtin anˈton poˈpesku təriˈtʃe̯anu]) (born 14 January 1952) is a Romanian politician. He was the Prime Minister of Romania between 29 December 2004 and 22 December 2008. He is the former president of the National Liberal Party (PNL) and the vice-president of the European Liberal Democrat and Reform Party (ELDR), two positions he assumed in 2004.

Calin Popescu-Tăriceanu was born in Bucharest. His mother, Alexandrina Louise Lăzărescu, is of Greek ancestry[1]–her mother was fully Greek while her father was half-Romanian, half-Greek.[2] He has been married three times and has two children.[3] Popescu-Tăriceanu is a graduate of the Technical Constructions Institute in Bucharest and has a Master's Degree in Mathematics and Computer Science.

Between 1996 and 1997, he served as Minister of Industries and Commerce in Victor Ciorbea's government. Between 1996 and 2004 he was a member of the Chamber of Deputies of Romania, representing Bucharest. Between 2000 and 2004, he was vice president of the PNL group in Parliament, as well as vice president of the Budget, Finances and Insurance Committee in the Chamber of Deputies.[4] 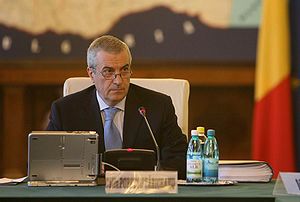 Following the victory of Traian Băsescu in the 2004 presidential election, Băsescu appointed Popescu-Tăriceanu as Prime Minister, in line with a pre-electoral agreement between the two parties of the Justice and Truth Alliance. The new government took office on 29 December; it was approved by Parliament by a vote of 265 for and 200 against.

On 7 July 2005, Popescu-Tăriceanu announced that he and his cabinet would resign in order to trigger early elections. The announcement of the resignation was prompted by the Constitutional Court's decision to block a set of laws designed to reform the judicial system. President Traian Băsescu had been pushing for early elections since his victory in the 2004 elections. On 19 July, Popescu-Tăriceanu reversed the decision and announced he would not resign, citing the severe floods that hit the country (for example the Comăneşti floods). Floods killed 66 people in Romania that year, leaving thousands homeless.[5] At that point, relations began to publicly sour between Popescu-Tăriceanu and President Băsescu, who refused to meet with the Prime Minister in the days following the announced reversal.

In the view of former President Emil Constantinescu, however, relations between Popescu-Tăriceanu and President Băsescu started to become strained following allegations of Băsescu's past membership in the Securitate (during Communist Romania).[citation needed]

In September 2005, a newspaper alleged that on 9 April 2004, Tăriceanu bought 10 million shares of the Rompetrol company based on insider information[citation needed], shares that were sold later that year after he became Prime Minister. Several other publicly known persons were cited to testify about their involvement in questionable transactions with Rompetrol shares, including the company's CEO, Dinu Patriciu.

On 5 April 2006 Basescu stated that he regrets naming Tariceanu Prime-Minister, and accused him of partnership with other groups.[6]

On 29 June 2006, Tăriceanu officially announced that the National Liberal Party supports the withdrawal of Romanian troops from international battle zones where they are deployed without a mandate from the United Nations, NATO, or the European Union. This mainly concerns the Romanian troops in Iraq (present there following the Iraq War). This position is strongly opposed by President Băsescu.[citation needed]

On 14 March 2007, Popescu-Tăriceanu postponed the elections for the European Parliament claiming that the political environment was too unstable due to discussions regarding President's impeachment, the subsequent referendum, and the fact that President Basescu asked for a referendum regarding uninominal elections.[citation needed] The media also pointed out that Popescu-Tăriceanu's National Liberal Party stood to perform poorly in the elections if they were held at the time.[citation needed] 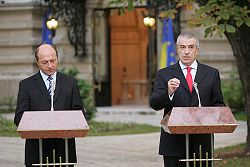 On 21 March 2007, he assumed ad interim the office of Minister of Foreign Affairs, 43 days after Ungureanu's resignation, because President Băsescu refused to accept the nomination of Adrian Cioroianu. On 5 April 2007, the Constitutional Court decided "The Romanian President's refusal to name a member of Government at the proposal of Prime Minister started a jurisdictional conflict of a constitutional nature.[...] The Romanian President has no right to veto, but he can ask the Prime Minister to renounce his proposal, if he observes that the proposed person does not meet the legal conditions required to be a member of Government".[7] The same day, Cioroianu assumed the position of Minister of Foreign Affairs.

Popescu-Tăriceanu's government survived a no-confidence vote on 3 October 2007, following a motion brought by the Social Democratic Party. Although 220 members of parliament voted in favor of the motion and only 152 voted against it, the motion fell short of the necessary 232 votes.[10]

Tăriceanu has been accused by President Băsescu of interfering with justice in Dinu Patriciu's benefit, because prosecutors detained Patriciu for longer than the 24 hours allowed by law.[11]

On 24 January 2006, Monica Macovei, then Minister of Justice, made public a meeting with Tăriceanu which took place 7 months before (in June 2005), and to which Tăriceanu invited Dinu Patriciu. Patriciu complained to Macovei about alleged procedural problems regarding his case. Macovei accused Tăriceanu of interfering with justice. On 20 February 2006 Tăriceanu declared on TVR1:" I recognise my fault. I didn't act correctly. But I didn't influence justice."(Romanian)"Îmi recunosc vina. Nu am procedat corect. Dar nu am influenţat justiţia"[12]

Elena Udrea recalled that, while she was Presidential Counsellor, she saw a note written by Tăriceanu. In a few days President Băsescu found the note and made it public, saying that "The Prime Minister suggested to me a partnership, but, unfortunately, with our oligarchies"(Romanian)"Domnul prim-ministru imi propunea un parteneriat, dar, din pacate, cu oligarhiile noastre". The note was about a complaint from Petromidia about the 27 May procedure problems:

Dear Traian,
1. I send you annexed a document released by Petromidia, regarding the ongoing investigations.
2. If you have the opportunity to speak at the Prosecuting Magistracy about the subject?[13]

In May 2007, Patriciu won a lawsuit against Romanian Intelligence Service(SRI), who illegally tapped his phones for two years. He received from SRI 50,000 RON as moral prejudice.[14]