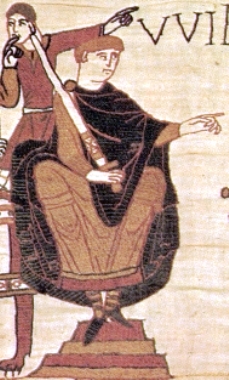 William is a popular proper name of old Germanic origin.

"William" is from the (although Norman French was Latin-based and the proper name is Germanic) and is a cognate from the German "Wilhelm", and of Germanic origin: "wil" = "will or desire"; "helm";"helmet, protection"; thus the name Wilhelm and the Old Norse name Vilhjálmr have the same roots. The name "Guildhelm" means "harnessed with a gilded helmet".

The English "William" is taken from the and was transmitted to England after the Norman Conquest in the 11th century, and soon became the most popular name in England, along with other Norman names such as (the English cognate was Hrēodbēorht [www.geocities.com/edgarbook/names/r/robert.html] ), , (the English cognate was [ [http://www.behindthename.com/name/roger Behind the Name: Meaning, Origin and History of the Name Roger ] ] ), and (all of Germanic origin, transmitted through the Normans' use of ). The name was so popular, in fact, that history records an event in Normandy in 1171 where held court for which included 110 knights named "William"-- the Williams had gathered in a room and refused to allow any one to eat with them, unless they were named William.

During the Middle Ages the word "cock" was used to describe a self-assured young man (taken after the image of a strutting self-assured rooster). As a result this nickname was applied to a number of names, including William which is where the name Wilcox comes from.

The name Wilkin is also of medieval origin taken from the shortened version of William (Will) with the suffix "kin" added. Kin means small or little, thus Wilkin means "Little William".

In the 16th century during the , s abandoned the usage of Catholic names such as William, instead using Biblical names.