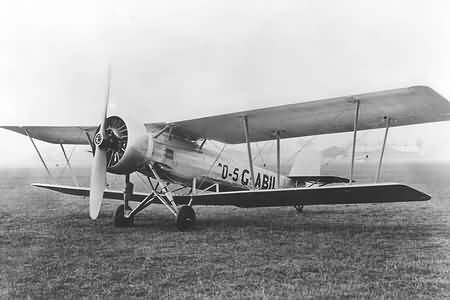 The Vickers Vespa was a British aircraft designed and built by in the 1920s. While not adopted by Britain's , small numbers were brought by the and , the latter of which used the type during the . One modified Vespa was used to set a world altitude record of 43,976 ft (13,407 m) in September 1932.

The Vespa was designed by Vickers as a private venture to meet the requirements of Specification 30/24 [The only other aircraft designed to meet this specification was the Short S.3b Chamois,] the first prototype, the Vespa I being flown in September 1925.

The prototype Vespa was modified as the Vespa VI for demonstration to the Central Chinese government, but was not purchased, so was returned to Britain. It was rebuilt as the Vespa VII, with a supercharged S engine for an attempt on the world altitude record, setting a record of 43,976 ft (13,407 m) on 1932.

Six Vespa IIIs were delivered to Bolivia in 1928, where they were mainly used as operational conversion aircraft, although they did see limited use in the . They remained in service until 1935. [ "Aeroflight World Air Forces - Bolivian Air Force". [http://www.aeroflight.co.uk/waf/americas/bolivia/Bolivia-af-CMA.htm] Access date: .]

The eight Irish Vespas remained in service for several years, operating from the base at Baldonnel, near , with the last being written off on . ["Irish Air Corps Aircraft 1922-1997". [http://www.iol.ie/~asire/aircorps.html] Access date: .]