A delta pylon carrying a 400kV power line towards Madrid.

A transmission tower (colloquially termed an electricity pylon in the United Kingdom and parts of Europe, an ironman in Australia, and a hydro tower in parts of Canada) is a tall structure, usually a steel lattice tower, used to support an overhead power line. They are used in high-voltage AC and DC systems, and come in a wide variety of shapes and sizes. Typical height ranges from 15 to 55 metres (49 to 180 ft),[1] although heights in excess of 300 metres (980 ft) exist. In addition to steel, other materials may be used, including concrete and wood.

"Transmission tower" is the name for the structure used in the industry in the United Kingdom, United States, and other English-speaking countries. The term "pylon" comes from the basic shape of the structure, an obelisk-like structure which tapers toward the top, and is mostly used in the United Kingdom and parts of Europe in everyday colloquial speech. This term is rarely, if ever, used in the United States, as the word "pylon" is commonly used for a multitude of other things, mostly for traffic cones. In Canada, the term "hydro tower" comes from the name of local hydroelectric power utility companies. 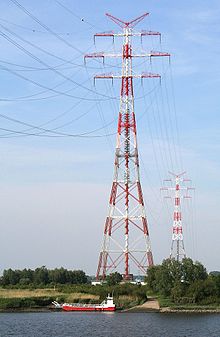 Three-phase electric power systems are used for high and extra-high voltage AC transmission lines (50 kV and above). The towers must be designed to carry three (or multiples of three) conductors. The towers are usually steel lattices or trusses (wooden structures are used in Canada, Germany, and Scandinavia in some cases) and the insulators are either glass or porcelain discs or composite insulators using silicone rubber or EPDM rubber material assembled in strings or long rods whose lengths are dependent on the line voltage and environmental conditions.

Typically, one or two ground wires are placed on top to intercept lightning and harmlessly divert it to ground.

Towers for high and extra-high voltage are usually designed to carry two or more electric circuits. If a line is constructed using towers designed to carry several circuits, it is not necessary to install all the circuits at the time of construction.

Some high voltage circuits are often erected on the same tower as 110 kV lines. Paralleling circuits of 380 kV, 220 kV and 110 kV-lines on the same towers is common. Sometimes, especially with 110 kV circuits, a parallel circuit carries traction lines for railway electrification. 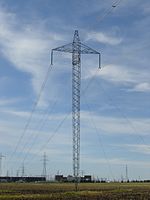 High-voltage direct current (HVDC) transmission lines are either monopolar or bipolar systems. With bipolar systems a conductor arrangement with one conductor on each side of the tower is used. On some schemes, the ground conductor is used as electrode line or ground return. In this case it had to be installed with insulators equipped with surge arrestors on the pylons in order to prevent electrochemical corrision of the pylons. For single-pole HVDC transmission with ground return, towers with only one conductor can be used. In many cases, however, the towers are designed for later conversion to a two-pole system. In these cases, often conductors on both sides of the tower are installed for mechanical reasons. Until the second pole is needed, it is either used as electrode line, or joined in parallel with the pole in use. In the latter case the line from the converter station to the earthing (grounding) electrode is built as underground cable, as overhead line on a separate right of way or by using the ground conductors.

Electrode line towers are used in some HVDC schemes to carry the power line from the converter station to the grounding electrode. They are similar to structures used for lines with voltages of 10–30kV, but normally carry only one or two conductors.

Towers for different types of currents

Usually all circuits of such lines have voltages of 50 kV and more. However, there are some lines of this type for lower voltages, for example when the masts of an overhead wire of a railway carry also circuits of the public three-phase AC grid.

However only two very short sections exist where a pylon carries as well AC as DC circuits: these are the pylons in the terminal of HVDC Volgograd-Donbass on Volga Hydroelectric Power Station and 2 pylons south of Stenkullen, which carry one circuit of HVDC Konti-Skan and the three-phase AC line Stenkullen-Holmbakullen. The overhead section of the electrode line of Pacific Intertie from Sylmar substation and the electrode line of Square Butte from Adolph substation are installed on AC towers.

Pylons carrying three-phase AC circuits of different frequencies may exist in areas, where grids operated with two frequencies come together, e.g. in Japan.

Before transmission towers are even erected, prototype towers are tested at tower testing stations. There are a variety of ways they can then be assembled and erected: 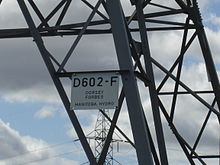 The International Civil Aviation Organization issues recommendations on markers for towers and the power lines suspended between them. Certain jurisdictions will make these recommendations mandatory, for example that certain power lines must have spherical markers placed at intervals, and that obstacle lights be placed on any sufficiently high towers.[3]

Electricity pylons often have an identification number or code placed on the pole in the form of a sign, an identification plate, painted numbers, or anything else the electric company chooses. These tags are usually marked with the names of the line (either the terminal points of the line or the internal designation of the power company) and the tower number. This makes identifying the location of a fault to the power company that owns the tower easier.

Transmission towers, much like other steel lattice towers including broadcasting or cellphone towers, are marked with signs which discourage public access due to the danger of the high voltage. Often this is accomplished with a sign warning of the high voltage; other times the entire access point to the transmission corridor is marked with a sign. Some countries require that lattice steel towers be equipped with a barbed wire barrier approximately 3 metres (9.8 ft) above ground in order to deter unauthorized climbing. Such barriers can often be found on towers close to roads or other areas with easy public access, even where there is not a legal requirement. In the United Kingdom, all such towers are fitted with barbed wire. 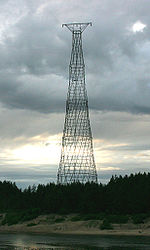 Hyperboloid pylon in the suburb of Nizhniy Novgorod, Russia.

Sometimes (in particular on steel lattice towers for the highest voltage levels) transmitting plants are installed, and antennas mounted on the top above or below the overhead ground wire. Usually these installations are for mobile phone services or the operating radio of the power supply firm, but occasionally also for other radio services, like directional radio. Thus transmitting antennas for low-power FM radio and television transmitters were already installed on pylons. On the Elbe Crossing 1 tower, there is a radar facility belonging to the Hamburg water and navigation office. 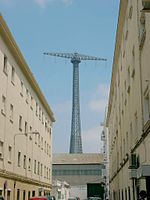 One of the Pylons of Cádiz, Spain

For crossing broad valleys, a large distance between the conductors must be maintained to avoid short-circuits caused by conductor cables colliding during storms. To achieve this, sometimes a separate mast or tower is used for each conductor. For crossing wide rivers and straits with flat coastlines, very tall towers must be built due to the necessity of a large height clearance for navigation. Such towers and the conductors they carry must be equipped with flight safety lamps and reflectors.

Two well-known wide river crossings are the Elbe Crossing 1 and Elbe Crossing 2. The latter has the tallest overhead line masts in Europe, at 227 metres (745 ft) tall. In Spain, the overhead line crossing pylons in the Spanish bay of Cádiz have a particularly interesting construction. The main crossing towers are 158 metres (518 ft) tall with one crossarm atop a frustum framework construction. The longest overhead line spans are the crossing of the Norwegian Sognefjord (4,597 metres (15,082 ft) between two masts) and the Ameralik span in Greenland (5,376 metres (17,638 ft)). In Germany, the overhead line of the EnBW AG crossing of the Eyachtal has the longest span in the country at 1,444 metres (4,738 ft).

In order to drop overhead lines into steep, deep valleys, inclined towers are occasionally used. These are utilized at the Hoover Dam, located in the United States, to descend the cliff walls of the Black Canyon of the Colorado. In Switzerland, a NOK pylon[vague] inclined around 20 degrees to the vertical is located near Sargans, St. Gallens. Highly sloping masts are used on two 380 kV pylons in Switzerland, the top 32 meters of one of them being bent by 18 degrees to the vertical.

Power station chimneys are sometimes equipped with crossbars for fixing conductors of the outgoing lines. Because of possible problems with corrosion by the flue gases, such constructions are very rare.

A new type of pylon will be used in the Netherlands starting in 2010. The pylons were designed as a minimalist structure by Dutch architects Zwarts and Jansma. The use of physical laws for the design made a reduction of the magnetic field possible. Also, the visual impact on the surrounding landscape is reduced.[4]

Where the conductors are straight, a tangent tower is used. Angle towers are used where a line must change direction.

Generally three conductors are required per AC 3-phase circuit, although single-phase and DC circuits are also carried on towers. Conductors may be arranged in one plane, or by use of several cross-arms may be arranged in a roughly symmetrical, triangulated pattern to balance the impedances of all three phases. If more than one circuit is required to be carried and the width of the line right-of-way does not permit multiple towers to be used, two or three circuits can be carried on the same tower using several levels of cross-arms. Often multiple circuits are the same voltage, but mixed voltages can be found on some structures. 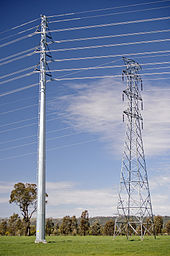 Steel tube pylon next to an older lattice pylon near Wagga Wagga, Australia

Poles made of tubular steel generally are assembled at the factory and placed on the right-of-way afterward. Because of its durability and ease of manufacturing and installation, many utilities in recent years prefer the use of monopolar steel or concrete towers over lattice steel for new power lines and tower replacements.[citation needed]

A lattice tower is usually assembled at the location where it is to be erected. This makes very tall towers possible (up to 100 metres—in special cases even higher, as in the Elbe crossing 1 and Elbe crossing 2). Assembly of lattice steel towers can be done using a crane. Lattice steel towers are generally made of angle-profiled steel beams (L- or T-beams). For very tall towers, trusses are often used.

Wood is a material which is limited in use in high-voltage transmission. Because of the limited height of available trees the maximum height of wooden pylons is limited (approximately 30 metres). Wood is rarely used for lattice framework; they are instead used to build multi-pole structures, such as H-frame and K-frame structures. The voltages they carry are also limited, such as in Germany, where wood structures only carry voltages up to approximately 30 kV. In coutries such as Canada or United States wooden towers carry voltages up to 345 kV; these can be less costly than steel structures and take advantage of the surge voltage insulating properties of wood.[6]

A reinforced concrete pole in Spain

Concrete pylons, which are not prefabricated, are also used for constructions taller than 60 metres. One example is a 66 metres tall pylon of a 380 kV powerline near Reuter West Power Plant in Berlin. Such pylons look like industrial chimneys. In China some pylons for lines crossing rivers were built of concrete. The tallest of these pylons belong to the Yangtze Powerline crossing at Nanjing with a height of 257 metres.

Where towers must be placed in inaccessible terrain by helicopters, the extra material cost of aluminum towers will be offset by lower installation cost. Design of aluminum lattice towers is similar to that for steel, but must take into account aluminum's lower Young's modulus.