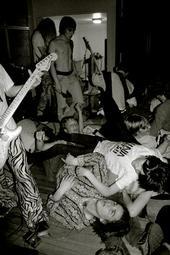 
The DHDFD's (rumored to mean "Don't Have Dogs For Dinner") are a four-piece rock band who formed during the summer of 2005 in the area of . They released a five track E.P, "Pastor of Muppets", in September 2006 which has subsequently sold out, going on to record a video for their single "Pompino's Magical Blast", receiving considerable rotation on .

The band was met with some criticism from the Auckland music scene for dismissing their original drummer and rhythm guitarist with detractors citing this as being a means of 'garnering attention and boosting their image.' Despite this, the band have remained a popular part of the community playing alongside such internationally recognized acts as , and local artists , but to name a few.

Their live shows have drawn both acclaim and criticism for their anarchic, chaotic performance - in mid 2008, Scott Brown's ascension of the lighting rig at Auckland venue Space saw the group barred for the foreseeable future.

The DHDFD's cite influences as diverse as , , , , and . Their energetic live shows have drawn comparisons to the likes of , and 2008 touring buddies The King Brothers.