The Federal Constitutional Court (in German: Bundesverfassungsgericht, or BVerfG) is a special court established by the Grundgesetz, the German basic law. Since its inception, the constitutional court has been located in the city of Karlsruhe, intentionally dislocated from the other federal institutions like the seat of the government in Berlin (earlier in Bonn), the head office of the BND (the German foreign intelligence agency) near Munich, or the seat of the Bundesbank (central bank) in Frankfurt.

The sole task of the court is judicial review. It may therefore declare public acts unconstitutional and thus render them ineffective. As such, it is similar to the Supreme Court of the United States. Yet the Court possesses a number of powers that the U.S. Supreme Court does not have (see below). It also differs from the U.S. and other supreme courts in that it is not an integral part of the regular judicial system (save for the areas of constitutional law and public international law) but installed as a separate judicial institution. Many other countries around the world possess separate constitutional courts similar to the Federal Constitutional Court.

Most importantly, the Court does not serve as a regular appellate court from lower courts or the Federal Supreme Courts as a sort of "superappellate court" on any violation of federal laws. Its jurisdiction is focused on constitutional issues, the integrity of the Grundgesetz and the immediate compliance of any governmental institution in any detail (article 1 subsection 3 of the Grundgesetz). Even constitutional amendments or changes passed by the Parliament are subject to its judicial review, since they have to be compatible with the most basic principles of the Grundgesetz (due to its Article 79 (III), the so called 'eternity clause').

The court's practice of enormous constitutional control frequency on the one hand, and the continuity in judicial restraint and political revision on the other hand, have created a unique defender of the Grundgesetz since World War II and given it a valuable role in Germany's modern democracy.

Article 20 subsection 3 of the Grundgesetz stipulates that all the three branches of the state-–legislative, executive and judicial–-are bound directly by the constitution. As a result, the court can rule acts of any branches unconstitutional, whether for formal violations (exceeding powers or violating procedures) or for material conflicts (when the civil rights prescribed in the Grundgesetz are not respected).

Germany's Constitutional Court has been quite active, striking down more than 600 laws because they were found unconstitutional (as of 2009).[2] 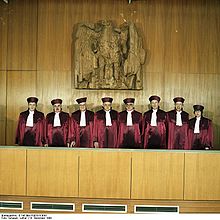 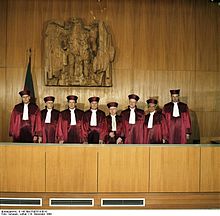 The Court consists of two Senates, each of which has eight members, headed by a senate’s chairman. The members of each Senate are allocated to three Chambers for hearings in Constitutional Complaint and Single Regulation Control cases. Each Chamber consists of three judges, so each Senate chairman is at the same time a member of two Chambers.

Decisions by a Senate require an absolute majority. In some cases a two thirds majority is required (§ 15 IV 1 BVerfGG). Decisions by a Chamber need to be unanimous. A Chamber is not authorized to overrule a standing precedent of the Senate to which it belongs; such issues need to be submitted to the Senate as a whole. Similarly, a Senate may not overrule a standing precedent of the other Senate; such issues will be submitted to a plenary meeting of all 16 judges (the "Plenum").

Unlike all other German courts, the court often publishes the vote count on its decisions (though only the final tally, not every judge's personal vote) and even allows its members to issue a dissenting opinion. This possibility, introduced only in 1971, is a remarkable deviation from German judicial tradition.

The Court's judges are elected by the Bundestag and the Bundesrat. According to the Basic Law, each of these bodies selects four members of each Senate, while the authority to select the Court's President alternates between them. The selection of a judge requires a two-thirds majority.

The Bundestag has delegated this task to a special body ("Richterwahlausschuss", judges election board), consisting of a small number of Bundestag members. This procedure has caused some constitutional concern and is considered to be unconstitutional by many scholars. However, it has never been challenged in a court.

The judges are elected for a 12-year term, but they must retire upon reaching the age of 68. A judge must be at least 40 years old and must be a well-trained jurist. Three out of eight members of each Senate must have served as a judge of a Federal Supreme Court. Of the other five members of each Senate, most judges previously served as an academic jurist at a university, as a public servant or as a lawyer. After ending their term, most judges withdraw themselves from public life. However, there are some prominent exceptions, most notably Roman Herzog, who was elected Federal President in 1994, shortly before the end of his term as President of the Court.

Presidents of the Court