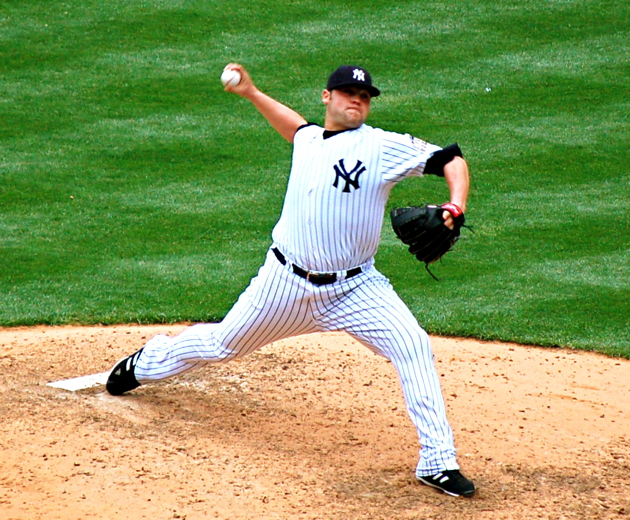 Chamberlain grew up in . Chamberlain's parents, Harlan Chamberlain and Jackie Standley, were never married and split up when Joba was 18 months old. Some sources say that Harlan obtained full custody of Joba when Joba was 3 years old,

Chamberlain's father was born on a reservation for the Winnebago American Indian Tribe, but had to leave to be treated for .

When Joba (then Justin) was a little boy, his two-year-old cousin was unable to pronounce her brother (Joba's other cousin) Joshua's name correctly, pronouncing it as Joba instead. Harlan Chamberlain heard this and liked the nickname, so he began referring to Justin (instead of cousin Joshua) as Joba. Harlan said the name was "dynamic." Joba agreed, and eventually had his name legally changed.

Joba served as a ball boy and bat boy for 's state championship baseball team, and eventually graduated from Northeast. He did not jump straight to college; to help pay the bills, Joba briefly worked for the city of Lincoln's maintenance department.

He played American Legion baseball over the summer of 2004 for Coach Steve Eckman, going 4-4 with a 1.36 ERA, as he struck out 137 hitters and walked only 21 en route to all-state honors. He recorded 21 strikeouts over 12 shutout innings in a matchup against future fellow Nebraska star Johnny Dorn’s team, a 15-inning game won by Grand Island, 1-0. He also hit .505 with 11 homers, 11 doubles and 37 RBIs as a two-way performer. At Lincoln Northeast High School for coaches Bill Fagler and Doug Kaltenberger he garnered second-team Super State honors from the Lincoln Journal Star, going 3-2 with a 3.35 ERA, as he struck out 29 in 31.1 innings as a senior.

Chamberlain started his college career playing for the Lopers under coach Damon Day, leading the team in ERA (5.23), opponents (.250), s (49), and (4) in just 8 starts as a freshman, before transferring to the . He helped the Cornhuskers reach the and helped lead Nebraska to their first ever College World Series win, going 10–2 with a 2.81 ERA for the year; his by|2005 stats included 5 double-digit strikeout games. limited his by|2006 season but he still pitched in 14 games, posting a 6-5 record, a 3.93 ERA and 102 strikeouts in 89.1 innings.

Chamberlain was drafted 41st overall by the New York Yankees in the ; the Yankees received that draft pick as compensation for , who signed with the . Chamberlain did not pitch in the organized minors during the 2006 season, but dominated the winter league in Hawaii, posting a 2.63 ERA for the .

He spent the first part of his 2007 season on the Single-A Advanced in the . He went 4–0 with a 2.03 ERA in 7 games, and had 51 strikeouts and 11 walks. He was then promoted to the Double-A in the Eastern League, where he was 4–2 in 7 games with a 3.43 ERA and 64 strikeouts. He was named to the U.S. Team in the 2007 at . Chamberlain pitched the third inning, striking out one, walking one, and allowing a hit and an . On , 2007, Chamberlain was promoted to Triple-A Scranton/Wilkes-Barre, and made his first start the next day, striking out 10 in 5 innings and earning his first Triple-A victory. While the Yankees still saw him as a starter in the future, the team announced on , 2007, that Chamberlain would be moved to the Scranton-Wilkes Barre bullpen, and he made his first appearance the next day, striking out the side in 1 inning pitched and hitting 100 on the radar gun three times. On , Joba went back to Trenton to make a relief appearance, striking out 2 batters in a 1-2-3 8th inning. He then came back to Scranton, pitching 2 innings and striking out 5 batters.

On , mlby|2007, the Yankees purchased Chamberlain's contract, elevating him to the major leagues for the first time in his career. To make room on their roster, the Yankees designated for assignment, and sent down (coinciding with the activation of ) [ [http://www.omaha.com/index.php?u_page=1200&u_sid=10101017 Omaha.com Sports Section ] ] [ [http://newyork.yankees.mlb.com/news/article.jsp?ymd=20070807&content_id=2135193&vkey=news_nyy&fext=.jsp&c_id=nyy The Official Site of The New York Yankees: News: Notes: Yanks call up Chamberlain ] ] In his debut, a Yankees victory over the , Chamberlain struck out the first batter he faced and went on to pitch two scoreless innings, striking out two. The television and stadium radar guns clocked his fastest pitch at 100 and 99 miles per hour, respectively, with his consistently registering at 87.

Chamberlain's usage in games was initially restricted by what were referred to as "Joba Rules," which prevented him from pitching on consecutive days and gave him an additional day of rest for each inning pitched in an outing.

On , 2007, Chamberlain threw two pitches over the head of Boston's . Chamberlain was subsequently ejected for the first time in his baseball career. The next day, he was suspended for two games and fined $1,000 for the incident.

Chamberlain had an extraordinary experience when he was "bugged" in game 2 of the 2007 ALDS against the . The game took place at (in ) on . With the Yankees leading 1-0, Chamberlain was pitching in the bottom of the eighth when a host of small insects swarmed the field. [ [http://newyork.yankees.mlb.com/news/article.jsp?ymd=20071005&content_id=2252518&vkey=news_nyy&fext=.jsp&c_id=nyy The Official Site of The New York Yankees: News: Insects a nuisance at ALDS ] ] He was repeatedly sprayed down with insecticide, which had no apparent deterrent effect on the midges. Chamberlain then threw a , permitting to advance from first to . After a sacrifice bunt, Sizemore moved up to and, after another wild pitch by Chamberlain, Sizemore scored the tying run. The Indians went on to win the game 2–1.

On , announced that Chamberlain would begin mlby|2008 as a starting pitcher, but will limit his innings. [ [http://newyork.yankees.mlb.com/news/article.jsp?ymd=20071013&content_id=2264149&vkey=news_nyy&fext=.jsp&c_id=nyy The Official Site of The New York Yankees: News: Chamberlain to return to familiar role ] ]

Chamberlain was granted a leave of absence on , 2008, when he received news that his father, Harlan, was in the hospital after collapsing at his home in . [ [http://newyork.yankees.mlb.com/news/article.jsp?ymd=20080414&content_id=2526824&vkey=news_nyy&fext=.jsp&c_id=nyy The Official Site of The New York Yankees: News: Joba leaves Yanks to be with father ] ] At the time of his leave, Joba had a record of 1–0, with a 0.00 ERA and six strikeouts, and has 3 holds in 4 games and 5 1/3 innings pitched.Chamberlain returned from the in time for the 2nd game against the on , 2008. On , Hank Steinbrenner announced that he wanted Chamberlain to be moved into the rotation. [ [http://yankees.lhblogs.com/2008/04/19/joba-to-return-tonight/ Joba to return tonight] ]

On , Chamberlain gave up a three run to to give up the lead to the Indians in the 8th. This was the first time he had given up a run at in over 15 innings in the regular season.

On , Chamberlain threw two scoreless innings and 35 pitches in an 8-0 victory against the Orioles. After the game, Girardi announced that this was the beginning of a process to transition Chamberlain into the Yankee's starting rotation, and that he will be a member of the starting rotation at some point during the 2008 season. On , Chamberlain made his first MLB start against and the Toronto Blue Jays and lasted only 2 1/3 innings while allowing 2 runs, a hit and 4 walks. One , Chamberlain earned his first career win as a starter, throwing 6 2/3 scoreless innings against the , en route to a 10-0 Yankees victory.

On , Chamberlain threw 7 innings (the longest single outing of his major-league career) against the allowing only 3 hits and striking out 9. The Yankees won the game 1-0.

On , Chamberlain injured his shoulder in a game against the Texas Rangers and was only expected to miss one start, [http://www.nj.com/yankees/index.ssf/2008/08/yankees_joba_chamberlain_to_mi.html] but he was placed on the 15-day two days later after visiting orthopedic surgeon James Andrews, with rotator cuff tendinitis. [cite web |url= http://sports.espn.go.com/mlb/news/story?id=3522585|title= Chamberlain placed on DL; Kennedy to start vs. Angels|accessdate=2008-08-06 |work= |publisher= ESPN|date= 2008-08-06] Chamberlain said that he expected to return to the rotation before the end of the month [Citation |last= |first= |title=Joba expects to return this month |url=http://msn.foxsports.com/mlb/story/8417044?MSNHPHMA |publisher= |date=2008-08-08 |accessdate=2008-08-08] , but he was sidelined until , when he returned in a game against the pitching 1 1/3 innings of scoreless relief.

When Chamberlain takes the mound, he begins with a private prayer ritual which he began doing in Little League. The scoreboard staff plays 's "Shout at the Devil" whenever Chamberlain enters a game.

When pitching out of the bullpen, his fastball is known to sit in the upper 90's while occasionally topping 101mph with tailing action. His slider rates over 70 on the 20–80 scouting scale and has caused batters to swing and miss 75% of the time.

In 2007, Chamberlain was featured on the cover of an issue of ESPN the Magazine, being named as being "Next," or being the most likely young sports player to become a star.