"This article is about the Philippine municipality. For the State of Louisiana, see " Infobox Settlement
official_name = Municipality of Luisiana
other_name =
native_name = "Munucipalidad ng Luisiana"
nickname = "Little Baguio of Laguna"
motto = 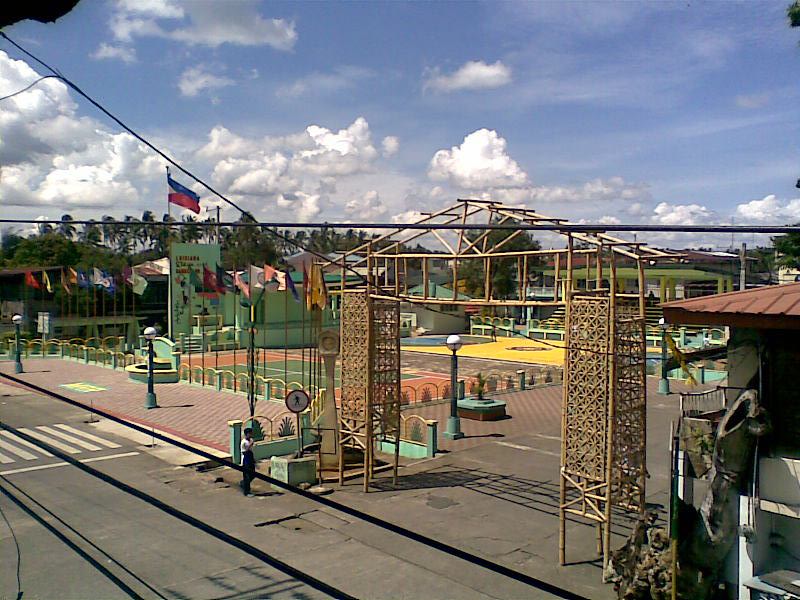 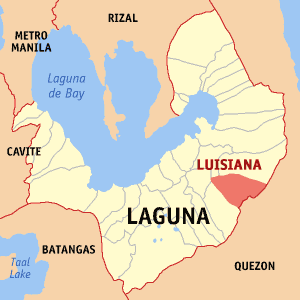 Luisiana occupies 6,379 hectares in a plateau 1,400 feet atop Sierra Madre mountain bounded by the towns of Majayjay in the west, Cavinti, Laguna in the north, Sampaloc and Mauban, Quezon in the east, and Lucban, Quezon in the south.

Luisiana is politically subdivided into 23 s.

Nasunog de Majayjay later became the town of Luisiana. It was only on , that ecclesiastical independence was granted to Nasunog by the Governor-General (the Marques de Novaliches) with the corresponding approval from the Archbishop of Manila, having Don Marcos Bartolome as its first interim parish priest. Because of the role of Don Luis Bernardo and his wife Doña Ana, the town was named "Luis y Ana", later changed to "Luisiana".

In 1948, Visita de Luisiana gained civil independence from Majayjay, but still without absolute independence for it remained under the spiritual jurisdiction of Majayjay.

In 1903, the towns of and Luisiana were combined, Pedro Villanueva of Cavinti was elected mayor and it was during his term that the Aglipay Church was founded in April, 1904. The Romana family funded the construction of a couple of Protestant churches. However, on , under the leadership of Don Blas Oracion, through the Civil Commission, Cavinti and Luisiana became independent towns.

Luisiana is basically an agricultural town. At the poblacion, there are only a few commercial establishments which cater to the basic services of the people. Most of them still go to Sta. Cruz to do their shopping or marketing and to avail themselves of other services not available in their town.

How to get there

Going to Luisiana by private transportation from Manila, you will pass by the South Superhighway and enter the province via the Calamba exit. Another way is through the Manila East road – Pagsanjan route or coming from quezon, the Lucban route.

Luisiana is also accessible by public transportation taking the same routes as mentioned above. However, whichever route you take, a trip to Luisiana will still be long since it is one of the inner towns in Laguna.

From Manila via Calamba, a bus will take you to Sta. Cruz, Laguna. In Sta. Cruz, going to Luisiana can be found at the jeepney terminal. Just ask a tricycle driver to take you to the terminal of going to Luisiana. Via Sta. Cruz, you will pass by the town of Pagsanjan before reaching Luisiana. You will easily know it when you have reached the town because the roads become zigzagged with lots of sharp twists and turns. This is one of the reasons why Luisiana is called the "little Baguio of Laguna."

At the center of the town, some of the sites are the Catholic Church, the monument of Don Luis Bernardo (town’s founder) and a monument of Dr. Jose P. Rizal.

But one interesting site in town is the "guard dogs" at the stairs in front of the municipal building. Instead of lions which are common sites or designs in stairs of other buildings, the municipal building of Luisiana has two dogs, which look like Dalmatians, one in each side of the building. However, no one can tell why they are there or what is the story behind the presence of the dogs in the building. Some of them believe that the dogs might have been a part of the town’s history which is yet to be discovered.

Aside from the man-made attractions, Luisiana is also blessed with natural attractions like falls and caves. If you are a water-lover, go check out some of the falls in the town like the Bumbongan, Malaog, Maapon, Limbun-limbon, Aliw, Lagaslas and Botocan-Tiklingan. While if you are more of the adventurous type, see the caves of Simbahang Bato and Butas Kabag. Although most of these attractions are not yet fully developed commercially, they are open for the public to see in their natural state.

Town feast is celebrated on October 9 for the feast of Our Lady of the Holy Rosary. Another celebration in town is held every 3rd of April, which is in commemoration of the town’s establishment as a separate entity from Majayjay. Luisiana also celebrates the Pandan Festival during this month and also the annual Miss Luisiana beauty pageant to select representative for Miss Laguna beauty pageant.

Sources of income of the people of Luisiana are mainly focused on agriculture such as copra, pandan, palay, bamboo and bunliw, with light industry base and service-sector economy. Piggery and poultry farming are also an additional income.

The current mayor promised that he will turn the town into a before his term ends on 2010.

On November 2008, Luisiana will host the Miss Laguna beauty pageant after winning the bid against Pila, Sta. Rosa and Nagcarlan. This is the second time that the town will host the pageant. The last time was in November 1997.