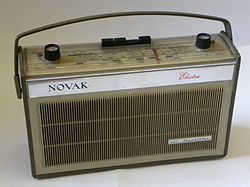 Novák, Novak or Nowak is a surname in a number of Slavic languages, and one of the most popular surnames in many Slavic countries, namely the Czech Republic, Croatia, Serbia, Slovakia, Slovenia,[2] Poland and Russia.

The name is derived from the Slavic word for "new" (e.g. Czech: nový), meaning something similar to "new man", "newcomer" or "stranger" in English. The name was often given to someone who came to a new city, or a convert to Christianity.

It is usually spelled:

It is pronounced almost the same way: the main difference is that in Slovene, the stress is usually on the last syllable, while in all other cases it is on the first one.

Many Americans of the surname Nowak have had it Anglicized to Novak.

In the Austrian capital of Vienna, where large Czech communities settled down at the end of 19th century, Novák was Germanized to Nowak because in German the "w" is pronounced as a "v".

There are two noble Nowak lines of Polish origin:

In Poland, it is spelled Nowak. It is the most common surname and 203,506 people carry it. The archaic feminine version of the Polish version is Nowakowa and its plural Nowakowie. In that country, Nowakowski, Nowacki, and Nowakiewicz developed as well.

"Nowak" as a surname in Voivodeships (administrative units in Poland):

In Croatia, Novak is the fifth most common surname (11,396 people).

In Serbia and Montenegro, there are people that have the first name Novak. Novaković and Novakov also developed in Serbia.

Novák is the most common surname in the Czech republic.

Novak is the most common surname in Slovenia, too, with more than 11,000 sharing it. There are however significant variations between regions: it's very common in central Slovenia (in the regions around Ljubljana and Celje), as well as in parts of southern Slovenia and eastern Slovenia (Lower Carniola, Prekmurje). It's much less common in northern and western Slovenia; in the Goriška region on the border with Italy, it is quite rare. The rank of the surname Novak in the Slovenian statistical regions: