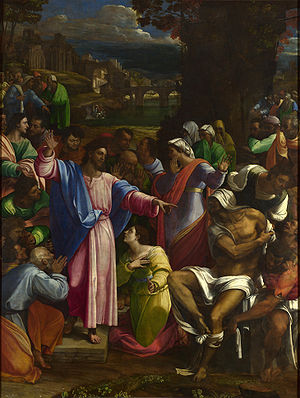 Sebastiano del Piombo (c. 1485 – June 21, 1547), byname of Sebastiano Luciani, was an Italian Renaissance-Mannerist painter of the early 16th century famous for his combination of the colors of the Venetian school and the monumental forms of the Roman school.

Sebastiano del Piombo belongs to the painting school of his native city, Venice, but was active for a large portion of his career in Rome. At first a musician, chiefly a soloist on the lute, he was in great request among the Venetian nobility. He soon showed a turn for painting, and became a pupil of Giovanni Bellini and afterwards of Giorgione, whose influence is apparent in his works. Some of Sebastiano's works were indeed confused with Giorgione's, i.e. the Salomè of 1510.

His first painting of note was done for the church of San Giovanni Crisostomo, Venice, and is so closely modeled on the style of Giorgione that in its author's time it often passed for the work of that master. It represents Saint John Chrysostom reading aloud at a desk, a grand Magdalene in front, and two other female and three male saints. 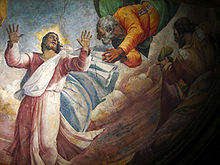 Detail of fresco in San Pietro in Montorio.

Towards 1511-1512 del Piombo aided Baldassarre Peruzzi in mythologic themes for lunettes in the Sala di Galatea in the villa now-called the Farnesina. There he would have worked alongside Raphael, and executed some mythology-inspired frescoes.

According to Vasari, Michelangelo befriended Sebastiano and offered pictorial designs for him to develop in paint. Four pictures for which this is claimed are the Pietà in the church of the Conventuali, Viterbo; the Transfiguration and the Flagellation in the Borgherini Chapel of the church of San Pietro in Montorio, Rome; and, most celebrated of all, the Raising of Lazarus, now in the National Gallery, London[1]. This grand work - more remarkable for general strength of pictorial perception than for qualities of detailed intellectual or emotional expression - is more than 3.5 by 2.5 meters, with the principal life-size figures transferred from wood to canvas in 1771. It was painted in 1517-1519 for Giulio de Medici, for the bishop of Narbonne, afterwards Pope Clement VII; and it remained in Narbonne cathedral until purchased by the duke of Orleans early in the eighteenth century, coming to England with the Orleans Collection in 1792. It has been generally admitted that the design of Michelangelo appears in the figure of Lazarus and of those who are busied about him (two sketches of the Lazarus regarded as Michelangelo's handwork are now in the British Museum [2]; but whether he actually touched the panel, as has often been said, appears more than doubtful, as he left Rome about the time when the picture was commenced. Raphael's Transfiguration was painted for the same patron and the same destination. The two works were exhibited together, and some admirers did not scruple to give the preference to Sebastiano.

His Flagellation of Christ, though ordinarily termed a fresco, is, according to Vasari, painted in oil upon the wall. This was a method first practiced by Domenico Veneziano, and afterwards by other artists; but Sebastiano alone succeeded in preventing the blackening of the colours. The design for the figure of Christ in this picture is supposed by many to have been supplied by Michelangelo. Sebastiano, always a tardy worker, was occupied about six years upon this work, along with its companion the Transfiguration, and the allied figures of saints.

Elevation to office of Piombo 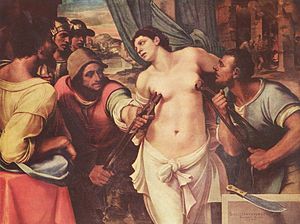 After the elevation of Giulio de' Medici to the pontificate, the office of the piombo (or leaden seal) that is, the office of sealer of briefs of the apostolic chamber became vacant; two painters competed for it, Sebastiano Luciani, hitherto a comparatively poor man, and Giovanni da Udine. Sebastiano, assuming the habit of a friar, secured the very lucrative appointment with the proviso that he should pay out of his emoluments 300 scudi per annum to Giovanni. The name "del Piombo" came from this office.[1] If he had heretofore been slow in paintings he became now supine in a marked degree.

One of the few subject-pictures which he executed after taking office was Christ carrying the Cross for the patriarch of Aquileia, also a Madonna with the body of Christ. The former painting is done on stone, a method invented by Sebastiano himself. He likewise painted at times on slate-as in the instance of Christ on the Cross, now in the Berlin gallery, where the slate constitutes the background. In the same method, and also in the same gallery, is the Dead Christ supported by Joseph of Arimathea, with a weeping Magdalene colossal half-length figures. 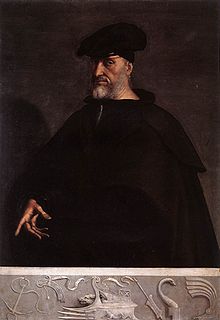 Late in life Sebastiano had a serious disagreement with Michelangelo with reference to the Florentine's great picture of the Last Judgment. Sebastiano encouraged the pope to insist that this picture should be executed in oil. Michelangelo, determined from the first upon nothing but fresco, tartly replied to his holiness that oil was only fit for women and for sluggards like Friar Sebastian; and the coolness between the two painters lasted almost up to the friar's death. This event, consequent upon a violent fever acting rapidly upon a very sanguine temperament, took place in Rome in 1547. Sebastiano directed that his burial, in the church of Santa Maria del Popolo, should be conducted without ceremony of priests, friars or lights, and that the cost thus saved should go to the poor.

Numerous pupils sought training from Sebastiano del Piombo; but, owing to his dilatory and self-indulgent habits, few adapted his style with the exception of Tommaso Laureti. Sebastiano, conscious of his deficiency in the higher sphere of invention, made himself especially celebrated as a portrait painter: the likeness of Andrea Doria, in the Doria Palace, Rome, is one of the most renowned. In the National Gallery, London, are two fine specimens; one canvas represents the friar himself, along with Cardinal Ippolito de' Medici; the other, a portrait of a lady in the character of St Agatha, used to be identified with one of Sebastiano's prime works, the likeness of Julia Gonzaga (painted for her lover, the aforenamed cardinal), but this assumption is now discredited. Other portraits include those of Marcantonio Colonna, Vittoria Colonna, Ferdinand marquis of Pescara, Popes Adrian VI, Clement VII and Paul III, Sanmicheli, Anton Francesco degli Albizzi and Pietro Aretino. One likeness of the last-named sitter is in Arezzo and another in the Berlin gallery. 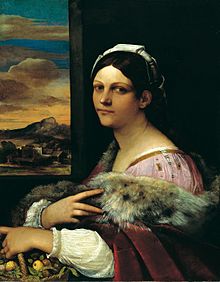