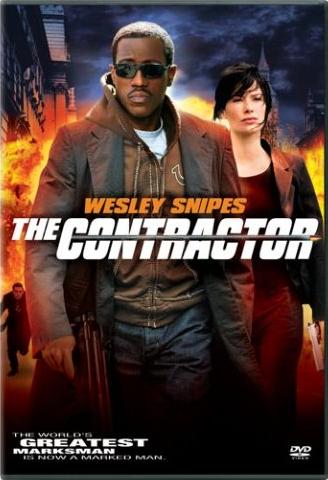 "The Contractor" is a direct-to-DVD action movie starring and , and directed by in in and the .

:*Tagline: The world's greatest marksman is now a marked man...

A retired -agent named James Dial () is living his life in seclusion on his ranch in when he is offered the chance to redeem himself by his former employer, Jeremy Collins ().

A few years ago, Dial was seconds away from taking down notorious terrorist cell leader Ali Mahmud Jahar () when a distraction allowed Jahar to escape, marking the mission as a failure.

Now, Collins wants Dial to eliminate Jahar, who has been captured and is now in the custody of the police in , .

Provided with a safe house, passports, and an assistant named Terry Mitchell (), Dial is off to London to finish what he started years ago.

Disguised as a , Dial gets in position in a church's bell tower across the street from the building that Jahar is being brought into.

When Jahar is brought out of his transport truck, his head is covered by a jacket, leaving Dial without a clean shot.

Not wanting to fail again, Dial patiently waits for his opportunity.

But when Jahar is taken upstairs, Dial attaches a special sight to his rifle so he can see through the window, and he fatally shoots Jahar in the back of the head.

Because of a delay caused by a pair of cops, Winchell is late bringing the getaway car, and that brings attention to them fleeing the scene.

After numerous attempts to stop the car, the police open fire on them, killing Mitchell.

The car, now out of control, comes to crashing stop, injuring Dial. Bleeding profusely, Dial makes his way to the safe house, where he meets curious 12-year-old neighbor Emily Day (), who lives with her grandmother ().

Emily helps Dial stop the bleeding. Even though Jahar was eliminated, the mission was a failure to Collins because Dial was observed fleeing the scene on a .

In the , Collins is being investigated for running a CIA Hit Squad, and if word gets back about Dial and the death of Jahar, Collins will be exposed.

Stopping at nothing to keep his name clean, Collins frames Dial for the murder of Chief Inspector Andrew Windsor ().

Now pursued by Collins and the British police, Dial must do whatever it takes to prove his innocence, knowing that Police Inspector Annette Ballard (), Windsor's vengeful daughter, is after him as well.

While Dial is being pursued by Collins and his rogue hit squad, Dial saves the life of Inspector Ballard who found herself in Collins' gunsights. Dial having earned Ballards trust, is watched by Ballard as Dial bids farewell to young Emily who is responsible for Dial's survival.

* was scheduled to appear in this movie but dropped out due to scheduling conflicts with (2007).