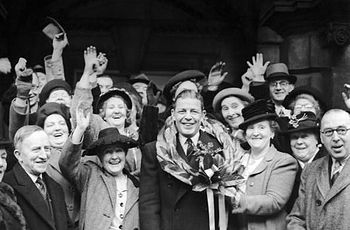 Maynard Sinclair, centre with garland, upon winning his constituency in the NI general election (14 February 1949)

Major The Rt Hon. John Maynard Sinclair (4 August 1896 – 31 January 1953) was a unionist politician in Northern Ireland. Born in Belfast, in 1896, son of John Sinclair DL and Alice Montgomery, he was educated at the Royal Belfast Academical Institution, and in Switzerland. He served in the British Army during World War I. He was a director of the Eagle Star Insurance Company and Chairman of Vulcanite Ltd.

Maynard Sinclair was one of 133 passengers drowned in the sinking of the ferry MV Princess Victoria on 31 January 1953, en route across the North Channel from Stranraer to Larne. He was survived by his wife, Marjorie Claridge.

The pavilion of the Northern Ireland Civil Service (NICS) Sports and Social Club on the Stormont Estate in Belfast is named the "Maynard Sinclair Pavilion". The children’s ward at the Ulster Hospital at Dundonald is named the "Maynard Sinclair Children’s Ward". There is also a Major J. M. Sinclair Memorial Pipe Band which was formed shortly after his death and can still be found in competition throughout Ireland and Scotland.