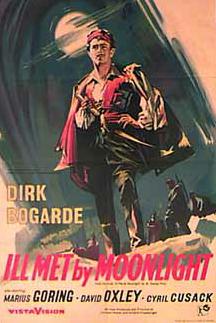 "Ill Met by Moonlight" (1957), also known as "Night Ambush", is a film by the British writer-director-producer team of Michael Powell and Emeric Pressburger, the last film they made together through their Archers production company. The film,which stars and features , David Oxley and , is based on the 1952 book "Ill Met by Moonlight: The Abduction of General Kreipe" by , an account of real events in the author's service on in . The title is a quotation from Shakespeare's "".

During , the Greek island of is occupied by the . A group of British officers led by Major Patrick Leigh Fermor () land on the island and, with the help of local resistance in April 1944, kidnap German General (), the commander of the island. They take Kreipe across very rough country to a secluded cove on the far side of the island, where they are picked up and taken to .

Cast notes:
* and have small parts in the film, Lee as a German officer in the dentist scene, and McCallum, in his film debut, as a sailor on the ship that picks the group up. Lee's part was edited out in the fy|1959 re-release of the film. [TCM [http://www.tcm.com/tcmdb/title.jsp?stid=17677&category=Misc%20Notes Misc. notes] ] There's also a "John Houseman" in the cast, but it appears that this is not the well-known actor, director and advertising icon . [imdb name|1208738|John Houseman]
*Marius Goring had appeared in three other Powell and Pressburger films: "" (fy|1939), "A Matter of Life and Death" (fy|1946) and "The Red Shoes" (fy|1948). [IMDB [http://www.imdb.com/name/nm0330961/ Marius Goring] ] Goring replaced Curt Jürgens, who was the original choice to play the part of General Kreipe.

"Ill Met By Moonlight" was filmed at in England, with location shooting in the in and , and on the in France. [IMDB [http://imdb.com/title/tt0049357/locations Filming locations] ] [ [http://www.powell-pressburger.org/FAQ/FAQ25.html#IllMet P&P Filming Locations] ]

The story was affectionately parodied by in the 1957 "" episode, "Ill Met by Goonlight".