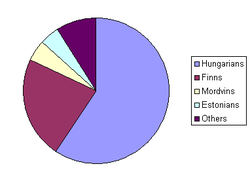 /ˌfɪnoʊˈjuːɡrɪk/ or /ˌfɪnoʊˈuːɡrɪk/),[1] Finno-Ugrian or Fenno-Ugric is a traditional group of languages in the Uralic language family that comprises the Finno-Permic and Ugric language families.

Linguistic roots common to both branches of the traditional Finno-Ugric language tree (Finno-Permic and Ugric) are extremely distant. About 200 words with common roots in all main Finno-Ugric languages have been identified by philologists including 55 about fishing, 15 are about reindeer; and 3 are about commerce. According to philologist Mall Hellam there's only one mutual sentence: “the living fish swims in water.” (Finnish: Elävä kala ui veden alla), (Estonian: Elav kala ujub vee all), (Hungarian: az élő hal vízben úszik). [2]

The term Finno-Ugric languages, which originally represented the entire language-family proposal[citation needed], is sometimes used as a synonym for the more recent term Uralic, including the Samoyedic branch, as commonly happens when a language family is expanded with further discoveries.[3]

The validity of Finno-Ugric as a genetic grouping is under challenge,[4] with some feeling that the Finno-Permic languages are as distinct from the Ugric languages as they are from the Samoyedic languages spoken in Siberia, or even that none of the Finno-Ugric, Finno-Permic, or Ugric branches have been established. Received opinion has been that the eastmost (and last discovered) Samoyed had separated first and the branching into Ugric and Finno-Permic took place later, but this reconstruction does not have strong support in the linguistic data. In the past, and occasionally today as well, the term Finno-Ugric was used for the entire Uralic language family.

Attempts at reconstructing a Proto-Finno-Ugric protolanguage—that is, a common ancestor of all Uralic languages except for the Samoyedic languages—are largely indistinguishable from Proto-Uralic, suggesting that Finno-Ugric may not be a historical grouping but a geographical one, with Samoyedic being distinct due to lexical borrowing rather than actually being historically divergent. It has been suggested that the area where Proto-Finno-Ugric was spoken reached between the Baltic Sea and the Ural mountains.[5]

Traditionally, the main set of evidence for the genetic proposal of Proto-Finno-Ugric has come from vocabulary. A large amount of vocabulary (e.g., the numerals "one", "three", "four" and "six") is only reconstructed up to the level of Proto-Finno-Ugric level, while only words with a Samoyedic equivalent have been reconstructed for Proto-Uralic. This methodology has been criticised, as for the most part no coherent explanation has been presented for the origin of Samoyedic vocabulary (though it does include a number of old loanwords from Proto-Indo-European or its immediate successors), and vocabulary divergences between the Samoyedic group and the rest of Uralic could be due to mechanisms of replacement such as language contact. Proponents of the traditional binary division note, however, that the invocation of extensive contact influence on vocabulary is at odds with the grammatical conservatism of Samoyedic.

The consonant *š (voiceless postalveolar fricative, [ʃ]) has not been conclusively shown to occur in the traditional Proto-Uralic lexicon, but it is attested in some of the Proto-Finno-Ugric material. Another feature attested in the Finno-Ugric vocabulary is that *i now behaves as a neutral vowel with respect to front-back vowel harmony, and thus there are roots such as *niva- "to remove the hair from hides".[6]

Sammallahti (1988) further reconstructs sound changes *oo, *ee > *a, *ä (merging with original *a, *ä) for the development from Proto-Finno-Ugric to Proto-Ugric. Similar sound laws are required for other languages as well. Thus, the origin and raising of long vowels may actually belong at a later stage,[7] and the development from Proto-Uralic to Proto-Ugric can be summarized as simple loss of *x. (The proposed original vowel length only surfaces consistently in the Baltic-Finnic languages.) The proposed raising of *o has been interpreted instead as a lowering *u > *o in Samoyedic (PU *lumi > Proto-Samoyedic *jom).[7]

Typologically, most Finno-Ugric languages are agglutinative languages, which share common features like inflection by adding suffixes (instead of prepositions as in English) and syntactic coordination of suffixes. Furthermore, Finno-Ugric languages lack grammatical gender and thus use one pronoun for both he and she; for example, hän in Finnish, tämä in Votic, tema in Estonian, ő in Hungarian.

In many Finno-Ugric languages possessive adjectives and possessive pronouns, such as my and your, are rarely used. Speakers suggest possession via declension. In those that have developed further towards fusional languages, the genitive of the personal pronoun is used to express possession. Examples: Estonian mu koer 'my dog', colloquial Finnish mun koira, Northern Sami mu beana 'my dog' (literally 'dog of me') or beatnagan 'my dog' (literally 'dog-my'). In others, a pronominal suffix is used, optionally together with the genitive case of a pronoun: thus book Finnish (minun) koirani, 'my dog' (literally 'I-gen. dog-my'), from koira "dog". Similarly, Hungarian, lacking possessive pronouns in their own right, uses possessive noun suffixes, optionally together with pronouns; cf. 'the dog' = a kutya vs. 'my dog' = az én kutyám (literally, 'the I dog-my') or simply a kutyám (literally, 'the dog-my'). Hungarian, however, does have independent possessive pronouns; for example, enyém 'mine', tiéd 'yours', etc. These are also declined; for example, nom. enyém, acc. enyémet, dat. enyémnek, etc.

The relation of the Finno-Permic and the Ugric groups is adjudged remote by some scholars. On the other hand, with a projected time depth of only 3 or 4 thousand years, the traditionally accepted Finno-Ugric grouping would be far younger than many major families such as Indo-European or Semitic, and would be about the same age as, for instance, the Eastern subfamily of Nilotic. But the grouping is far from transparent or securely established. The absence of early records is a major obstacle. As for the Finno-Ugric Urheimat, most of what has been said about it is speculation.

Some linguists criticizing the Finno-Ugric genetic proposal[9] also question the validity of the entire Uralic family, instead proposing a Ural–Altaic, within which they believe Finno-Permic may be as distant from Ugric as from Turkic. However, this approach has been rejected by nearly all other specialists in Uralic linguistics. For refutations, see e.g. Aikio 2003; Bakró-Nagy 2003, 2005; De Smit 2003; Georg 2003; Kallio 2004; Laakso 2004; Saarikivi 2004.

This is a sample of cognates in basic vocabulary across Uralic, illustrating the sound laws (based on the Encyclopædia Britannica and Hakkinen 1979). In general two cognates do not have the same meaning; they merely have the same origin. Thus, the English word in each row should be regarded as an approximation of the original meaning, not a translation of the other words. A sentence that includes only cognate words in Finno-Ugric languages is "The living fish swims in water" (although it is not mutually intelligible).[10]

(Orthographical notes: The hacek denotes postalveolar articulation ('š' [ʃ]), while the acute denotes a secondary palatal articulation ('ś' [sʲ]). The Finnish letter 'y' and the letter 'ü' in other languages represent a high close rounded vowel [y]. The letter 'đ' in the Sami languages and 'δ' in reconstructions represent a voiced dental fricative [ð]. The Sami 'č' is a voiceless postalveolar affricate [t͡ʃ].)

The numbers from 1 to 10 in several Finno-Ugric languages. Forms in italic do not descend from the reconstructed forms.

The number '2' descends in Ugric from a front-vocalic variant *kektä.

The numbers '9' and '8' in Finnic thru Mari are considered to be derived from the numbers '1' and '2' as '10–1' and '10–2'. One reconstruction is *yk+teksa and *kak+teksa respectively, where *teksa cf. deka is an Indo-European loan; notice that the difference between /t/ and /d/ is not phonemic, unlike in Indo-European. Another analysis is *ykt-e-ksa, *kakt-e-ksa, with *e being the negative verb.

The four largest ethnicities speaking Finno-Ugric languages are the Hungarians (15 million), Finns (6–7 million), Estonians (1.1 million), and Mordvins (0.85 million). Three (Hungarians, Finns, and Estonians) inhabit independent nation-states, Hungary, Finland, and Estonia, while the Mordvins have an autonomous Mordovian Republic within Russia. The traditional area of the indigenous Sami people is in Northern Fenno-Scandinavia and the Kola Peninsula in Northwest Russia and is known as Sápmi. Some other Finno-Ugric peoples have autonomous republics in Russia: Karelians (Republic of Karelia), Komi (Komi Republic), Udmurts (Udmurt Republic), Mari (Mari El Republic), and Mordvins (Moksha and Erzya; Republic of Mordovia). Khanty and Mansi peoples live in Khanty-Mansi Autonomous Okrug of Russia, while Komi-Permyaks live in Komi-Permyak Okrug, which formerly was an autonomous okrug of Russia, but today is a territory with special status within Perm Krai.

The linguistic reconstruction of the Finno-Ugric language family has led to the postulation that the ancient Proto–Finno-Ugric people were ethnically related, and that even the modern Finno-Ugric-speaking peoples are ethnically related.[12] Such hypotheses are based on the assumption that heredity can be traced through linguistic relatedness,[13] but this premise is rarely accepted by the modern scientific community: It has not been shown that any contemporary group originated from one single ancient people, barring the earliest humans. Like perhaps all populations, individual groups of Finno-Ugric speakers have a diverse array of cultural, environmental, and genetic influences. However, modern genetic studies have shown that the Y-chromosome haplogroup N3, and sometimes N2, having branched from haplogroup N, which, itself, probably spread north, then west and east from Northern China about 12,000–14,000 years before present from father haplogroup NO (haplogroup O being the most common Y-chromosome haplogroup in Southeast Asia), is almost specific, though certainly not restricted, to Uralic or Finno-Ugric speaking populations, especially as high frequency or primary paternal haplogroup.[14][15]

Some of the ethnicities speaking Finno-Ugric languages are: