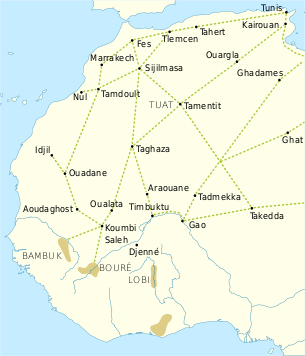 Oualata or Walata (Arabic: ولاته‎) (also Biru in 17th century chronicles)[1] is a small oasis town in south east Mauritania that was important in the thirteenth and fourteenth centuries as the southern terminus of a trans-Saharan trade route.

Oualata is believed to have been first settled by an agro-pastoral people akin to the Mandé Soninke who lived along the rocky promontories of the Tichitt-Oualata and Tagant cliffs of Mauritania. There, they built what are among the oldest stone settlements on the African continent.

The town originally formed part of the Ghana Empire and grew wealthy through trade. At the beginning of the thirteenth century Oualata replaced Aoudaghost as the principal southern terminus for the trans-Saharan trade and developed into an important commercial and religious centre.[2] By the fourteenth century the city had become part of the Mali Empire.

An important trans-Saharan route began at Sijilmasa and passed through Taghaza with its salt mines and ended at Oualata. The Moslem traveller Ibn Battuta used this route in 1352 on his way to the city of Mali, the capital of the Mali Empire.[3][4] On leaving Sijilmasa his caravan took 25 days to reach Taghaza where they stayed for 10 days. The caravan stopped again for 3 days at the oasis of Tasarahla (probably Bir al-Ksaib) to prepare for the last and most difficult 10 day leg of the journey. From Tasarahla a scout was sent ahead to Oualata to arrange for a party to bring water a distance of four days travel to meet the thirsty caravan. Altogether, the caravan took two months to cross the desert.

Ibn Battuta found the inhabitants of Oualata were Moslem and were mainly Massufa. He was surprised by the great respect and independence that women enjoyed. He only gives a brief description of the town itself: "My stay at Iwalatan (Oualata) lasted about fifty days; and I was shown honour and entertained by its inhabitants. It is an excessively hot place, and boasts a few small date-palms, in the shade of which they sow watermelons. Its water comes from underground waterbeds at that point, and there is plenty of mutton to be had."[5]

From the second half of the fourteenth century Timbuktu gradually replaced Oualata as the southern terminus of the trans-Sahara route and Oualata declined in importance.[6][7] The Arab diplomat, traveller and author Leo Africanus who visited the region in 1509-1510 gives a description in his book Descrittione dell’Africa: "Walata Kingdom: This is a small kingdom, and of mediocre condition compared to the other kingdoms of the blacks. In fact, the only inhabited places are three large villages and some huts spread about among the palm groves."[8][9]

The old town covers an area of about 600 m by 300 m, some of it now in ruins.[10] The sandstone buildings are coated with banco and some are decorated with geometric designs. The mosque now lies on the eastern edge of the town but in earlier times may have been surrounded by other buildings. The French historian, Raymond Mauny, estimated that in the middle ages the town would have accommodated between 2000 and 3000 inhabitants.[10] Today, Oualata is home to a manuscript museum, and is known for its highly decorative vernacular architecture. It is also a World Heritage Site.