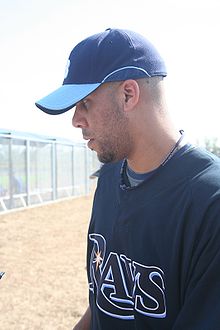 David Taylor Price (born August 26, 1985, in Murfreesboro, Tennessee) is an American Major League Baseball left-handed starting pitcher for the Tampa Bay Rays. Price was selected first overall in the 2007 Major League Baseball Draft by the Rays and made his major league debut in September 2008.

Price pitched out of the bullpen during the Rays' run through the 2008 playoffs. Just weeks after his first appearance in the big leagues, he earned a memorable save in Game 7 of the ALCS, helping his club reach their first World Series. Price became a full-time starter in 2009. In his second full season, he was named the American League starter for the 2010 All-Star Game and finished second in the voting for the 2010 Cy Young Award.

Price began playing baseball in his early childhood. He grew up as an Atlanta Braves fan, and idolized outfielder David Justice.[1] He attended Cooperstown Dreams Park when he was a teenager. As a teenager, he was a stand-out on the Blackman High School baseball and basketball teams.[2] In his high school career, he compiled a 0.43 ERA and 151 strikeouts. He was the recipient of many awards including the Rutherford County MVP Pitcher (2003 and 2004), the Co-District 7AAA Pitcher of the Year his senior season, and the Rutherford County Male Athlete of the Year in 2002, 2003 and 2004. He played in the 2004 High School All-America Game in Albuquerque, New Mexico.[3]

Though drafted by the Los Angeles Dodgers out of high school, Price did not sign, and instead chose to attend Vanderbilt University on an academic scholarship, and pitched for the baseball team for three seasons.

In his freshman season in 2005American by both Baseball America and Collegiate Baseball. That year he went 2–4 with a 2.86 ERA in 19 games, compiling 92 strikeouts in 69.1 innings pitched.[3] Still, frustrated with his college workload, Price almost quit baseball to work at a McDonald's in his hometown but was talked out of it by his coach, Tim Corbin.[4]

In 2006, as a sophomore, Price posted a 9–5 record with a 4.16 ERA in 110⅓ innings pitched. He set a school single-season record in strikeouts with 155 while walking only 43 batters. Over a span of six starts early in the season, he recorded 10 or more strikeouts each game, including a 17-strikeout performance in a game against Arkansas.[3] That year, he was one of five finalists for the Golden Spikes Award and a semifinalist for the Roger Clemens Award. He was also named to the third-team All-American by the National Collegiate Baseball Writers Association, first-team All-South Region by the American Baseball Coaches Association and second-team All-SEC by the coaches in that conference.[3]

As a junior he tallied an 11–1 record with a 2.63 ERA. He was the nation's top strikeout pitcher, striking out 194 batters over 133⅓ innings, breaking his own school record. Price won several major national awards, including college baseball's top honor, the 2007 Dick Howser Trophy,[3] and the 2007 Brooks Wallace Award.[5]

He signed his first professional contract on August 15, 2007. According to The Tampa Tribune, the six-year contract was worth $8.5 million, including a $5.6 million signing bonus. After the contract was approved by Major League Baseball, he was added to the Rays' 40-man roster before being optioned to the minor leagues to begin his career.[6]

According to Baseball America, Price’s bonus is the second-largest in draft history, behind only the $6.1 million Justin Upton received from the Arizona Diamondbacks as the top overall pick in the 2005 Major League Baseball Draft. The guaranteed value is the third-highest in draft history, trailing only Mark Prior ($10.5 million, Cubs) and Mark Teixeira ($9.5 million, Rangers) from the 2001 draft. He made his spring training debut against the New York Yankees, hitting the first batter and striking out the next three in one inning of work. His fastball averaged 98 mph.

Price was first assigned to pitch for the Rays Single-A Vero Beach affiliate. He started six games for Vero Beach, compiling a record of 4–0. He had an ERA of 1.82 with 37 strikeouts in 34.2 innings pitched.

In only his second start in Vero Beach, Price pitched against Pedro Martínez. After the game, Pedro said of Price:

He's amazing, that kid. He's amazing.... that kid is very mature for his time in [the pros], and very talented. Oh my God. God bless him and keep him healthy. That kid did a hell of a job of throwing first-pitch strikes and pounding the strike zone and jamming hitters. I was watching that. He did it like a big leaguer. He had such a command. Right there, I'm challenging you. I'm going to do what I gotta do without any fear. That's the kind of talent you love to see.[6]

After moving up through the Rays' minor league system to the Double-A Montgomery Biscuits in July, Price was promoted to the Triple-A Durham Bulls on August 9, 2008. After compiling an 11–0 combined record at Single-A and Double-A, Price received his first professional loss in his first start at Triple-A Durham.

Price made his major league debut with the Tampa Bay Rays on September 14, 2008, against the Yankees. The first MLB hit he allowed was a home run by Yankees shortstop Derek Jeter; Jeter would later record his 3,000th hit by again homering off Price in 2011. Price pitched 5⅓ innings of relief; he made his first major league start with the Rays on September 22, 2008, against the Baltimore Orioles. He was the winning pitcher in Game 2 of the 2008 ALCS against the Boston Red Sox, earning a post-season victory before winning a regular season game. Price recorded the final four outs in Game 7 of the 2008 ALCS, earning his first career save (regular season or postseason; postseason statistics are recorded separately.) and eliminating the defending champion Red Sox. Price then pitched 2⅓ innings in Game 2 of the 2008 World Series against the Phillies; he gave up two earned runs but nevertheless earned his second postseason save. The next day, Price introduced Barack Obama at a campaign rally in Tampa.[7]

In the 2010 season, Price was the first American League pitcher to reach 10 wins, on June 15. On that date, he was 10–2 and led the league with a 2.31 ERA. Price was selected as the American League starting pitcher for the 2010 All-Star Game in Anaheim, California.[8]

He lost Games 1 and 5 of the 2010 American League Division Series against Cliff Lee and the Texas Rangers.

On July 9, 2011, New York Yankees shortstop Derek Jeter hit a home run off Price in the 3rd inning of a game at Yankee Stadium marking the 3,000th hit of Jeter's Major League career.

Price was named to his second consecutive All-Star game, but did not pitch in the game.

Price throws a pitch also nicknamed a "running fastball" that maintains 94–96 mph and has peaked at 100 mph[9] with good tailing action from right-handed batters. Price also throws a slider that averages 88 mph with a very late and sharp break.[10] He also possesses a changeup which was taught to him by the Rays pitching coach when he arrived in Tampa Bay. However, Price is noted for having some command problems inside the strike zone, and tends to point his front leg toward home plate. He also occasionally drops his arm angle when throwing his changeup, which has led to some home runs during his career. Price sets the pace early in the games, only taking 5–7 seconds to pitch the ball once it is returned by the catcher.[1][11]