The Adventures of Superman (radio)

The Adventures of Superman (radio)

The Adventures of Superman was a long running radio serial that originally aired from 1940 to 1951, adapted from the DC Comics character. (See Superman).

Created by Jerry Siegel and Joe Shuster, the Man of Tomorrow first appeared in Action Comics #1 in 1938. The following year, the newspaper comic strip began and four audition radio programs were prepared to sell Superman as a radio series. When Superman was first heard on radio less than two years after the comic book appearance, the character took on an added dimension with Bud Collyer in the title role. During World War II and the post-war years, the juvenile adventure radio serial, sponsored by Kellogg's Pep, was a huge success, with many listeners following the quest for "truth and justice" in the daily radio broadcasts, the comic book stories and the newspaper comic strip. Airing in the late afternoon (variously at 5:15pm, 5:30pm and 5:45pm), the radio serial engaged its young after-school audience with its exciting and distinctive opening, which changed slightly as the series progressed. Most familiar is the television opening, but the most oft heard radio opening through the mid-1940s was:

"Yes, it's Superman--strange visitor from the planet Krypton who came to Earth with powers and abilities far beyond those of mortal men. Superman, who can leap tall buildings in a single bound, race a speeding bullet to its target, bend steel in his bare hands, and who, disguised as Clark Kent, mild-mannered reporter for a great Metropolitan newspaper, fights a never-ending battle for truth and justice."

By September 5, 1945, the opening, (repeated at the close), had morphed into: "Faster than a speeding bullet. More powerful than a locomotive. Able to leap tall buildings in a single bound.'
Look! Up in the sky!
It's a bird!
It's a plane!
It's Superman!" 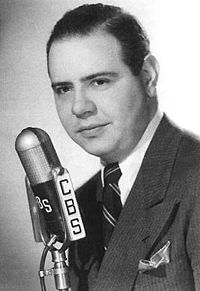 That well known signature opening, one of the most famous in radio history, was delivered by Jackson Beck, the announcer-narrator for the program from 1943 to 1950. He also had recurring roles, voicing an occasional tough guy and also portraying Beany Martin, the Daily Planet's teenage copy boy. On Superman episodes featuring Batman, he played Bruce Wayne's butler, Alfred Pennyworth. Decades later, Beck portrayed Perry White, Clark Kent's boss, in Filmation's The New Adventures of Superman animated series (1966–70) in addition to serving as the show's narrator.[1]

Just as Superman's true identity remained a secret, the identity of radio actor Collyer also remained a secret from 1940 until 1946, when the character of Superman was used in a promotional campaign for racial and religious tolerance and Collyer did a Time magazine interview about that campaign.

Since there were no reruns at that time, the series often used plot devices and plot twists to allow Collyer to have vacation time. Kryptonite allowed Superman to be incapacitated and incoherent with pain while the secondary characters took the focus instead. At other times, Batman (Stacy Harris) and Robin (Ronald Liss) appeared on the program in Superman's absence.

Many aspects associated with Superman, such as kryptonite, originated on radio, as did certain characters, including Daily Planet editor Perry White, copy boy Jimmy Olsen and police inspector Bill Henderson.[2] On March 2, 1945, Superman met Batman and Robin for the first time.

“Clan of the Fiery Cross”

The series delivered a powerful blow against the Ku Klux Klan's prospects in the northern USA. The human rights activist Stetson Kennedy infiltrated the KKK and other racist/terrorist groups. Concerned that the organization had links to the government and police forces, Kennedy decided to use his findings to strike at the Klan in a different way. He contacted the Superman producers and proposed a story where the superhero battles the Klan. Looking for new villains, the producers eagerly agreed. To that end, he provided information—including secret codewords and details of Klan rituals—to the writers. The result was a series of episodes, “Clan of the Fiery Cross,” in which Superman took on the Klan. Kennedy intended to strip away the Klan's mystique. The trivialization of the Klan's rituals and codewords was perceived to have had a negative impact on Klan recruiting and membership.[4]

Reportedly, Klan leaders denounced the show and called for a boycott of Kellogg's products. However, the story arc earned spectacular ratings, and the food company stood by its support of the show.

The amount of inside information about the KKK that was revealed on the show appears exaggerated. A review[who?] of all 16 episodes of the "Clan of the Fiery Cross" storyline reveals that no passwords were revealed on the air and only one ritual was portrayed.

The syndicated series, titled simply Superman, first aired via pre-recorded transcription disks over 11 stations beginning on February 12, 1940, with an origin story, "The Baby from Krypton". The series aired in 15-minute episodes three times a week until May 9, 1941, with the conclusion of the "Nitrate Shipment" storyline. By that time, it had expanded to 63 stations.[5]

The first 19 episodes had individual titles that told one overall story:

The series then moved to multi-part cliffhanger stories, beginning with "The Mystery of Dyerville". Some stories spanned just a few episodes; others, like "The Last of the Clipper Ships", went on for up to 20 parts.

Beginning August 25, 1941, a second series of transcriptions designed to air five days per week (although many stations continued the previous three-per-week schedule) aired. These concluded after 26 weeks with the final installment of "A Mystery for Superman" airing on February 20, 1942:

By the time the syndicated series ceased production, it was airing in 85 North American markets. In June, the Mutual Network discovered it would be losing its #1 juvenile show, "Jack Armstrong, the All-American Boy" to NBC's Blue Network at the end of August. To counter, MBS decided to revive the show, now officially titled The Adventures of Superman, on August 31, 1942.[6] The new series aired live, five days a week. The revival began with two individual episodes, and then returned to the cliffhanger serial format.

Beginning February 7, 1949, The Adventures of Superman episodes expanded to 30 minutes each. All were transcribed. Each episode had an individual story title, including:

The series left MBS with the 60th half-hour show, "The Mystery of the Frozen Monster," on June 24, 1949. It returned as a mystery program targeted toward adults[7] on Saturday, October 29, 1949 at 8:30pm over the ABC network. ABC aired this adult-themed version for 13 weeks, concluding with "Dead Men Tell No Tales" on January 21, 1950. This broadcast marked the final radio appearance of Bud Collyer as Clark Kent/Superman.

On June 5, 1950, ABC revived The Adventures of Superman as a twice-weekly afternoon half-hour series. This version reused the scripts for the 60 MBS half-hour episodes and the 13 "adult" ABC episodes but with new cast members. Michael Fitzmaurice replaced Collyer as Kent/Superman, Jack Grimes replaced Jackie Kelk as Jimmy Olsen, and Ross Martin replaced Jackson Beck as narrator. A total of 78 episodes were produced, with the final broadcast, "The Mystery of the Prehistoric Monster," on March 1, 1951. By then, producer Robert Maxwell was actively preparing Adventures of Superman for television.

In the 1950s, an Australian version of the series had a different cast with Superman played by Leonard Teale.