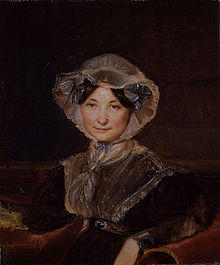 Oil on canvas of Frances Trollope by Auguste Hervieu, circa 1832

Frances Milton Trollope (10 March 1779 – 6 October 1863) was an English novelist and writer who published as Mrs. Trollope or Mrs. Frances Trollope. Her first book, Domestic Manners of the Americans (1832) has been the best known, but she also published strong social novels: an anti-slavery novel said to influence the work of the American Harriet Beecher Stowe, the first industrial novel, and two anti-Catholic novels that used a Protestant position to examine self-making. Recent scholars note that modernist critics tended to exclude women writers such as Frances Trollope from serious consideration.[citation needed]

Born at Stapleton, Bristol, Frances Milton at the age of 30 married Thomas A. Trollope, a barrister, on 23 May 1809 at Heckfield, Hampshire. They had four sons and three daughters, and he struggled with financial misfortune.[1]

In 1827 Frances Trollope took her family to Fanny Wright's utopian community, Nashoba Commune, in the United States. This community soon failed, and she ended up in Cincinnati, Ohio with her sons. Although she tried to find ways to support herself, they were unsuccessful. She encouraged the sculptor Hiram Powers to do Dante Alighieri's Commedia in waxworks. After her return to England, she began writing to support her family.[citation needed]

Two sons also became writers: her eldest surviving son, Thomas Adolphus Trollope, wrote mostly histories: The Girlhood of Catherine de Medici, History of Florence, What I Remember, Life of Pius IX, and some novels. Her fourth son Anthony Trollope became the better known and received novelist, establishing a strong reputation, especially for his serial novels such as The Pallisers.[citation needed]

On her return to England, Trollope began writing and gained notice with her first book, Domestic Manners of the Americans (1832). She gave an unfavourable and, in the opinions of partisans of America, exaggerated account of the subject. She was thought to reflect the disparaging views of American society allegedly commonplace at that time among English people of the higher social classes. The book is also acerbic and witty. Her novel, The Refugee in America (1832), expressed similar views.[citation needed]

Next came The Abbess (1833), an anti-Catholic novel, as was Father Eustace (1847). While they borrowed from Victorian Gothic conventions, the scholar Susan Griffin notes that Trollope wrote a Protestant critique of Catholicism that also expressed "a gendered set of possibilities for self-making", which has been little recognised by scholars. She noted that "Modernism's lingering legacy in criticism meant overlooking a woman's nineteenth century studies of religious controversy."[2]

She received more attention during her lifetime for what are considered several strong novels of social protest: Jonathan Jefferson Whitlaw (1836) was the first anti-slavery novel, influencing the American Harriet Beecher Stowe's Uncle Tom's Cabin (1852). Michael Armstrong: Factory Boy began publication in 1840 and was the first industrial novel to be published in Britain. Other socially conscious novels included The Vicar of Wrexhill (1837 / Richard Bentley, London, 3 volumes), which took on corruption in the Church of England and evangelical circles. Possibly her greatest work is the Widow Barnaby trilogy (1839–1855). This set a pattern of sequels which her son Anthony Trollope also used in his oeuvre.[citation needed]

In later years Mrs. Trollope continued to write novels and books on miscellaneous subjects, writing in all over 100 volumes. She was considered to have powers of observation and a sharp and caustic wit, but her prolific production and the rise of modernist criticism caused her works to be overlooked in the twentieth century. Few of her books are now read, but her first and two others are available on Project Gutenberg.[citation needed] For a full list of her works, see Frances Trollope bibliography.

After the death of her husband and daughter, in 1835 and 1838 respectively, Trollope relocated to Florence, Italy, where she lived until her death in 1863.[4] She was buried near four other members of the Trollope household in the English Cemetery of Florence.[citation needed]