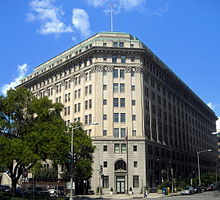 The Federal Home Loan Bank Board Building, which houses the main office of the Federal Bureau of Prisons in Washington, DC

The Federal Bureau of Prisons (often referred to operationally as the BOP)[1] is a federal law enforcement agency subdivision of the United States Department of Justice and is responsible for the administration of the federal prison system. The system also handles prisoners who committed acts considered felonies under the District of Columbia's law. The Bureau was established in 1930 to provide more progressive and humane care for federal inmates, to professionalize the prison service, and to ensure consistent and centralized administration of the 11 federal prisons in operation at the time.

According to its official web site, the Bureau consists of more than 116 institutions, six regional offices, its headquarters office in Washington, D.C.,[2] 2 staff training centers, and 22 community corrections offices, and is responsible for the custody and care of approximately 210,000 federal offenders. Approximately 82 percent of these inmates are confined in Bureau-operated correctional facilities or detention centers. The remainder are confined through agreements with state and local governments or through contracts with privately-operated community corrections centers, detention centers, prisons, and juvenile facilities.[3]

The Bureau is also responsible for carrying out all judicially mandated federal executions (other than those carried out under military law) in the United States, and maintains the federal lethal injection chamber in Terre Haute, Indiana.

Before the Bureau of Prisons

The Federal Prison System existed for more than 30 years before the establishment of the Bureau of Prisons. Although its wardens functioned almost autonomously, the Superintendent of Prisons, a Department of Justice official in Washington, was nominally in charge of Federal prisons,[4] starting with the passage of the Three Prisons Act in 1891, which authorized the Federal Government's first three penitentiaries.

Pursuant to Pub. L. No. 71-218, 46 Stat. 325 (1930), the Bureau of Prisons was established within the Department of Justice and charged with the "management and regulation of all Federal penal and correctional institutions." This responsibility covered the administration of the 11 Federal prisons in operation at the time. While time have passed and laws have changed, the Bureau's responsibilities have grown, as has the prison population. At the end of 1930, the agency operated 14 facilities for just over 13,000 inmates. By 1940, the Bureau had grown to 24 facilities with 24,360 inmates. Except for a few fluctuations, the number of inmates did not change significantly between 1940 and 1980, when the population was 24,252. However, the number of facilities almost doubled (from 24 to 44) as the Bureau gradually moved from operating large facilities confining inmates of many security levels to operating smaller facilities that each confined inmates with similar security needs.[citation needed]

As a result of Federal law enforcement efforts and new legislation that dramatically altered sentencing in the Federal criminal justice system, the 1980s brought a significant increase in the number of Federal inmates. The Sentencing Reform Act of 1984 established determinate sentencing, abolished parole, and reduced good time; additionally, several mandatory minimum sentencing provisions were enacted in 1986, 1988, and 1990. From 1980 to 1989, the inmate population more than doubled, from just over 24,000 to almost 58,000. During the 1990s, the population more than doubled again, reaching approximately 136,000 at the end of 1999 as efforts to combat illegal drugs and illegal immigration contributed to significantly increased conviction rates.[citation needed] 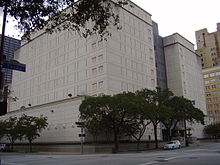 Bureau of Prisons Officers and employees are granted powers of arrest under Title 18, section 3050 of the United States Code under which they may:

(2) make arrests on Bureau of Prisons premises or reservation land of a penal, detention, or correctional facility without warrant for violations occurring thereon of the following provisions: sections 661 (theft), 1361 (depredation of property), 1363 (destruction of property), 1791 (contraband), 1792 (mutiny and riot), and 1793 (trespass) of title 18, United States Code; and

(3) arrest without warrant for any other offense described in title 18 or 21 of the United States Code, if committed on the premises or reservation of a penal or correctional facility of the Bureau of Prisons if necessary to safeguard security, good order, or government property; if such officer or employee has reasonable grounds to believe that the arrested person is guilty of such offense, and if there is likelihood of such person’s escaping before an arrest warrant can be obtained. If the arrested person is a fugitive from custody, such prisoner shall be returned to custody. Officers and employees of the said Bureau of Prisons may carry firearms under such rules and regulations as the Attorney General may prescribe.[5] 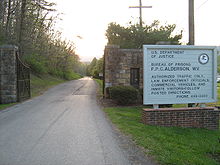 The Federal Bureau of Prisons has converted military bases to prison space. In one case, the bureau converted Yankton College into Federal Prison Camp, Yankton.[11] At least one abandoned federal prison, Alcatraz Island, has been converted into a park and preserved as a historic site.

ADX Florence is the BOP's administrative maximum facility for men

The highest security BOP facility for male prisoners is the ADX Florence supermax in Fremont County, Colorado.[12] The BOP has not designated a "supermax" facility for women. Women in the BOP system who are classified as "special management concerns" due to violence and/or escape attempts are confined in the administrative unit of Federal Medical Center, Carswell in Fort Worth, Texas. Most high security female prisoners reside in special restricted zones within general women's prisons.[13]

The Federal Bureau of Prisons maintains custody of persons convicted of violating federal laws (laws of the Federal Government of the United States) and many pre-trial detainees for the U.S. Marshals Service and the Immigration and Customs Enforcement.[15] In addition several inmates in BOP custody are persons awaiting trial for federal charges against them.[16] The bureau also incarcerates individuals convicted of felonies in the District of Columbia's jurisdiction.[15] The BOP has had custody of the District of Columbia's felons since the passing of the National Capital Revitalization and Self-Government Improvement Act of 1997.[17] Most inmates convicted of violating local or state laws are sent to city, county, or state jails and prisons. The BOP has some state inmates in its custody. In its inmate locator, its website program for locating names, release dates, and locations of people incarcerated in the BOP system, the BOP has records of people who were never convicted of crime but were incarcerated in BOP facilities due to being held for civil contempt, as a material witnesses, or as a pre-trial detainees who were never convicted of federal crimes.[16]

Historically the juvenile population within the Federal Bureau of Prisons mostly consisted of Native American males who had extensive histories of recreational drug use, alcohol abuse, and/or violent behavior. Typically juveniles sent into BOP custody are between 17 and 20, must have been under 18 at the time of the offense and had been convicted of sex-related offenses. This is because the most severe crimes committed on Indian Reservations are usually taken to federal court. According to the BOP, most of the juveniles it receives had committed violent crimes and had "an unfavorable history of responding to interventions and preventive measures in the community." Most federal juvenile inmates were from Arizona, Montana, and South Dakota.[19]

The BOP contracts with facilities that house juvenile offenders. Title 18 U.S.C. 5039 specifies that "No juvenile committed, whether pursuant to an adjudication of delinquency or conviction for an offense, to the custody of the Attorney General may be placed or retained in an adult jail or correctional institution in which he has regular contact with adults incarcerated because they have been convicted of a crime or are awaiting trial on criminal charges." The definition includes secure facilities and community-based correctional facilities. Federally-sentenced juveniles may be moved into federal adult facilities at certain points; juveniles sentenced as adults are moved into adult facilities when they turn 18. Juveniles sentenced as juveniles are moved into adult facilities when they turn 21.[20]

The BOP has the Grand Prairie Office Complex on the grounds of the U.S. Armed Forces Reserve Complex in Grand Prairie, Texas.[21] Within the complex the BOP operates the Designation and Sentence Computation Center (DSCC), which calculates federal sentences, keeps track of the statutory "good time" accumulated by inmates and lump sum extra "good time" awards, and detainers.[22]

The federal death row for men is located at the United States Penitentiary, Terre Haute.[23] As of 2010, the two women on federal death row, Angela Johnson and Lisa M. Montgomery, are held at Federal Medical Center, Carswell.[24][25][26] 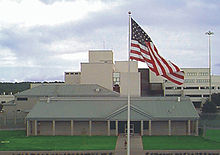