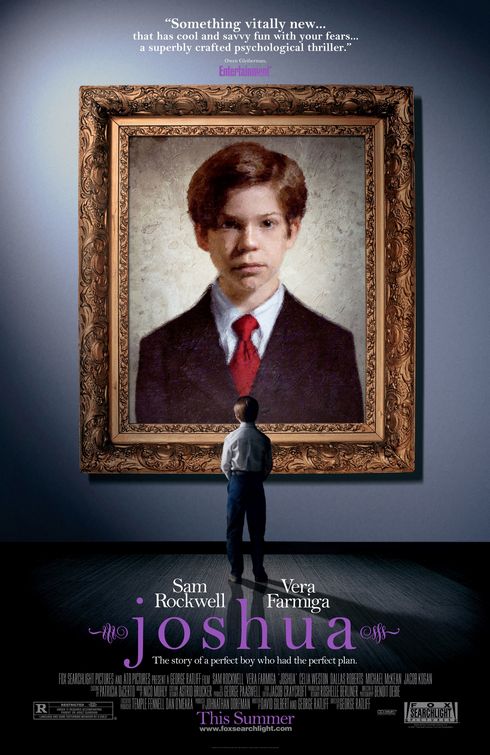 "Joshua" is a 2007 psychological horror/thriller film about an affluent young family, and how they are torn apart by the increasingly psychotic behavior of the mentally disturbed son Joshua. The film was directed by George Ratliff and stars , , and . It was released on , in the United States.

The movie centers around the lives of Brad Cairn and Abby Cairn, an affluent young stockbroker and his wife, raising children in New York City. Their firstborn, the nine-year-old Joshua (Jacob Kogan) is a frighteningly intelligent child - to such a degree that he thinks and acts decades ahead of his age. Nearly always clad in formal wear and demonstrating limitless brilliance as a pianist - with a marked predilection for "dissonant" classical pieces - Joshua gravitates toward his gay aesthete uncle (Dallas Roberts) as a close friend, but distances himself from his immediate kin - particularly when Abby brings a newborn baby sister home from the hospital and unwisely alienates the young boy. As the days pass, one at a time, the mood at the house regresses from healthy and happy to strange, unsettled and disorienting; meanwhile, bizarre events transpire. As the baby's whines drive an already strained Abby to the point of a nervous breakdown, Joshua devolves from eccentric to downright sociopathic behavior, discarding all of his toys, disemboweling a stuffed animal, and killing off pets. Eventually, family members also begin to suffer tragic fates - but the question of whether or not they are Joshua's fevered and psychotic doings or merely the result of happenstance is not answered until the shocking conclusion.

In the last scene where the movie is concludes, it is revealed through a song that Joshua composes impromptu that everything was part of his plan to drive his parents away as he wants to live with his uncle Ned. Everything includes playing wrong notes in the piano, scaring the baby with a torch light at night, stopping his mother's psychological medications, killing the dog and his Guinea pig, taping himself scaring the baby so that his father gets to see it, killing his grandma, forging drawings characteristic of abuse to drive the psychologists to the wrong conclusions, and deliberately misbehaving in public so that his father loses control and beats him (probably for the first time ever) in public, strengthening his case of abuse.

was used widely in the film, and was learned and played by 12-year old . No soundtrack has been made available for this film.