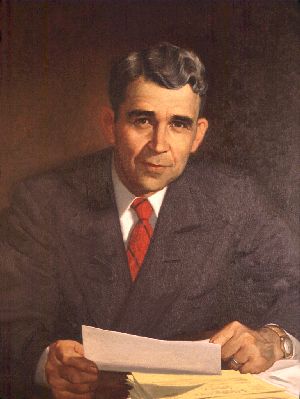 After the "" decision of , , Governor Kennon ordered the continued enforcement of laws relating to segregation. He vowed that the state would provide a system "which will include segregation in fact." Desegregation, however, began under Kennon's successors, and James Houston "Jimmie" Davis, but it was a long process, not completed in Louisiana until 1970.

The Kennon grew disillusioned with his national party and endorsed Republican presidential nominees , , and .

Kennon was the fifth child of Floyd Kennon (1871-1966) and the former Annie Laura Bopp. The Kennons operated a in Minden, the seat of . After Floyd Kennon's retirement, the store was managed by sons Francis Edward Kennon, Sr., and Webb Kennon. Young Bob Kennon was an avid Boy Scout (See .) who attained the rank of Eagle Scout. He graduated in 1919 from Minden High School, then a comparatively new institution. Thereafter, he attended in , where he procured numerous honors. At the end of his freshman year, he received an award for the best academic record. He was of his company in Reserve Officers Training Corps and the vice president of the Interfraternity Council. He was on the team and wrote for the campus , "". He earned his first letter playing center for the LSU team. He helped to organize the university team and was one of the first two people to letter in tennis at LSU. He graduated in 1923.

Kennon graduated from the LSU Law School in 1925, and a month later at the age of twenty-two, he passed the bar exam. By the time he was twenty-three, he had successfully challenged Minden and became for a time the youngest mayor in the United States.fact|date=May 2008 Although his term was considered to have been successful, Kennon did not seek reelection. He was also a commander in the National Guard.

District attorney and then judge

In 1930, he won the election for for the 26th Judicial District, a position that he held for eleven years. He married the former Eugenia Sentell , - , ), a graduate of (then "Louisiana Polytechnic Institute") in Ruston, who taught . Descended from a prominent Minden family, Mrs. Kennon was a sister of the Minden Sherburne Sentell. She was a wonderful hostess and was able to cultivate several friendships that would later play key roles in her husband's race for governor. The Kennons had three sons, Robert, Jr. (born 1938), a lawyer, and Charles Sentell "Charlie" Kennon (born 1940, a physician, both in Baton Rouge, and Kenneth Wood "Kenwood" Kennon (born 1943), also a lawyer, who resides in . Their youngest son, Kenneth, is father to Alex Kennon, an acclaimed actress and writer who attends St. Joseph's Academy of Baton Rouge.

During his time as the D.A., he chose not to seek s for several high profile cases, even though there was sufficient evidence to support criminal prosecution. During this time, he attained the rank of in the National Guard, making him one of the highest ranked officers. Active with the , Kennon was named "Grand Master" in 1936.

Kennon took advantage of his growing circle of influential friends and ran for justice of the state's Second Circuit Court of Appeal in 1940. With 46 percent of the ballots, he nearly won outright in the primary. In the Democratic runoff, his opponent was the Judge , a fellow resident of Minden. He was a powerful opponent, for the Drew family, one of the first to live in Webster Parish, has held judicial positions in north Louisiana for five generations. The race was close, with considerable mudslinging. Kennon won by a margin of nine thousand votes, but he did not carry either his home parish of Webster or neighboring .

The seat would not become vacant until 1942. As an active member of the National Guard, Kennon was called to duty in 1941. Although he did not see active combat, Kennon did not return home from until May 1945. Judge Drew hence served as justice until Kennon returned to claim his seat. Drew died of five years later.

When U.S. Senator died in office, a was called to fill the seat for a two-year term. Kennon's opponent, , the oldest son of the legendary Huey Pierce Long, Jr., was not quite thirty, still a few days too young to take office at the time of the election. The outcome was close, but Long won, 264,143 (51 percent) to Kennon's 253,668 (49 percent). Long's plurality was hence 10,475 votes. Based on the Senate returns, many in the anti-Long faction began to consider Kennon as a possible candidate in 1951. Long held the seat without a serious challenge until he announced his retirement, effective January 1987.

Kennon therefore ran for governor in the 1951 Democratic primary. He won his party's nomination over Judge of Baton Rouge, who had the backing of the Long organizers. Kennon polled 482,302 votes (61.4 percent) to Spaht's 302,743 (38.6 percent). Spaht's running-mate for lieutenant governor was a future governor, John Julian McKeithen, then a 33-year-old state representative from Columbia, the seat of , in northeastern Louisiana. McKeithen was defeated for lieutenant governor by (born 1905), a state senator and an attorney from Ruston, the seat of .

In the low-turnout in the spring of 1952, Kennon trounced Republican Harrison Bagwell, 118,723 (96 percent) to 4,958 (4 percent). Until 1952, Louisiana Republicans had not even offered a token name on gubernatorial general election ballots.

In addition to his interest in state sovereignty, Kennon was the governor who worked to provide voting machines to all Louisiana precincts to replace paper ballots still used in some rural parishes. Such machines were designed to eliminate the periodic problem of vote-stealing.

After his governorship, the Kennons continued to reside in Baton Rouge, where Kennon maintained a law practice.

Kennon's term ended in the spring of 1956, and he was succeeded by his long-time foe, Earl Long. He unsuccessfully attempted to run for governor again in 1963. In the Democratic primary, Kennon ran fourth (127,870 votes or 14.1 percent). He was therefore eliminated from a runoff between Public Service Commissioner John McKeithen of Columbia in and the more liberal contender, former New Orleans Mayor deLesseps Story Morrison, Sr. Some observers theorized that the assassination of , which occurred just days before the primary election, may have weakened Kennon's prospects because Kennon had in a televised address criticized policies of both President Kennedy and Attorney General . He called the Kennedys "young, misguided men." Kennon was also harmed by the presence of the fifth-place candidate, veteran Education Superintendent , a native of in eastern Louisiana, whose votes are believed to have come primarily at the expense of Kennon and therefore worked to deny Kennon the coveted runoff position against Morrison. Jackson was the vocal segregationist among the five candidates, and Kennon discussed "state sovereignty," which some saw as a code word for segregation. Even if half of Jackson's votes had otherwise gone to Kennon, then Kennon, and not McKeithen, would have entered the runoff. Jackson's supporters were also believed in many cases to have been previous backers of the 1959 segregationist gubernatorial hopeful, of . Another candidate in the race was former State Representative from , who had headed the Department of Public Works under outgoing Governor Jimmie Davis.

McKeithen won the runoff and the ensuing general election. Kennon did not endorse either runoff candidate, but his , , son of F.E. Kennon, Sr., later a Democratic member of the from Minden, and a Shreveport-area , stumped for the and pro-Kennedy Morrison, known by the nickname "Chep", much to the consternation of many of his uncle's conservative and supporters in north Louisiana. Morrison had endorsed Kennon in the 1951-1952 election cycle, after the elimination of Morrison's first choice, his former law partner, then Congressman Thomas Hale Boggs, Sr., of New Orleans.