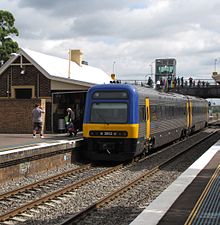 ABB Daimler-Benz Transportation (after 1999 DaimlerChrysler Rail Systems), commonly known under its brand Adtranz, was a multi-national rail transport equipment manufacturer with facilities concentrated in Europe and the USA.

The company was created in 1996 in the merger of Daimler-Benz's and ABB's rail equipment manufacturing facilities, in 1999, DaimlerChrysler (now Daimler AG) bought ABB's shares and changed its official name to DaimlerChrysler Rail Systems. Bombardier Transportation acquired the company in 2001, at which time Adtranz was the world's second largest manufacturer of such equipment. The acquisition significantly increased the size of Bombardier's rail industry holdings making Bombardier the largest rail equipment manufacturer in the world.

On 8 May 1995 ABB and Daimler-Benz proposed a merger of their rail industry related activities into a single autonomous 50:50 joint venture; the combined group would be the largest rail-technology company in the world.[8] In Germany the combined company, along with Siemens would have a duopoly or near-duopoly in the market areas of electric locomotives, mainline and regional electric and diesel multiple units, trams and metros, and catenary systems.[9] In the EU, outside Germany, the merger would have meant no significant market share increase, including Scandinavia, where ABB had a dominant market share.[10] The proposed merger was suspended pending a report on any potential anti-competitive effects of the merger, on 18 October 1995 the merger was allowed, provided that both companies divest themselves of any shares in Kiepe (traction components company).[note 1][11] The merger came into force on 1 January 1996.[12]

The company's manufacturing facilities and product lines were rationalised, including a standard form of car body; after 18 months manufacturing costs had been reduced by 30%,[2] revenues and orders also rose from 1996-7.[4] However the company continued to be loss making, losing $111 million in 1997.[2] Polish manufacturer Pafawag was acquired in 1997 and the facility modernised,[4] controlling interests in MÁV Dunakeszi,[note 2] Hungary and Schindler Waggon Switzerland were also acquired by the end of 1997.[4]

In March 1998 Adtranz presented a set of new product brands for modular product platforms, with designs that can be adapted for the specific requirements of different customers: the Innovia guided transport vehicle, the Incentro low floor tram, the Itino diesel multiple unit, the Crusaris medium-high speed train (based on the GMB Class 71 flytoget trains), and the Octeon electric locomotive.[note 3] A new diesel locomotive design with engine and electrical traction system provided by General Electric was introduced, named "Blue Tiger".[13][14] Adtranz intended to consolidate its product range around these families once on-going deliveries are finished.[15]

Adtranz continued to make an operating loss in 1998, attributed to earlier contracts with underestimated costs, as well as technical problems with products. The same year brought an order for 400 locomotives for Deutsche Bahn, as well as the acquisition of Swiss locomotive manufacturer Schweizerische Lokomotiv- und Maschinenfabrik AG (SLM).[5]

In January 1999 ABB sold its 50% stake in Adtranz to DaimlerChrysler for $472million,[16] taking up a previous agreement made on the formation of the joint venture whereby DaimlerChrysler was required to purchase ABB's stake.[17][18]

In 2000 Adtranz finally achieved profitability.[7] In preparation for a sale from DaimlerChrysler buyers for non-core rolling stock manufacturing businesses were sought.[7] In January 2000 The Greenbrier Companies acquired the freight wagon business based in Siegen.[19][20] The electrical installations business (overhead electrification systems) was sold to Balfour Beatty in late 2000 for €153million.[21] No buyer was found for the railway signalling division.[2]

In August 2000 Bombardier Inc. announced that it was to buy Adtranz for $711million,[note 4] considered to be a low price.[22] The sale was cleared by the European Union in April 2001; amongst the guarantees required to be made by Bombardier was that it would divest and license its product range in the regional and tram sectors to Stadler Rail due to the large German market share of the new group in those areas, making Stadler a viable independent company.[23] The takeover came into legal effect on 1 May 2001 with a final price of $725million.[24][25] In 2002 Bombardier announced that it was to sue DaimlerChrysler for $867million due to alleged misleading financial information regarding Adtranz provided by DaimlerChrysler during the takeover,[26][27] in September 2004 the case was settled with the companies agreeing to a $209million reduction in price.[28]

The brand Adtranz[29] was created by Landor Associates as part of the corporate identity of ABB Daimler Benz Transportation.[30] It is an acronym derived from selected letters of the complete name of the first company using it: ABB Daimler-Benz Transportation, with a z in place of an s at the end for the name to imply a complete product platform from A to Z.[30] It was capitalised by the companies with a capital D as ADtranz, following the standard English text formatting and capitalization rules it is spelled with a small d as Adtranz. Above the text ADtranz, the company logo included a green dot, symbolizing a signal set on green, as well as the environmental friendliness of railways.[30] Beside ADtranz there was also the slogan ADtranz - we speak railways[31] in use. Both brands have been discontinued after the take over of DaimlerChrysler Rail Systems by Bombardier. The rights on the slogan have been deleted 2007 and of the name Adtranz 2008.