Roberts was born in Tavares, Florida, and raised in Apopka, Florida where he was interested in both auto racing and baseball. He was a pitcher for the Zellwood Mud Hens, an American Legion baseball team, where he earned the nickname "Fireball" because of his fast ball, not his driving style, which is sometimes disputed. He enlisted with the Army Air Corps in 1945, but was discharged after basic training because of asthma.

He attended the University of Florida and raced on dirt tracks on weekends. In 1947, at the age of 18, he raced on the Daytona Beach Road Course at Daytona for the first time. He won a 150-mile race at Daytona Beach the following year.

Roberts continued to amass victories on the circuit, despite the changes in NASCAR as it moved away from shorter dirt tracks to superspeedways in the 1950s and 1960s. In his 206 career NASCAR Grand National races, he won 33 times and had 32 poles. He finished in the top five 45 percent of the time. He won both the Daytona 500 and Firecracker 250 events in 1962 driving a black and gold 1962 Pontiac built by car builder legend Smokey Yunick.

In 1961 Roberts, temporary President of the Federation of Professional Athletes was in dispute with NASCAR President Bill France over the Teamsters' Union affiliate - the FPA - which he and Curtis Turner had helped organize and France was trying to kill.[1] Unlike the banned Curtis Turner and Tim Flock, Roberts soon returned to the NASCAR fold. 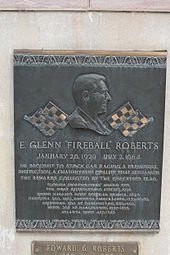 On May 24, 1964, at the World 600 in Charlotte, Roberts had qualified in the eleventh position and started in the middle of the pack. On lap 7, Ned Jarrett and Junior Johnson collided and spun out and Roberts crashed trying to avoid them. Roberts' Ford slammed backward into the inside retaining wall, flipped over and burst into flames. Witnesses at the track claimed they heard Roberts screaming, "Ned, help me!" from inside his burning car after the wreck. Jarrett rushed to save Roberts as his car was engulfed by the flames. Roberts suffered second- and third-degree burns over 80 percent of his body and was airlifted to a hospital in critical condition. Although it was widely believed that Roberts had an allergic reaction to flame-retardant chemicals, he was secretly an asthmatic and the chemicals made his breathing worse.[2]

Roberts was able to survive for several weeks, and it appeared he might pull through. But Roberts' health took a turn for the worse on June 30, 1964. He contracted pneumonia and sepsis and slipped into a coma by the next day. He died on July 2, 1964.

Roberts' death, as well as the deaths of Eddie Sachs and Dave MacDonald at the Indianapolis 500 six days later, led to an increase in research for fire-retardant uniforms. It also led to the development of the Firestone RaceSafe fuel cell, and all race cars today use a foam-backed fuel cell to prevent severe fuel spillage of the massive degree that Roberts had. Also, fully fire-retardant coveralls would be phased in leading to the now mandatory Nomex racing suits. Roberts had just lost close friend Joe Weatherly in the January Motor Trend 500 at Riverside, California, making 1964 a black year for major league auto racing.

Prior to his death, there were many sources that Roberts was retiring, since he had taken a prominent public relations position at the Falstaff Brewing Company and the race in which he was killed was to be one of his final races of his career.[3]

Despite having his career cut short and having never won a Grand National title, Fireball Roberts was named one of NASCAR's 50 Greatest Drivers.

In 2000 the city of Concord, North Carolina named a street near Charlotte Motor Speedway in his honor.

Ned Jarrett has stated that his decision to retire was prompted by Roberts' death.

After Roberts' death, NASCAR mandated that all drivers must wear flame retardant coveralls while on track. They also instituted the five point safety harness, and the special, contoured drivers seat, all three of which are still requirements on all NASCAR entrants.

The second picture is of Banjo Mathews leading Bobby Johns. Fireball drove the #22 car and had a three speed transmission while the other Pontiacs like Mathews had four speeds. Reference Motor Trend in 1962 and http://www.racing-reference.info/race?id=1962-29&series=W