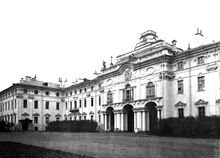 Upper terrace of the Constantine Palace in 1921

Strelna (Russian: Стре́льна) is a municipal settlement in Petrodvortsovy District of the federal city of St. Petersburg, Russia, situated about halfway between St. Petersburg proper and Petergof and overlooking the shore of the Gulf of Finland. Population: 12,773 (2010 Census preliminary results);[1] 12,751 (2002 Census).[2]

Palace of Peter I

Formerly a Swedish chancellor's estate, Strelna was chosen by Peter the Great as a place for his future summer residence in 1714. Jean Baptiste Le Blond, famous for his work with André Le Nôtre at Versailles, was commissioned to prepare designs for the would-be palace and park. Le Blond envisaged the palace as a Chateau d'Eau, situated on a round island. The gardens were laid out to Le Blond's design, but the master's death prevented him from completing a more elaborate project for the palace.

In 1718, a temporary wooden palace was constructed in Strelna. It had been used by the Russian royalty as a sort of hunting lodge, and has been faithfully preserved to this day. After Le Blond's death, the commission to build the grand palace passed to Nicholo Michetti, a disciple of the great Carlo Fontana. A cornerstone was laid in June 1720, but next year it became apparent that the place was ill-adapted for installation of fountains, so Peter decided to concentrate his attention on the nearby Peterhof. Disappointed Michetti left Russia, and all works in Strelna were suspended.

On ascending the throne in 1741, Peter's daughter Elizabeth intended to complete her father's project. Her favourite architect Bartolomeo Rastrelli was asked to expand and aggrandize Michetti's design. But Rastrelli's attention was soon diverted to other palaces, in Peterhof and Tsarskoye Selo, so the Strelna palace stood unfinished until the end of the century. 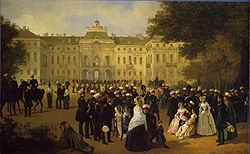 Leib Guard reception at the Constantine Palace. A 19th-century painting.

Family home of the Konstantinovichi branch of the Romanovs

In 1797, Strelna was granted to Grand Duke Constantine Pavlovich (second son of Paul I) and his wife Grand Duchess Anna Feodorovna (aunt of Queen Victoria). Despite a great fire in 1803, the Constantine Palace was completed by 1807. Andrei Voronikhin and Luigi Rusca were held responsible for architecture of its upper storeys. After Constantine's death, the palace passed to his nephew, and the Konstantinovichi branch of the Romanov dynasty retained its ownership until the Revolution.

Vicissitudes in the 20th century

Constantine Palace after renovation during the 300th anniversary of Saint Petersburg

After 1917 the palace fell into decay: it was handed over to a child labour commune, then to a secondary school. For a period during World War II the Germans occupied Strelna and had a naval base there. Some Decima Flottiglia MAS men and attack boats were brought from Italy and based at Strelna. Russian commando frogmen attacked that base and destroyed those boats.

After the ravages of German occupation, only the palace walls were left standing, all interior decoration was gone. No effective restoration had been undertaken until 2001 when Vladimir Putin ordered the palace to be converted into a presidential residence in St. Petersburg. The park with canals, fountains and drawbridges was then recreated to Le Blond's original designs, complete with a water-bound pavilion by the sea shore. In front of the palace are the equestrian statue of Peter the Great, originally installed in 1911 in Riga, while Mikhail Shemyakin's modernist sculpture of Peter's family strolling through the garden may be found closer to the sea shore. Several rooms in the restored palace are dedicated to the poet Konstantin Romanov (who was born there).

In preparation for the celebration of the 300th anniversary of the founding St. Petersburg, the Russian government decided to restore the palace and its grounds as a state conference center and presidential residence. The renovated Constantine Palace hosted more than fifty heads of state during St. Petersburg tercentenary celebrations in 2003. Three years later, in July 2006 (July 15–17), it hosted the 32nd G8 summit. During these summits, the world leaders were accommodated in eighteen luxurious cottages by the sea-side. Each of the cottages is named after a historic Russian town. The early 19th-century stables were reconstructed into a four-star hotel for other visitors.

In the vicinity of the Constantine Palace several other Romanov residences may be seen. The baroque Znamenka, designed by Rastrelli, used to be a home to the Nikolaevichi branch of the Romanovs. The neoclassical Mikhailovka palace once belonged to the Mikhailovichi branch of the family.

Other landmarks in Strelna include a dacha of Mathilde Kschessinska and the ruined Maritime Monastery of St. Sergius, with numerous churches by Luigi Rusca. The monastery is noted as a burial place of the Zubov brothers and other Russian nobles. The imperial chancellor Alexander Gorchakov was interred here in 1883.

The Constantine Palace, the Trinity Monastery, Mikhailovka, and Znamenka are parts of the World Heritage Site Saint Petersburg and Related Groups of Monuments.