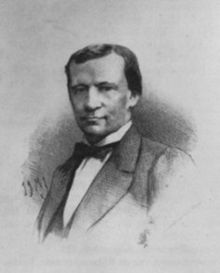 Busken Huet attended Gymnasium Haganum.[1] He was trained for the Church, and, after studying at Geneva and Lausanne, was appointed pastor of the Walloon chapel in Haarlem in 1851. In 1863 conscientious scruples obliged him to resign his charge, and Busken Huet, after attempting journalism, went out to Java in 1868 as the editor of a newspaper. Before this time, however, he had begun his career as a polemical man of letters, although it was not until 1872 that he was made famous by the first series of his Literary Fantasies, a title under which he gradually gathered in successive volumes all that was most durable in his work as a critic. His one novel, Lidewyde, was written under strong French influences.[2]

Returning from the East Indies, Busken Huet settled for the remainder of his life in Paris. For the last quarter of a century he had been the acknowledged dictator in all questions of Dutch literary taste. Perfectly honest, desirous to be sympathetic, widely read, and devoid of all sectarian obstinacy, Busken Huet introduced into Holland the light and air of Europe. He made it his business to break down the narrow prejudices and the still narrower self-satisfaction of his countrymen, without endangering his influence by a mere effusion of paradox. He was a brilliant writer, who would have been admired in any language, but whose appearance in a literature so stiff and dead as that of Holland in the fifties was dazzling enough to produce a sort of awe and stupefaction. The posthumous correspondence of Busken Huet has been published, and adds to our impression of the vitality and versatility of his mind. Also, Huet used papers by Peter Thaborita for his description of Pier Gerlofs Donia.[2]