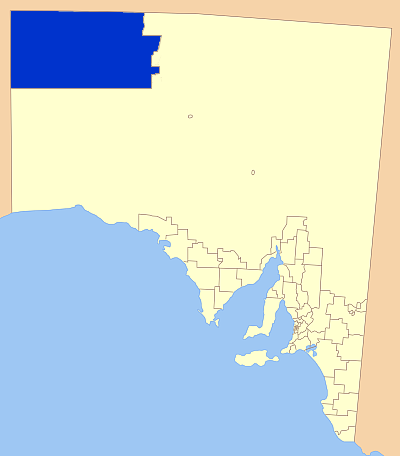 Anangu Pitjantjatjara Yankunytjatjara (APY) is a large Aboriginal local government area located in the remote north west of . It consists of the , and peoples (or ), and has a population of around 2500 people.

The council was formed in by the passing of the [ [http://www.austlii.edu.au/au/legis/sa/consol_act/apylra1981489/ Anangu Pitjantjatjara Yankunytjatjara Land Rights Act 1981 at "Australasian Legal Information Institute"] ] by the , and includes the , and groups. These groups have a long association with the area.

'Ara Irititja' is a project of the APY, commenced in to identify, copy and electronically record historical materials about Anangu (Pitjantjatjara/Yankunytjatjara people). Its purpose is to prevent the loss of the history, and to allow the teaching of it to others in the .

The peoples of the region have not had any major development, apart from , but there have been proposals to mine the area. There is also the Mintabie fields located in the area but separate. [ [http://www.oacdt.sa.gov.au/communities/map_of_communities/mintabie Mintabie profile at Outback Areas Community Development Trust] ]

The Block in the Pitjantjatjara Lands, in 's far north-west, has been viewed as having billions of dollars in potential deposits and . But the Yankunytjatjara Pitjantjatjara people, have been wary of opening up the area to mining, concerned about the impact on sacred sites and the environment. There is ongoing discussion with mining companies to allay these worries.

For decades two major issues throughout the APY Lands have been the low standard of health care (comparative with the rest of Australia) and drug abuse, namely alcohol, , then and now other illicit drugs. There are manifest causes for these issues, but part of the problem with stamping out alcohol and illicit drug use has been the straddling of the indigenous areas of three jurisdictions: , and the . The jurisdictional crossover has made police enforcement of drug trafficking laws difficult. However, recent collaboration has started to deliver results. [Adelaide Advertiser, 23 July 2007 [http://www.news.com.au/adelaidenow/story/0,22606,22116314-5006301,00.html] ]

*In July 2007 SA Police in co-operation with liquor outlets in (250km to the south-east entrance to the Lands) agreed to create a register of alcohol purchases, to enable police to identify persons who purchased large quantities of alcohol in Coober Pedy potentially for transportation into Aboriginal lands.

* in July 2007, UnitingCare Wesley set up a website [http://www.papertracker.com.au papertracker.com.au] to monitor State and Federal Government spending promises for the APY Lands, tracking the delivery of those promises

*In early August 2007, the Rann South Australian Labor Government announced a $34 million AUD package to "improve well-being of Aboriginal people" in the APY Lands. $25m will be spent on improving housing and most of the remaining $8m on law enforcement in Amata and Pukatja [ [http://www.premier.sa.gov.au/news.php?id=1971 "$34 million package for the APY Lands" 'Minister Weatherill Media Release, 3 August 2007'] 'Retrieved on August 8, 2007'] .

*In November 2007, SA Police Commissioner Mal Hyde announced the signing of a new enterprise agreement for SA Police that would include incentive packages to lure police to work in rural and remote areas such as the APY Lands [ [http://www.abc.net.au/news/stories/2007/11/15/2091476.htm?site=southeastsa "Cash Incentives to boost rural SA policing" 'ABC News Online, November 15, 2007'] 'Retrieved on November 27, 2007']

*In May 2008, retired Supreme Court judge the Hon E. P. "Ted" Mullighan QC delivered his supplementary report to his Children in State Care inquiry, entitled the "Children on Anangu Pitjantjatjara Yankunytjatjara (APY) Lands Commission of Inquiry - a Report into Sexual Abuse" in which Commissioner Mullighan begins in the Preface as follows:

"This Inquiry has uncovered a sad stream of stories from the Lands. I have heard that sexual abuse of children on the Lands has been widespread throughout the communities for many years..." [ [http://www.service.sa.gov.au/ContentPages/sagovt/mullighaninquiry_apy.aspx Mullighan Inquiry Report] 'Retrieved on May 7th, 2008']

98% of the residents were Australian-born (compared to 86.1% nationwide).

46.1% identified with being affiliated with the (compared to 5.7% with that affiliation nationwide), explainable by the UCA's significant presence in each community.

Median incomes in the APY Lands were significantly lower than the Australian population, with a median individual weekly income of $219/week compared with $466/week nationwide.

The APY Lands have a significantly larger proportion of single-parent families (30.1% cf 15.8% nationwide).

Home ownership is a distant reality for most people on the APY Lands, with only 7% of residents either fully owning or in the process of purchasing their own home - compared with 32.6% of Australians fully owning and 32.2% purchasing (a nett of 64.8%). The majority of APY Lands residents are likely to have a landlord.

The UnitingCare Wesley Adelaide project, [http://www.papertracker.com.au "Paper Tracker"] describes that as from October 2007 a bus service will operate through the lands connecting via Marla to :

In 2004, the South Australian Government allocated funding for a public transport bus service on the APY Lands. From October 2007, a twice-weekly return service will run from Alice Springs to Marla via main communities on the eastern-side of the APY Lands. [ [http://www.papertracker.com.au/index.php?option=com_content&task=view&id=80&Itemid=57 APY Lands: public transport bus service] Paper Tracker Project, UnitingCare Wesley "Retrieved on October 2, 2007"]

Even in this remote area, houses have telephones, access to multiple television channels including ( and ABC), and mail is delivered twice weekly by air from . Many of the localities described above are slated for delivery in the near future.

In 2008, the proposes under its local government reforms to create the which will span the south of the Territory from western to eastern border, thereby comprising the adjoining LGA across the top of the APY Lands.

The in is not an LGA, but is the authority responsible for the development of areas adjoining the APY Lands (not including to the south and the to the non-immediate, but relatively nearby, south-east).