Born in prison to parents who had been jailed because they were Christian, Mammes became an orphan when his parents were executed. After his parents' death, Mammes was raised by a rich widow named Ammia, who died when Mammes was 15 years old.

Mammes was tortured for his faith by the governor of Caesarea and was then sent before the Roman Emperor Aurelian, who tortured him again. The Mammes legend states that an angel then liberated him and ordered him to hide himself on a mountain near Caesarea.

Mammes was later thrown to the lions, but managed to make the beasts docile. He preached to animals in the fields, and a lion remained with him as companion. Accompanied by the lion, he visited Duke Alexander, who condemned him to death.[3] He was struck in the stomach with a trident. Bleeding, Mammes dragged himself to a spot near a theater before his soul was carried into heaven by angels.[4]

The center of his cult was situated at Caesarea before shifting to Langres when his relics were brought there in the 8th century.[3] The Cathédrale Saint-Mammès, in Langres, is dedicated to him. Mammes is the chief patron of the diocese. The Diocese of Langres also honors as saints a number of martyrs who died in the persecution of Marcus Aurelius, such as the triplets, Saints Speusippus, Eleusippus, and Melapsippus.

Saint Mammes is also a popular saint in Lebanon with many churches and convents named in his honor. He is the patron saint of Deir Mimas in Lebanon and of Kfarhata, which is adjacent to Zgharta. The Church of Saint Mamas Church in Ehden was built in 749 A.D. and is one of the oldest Maronite Catholic churches in Lebanon. Lebanon is also home to the Saint Mamas Church of Baabdat, which was built in the 16th century. 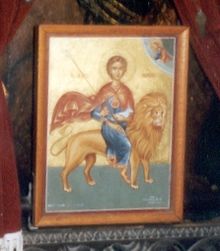 St Mamas, the lamb and the lion: icon in the church at Morphou

In Cyprus, Mammes is popularly known as a poor hermit who lived in a cave near the town of Morphou. According to local legend, he was a hermit living in very poor circumstances, and when the authorities tried to tax him, he evaded them. Soldiers were sent out and captured him, but on the way back to town, Mammes saw a lion attacking a lamb, escaped the soldiers, saved the lamb, jumped on the lion's back, and rode it into town. His bravery earned him exemption from taxation.[5]

Morphou has a celebrated church dedicated to Mammes. Since 1974, Turkish occupying troops have denied Christian Cypriots consistent access to religious sites, although they have generally allowed access to the church on Saint Mammes Day.[citation needed] However, during the 2008 celebration, access was once again denied.[citation needed]

There are numerous churches dedicated to Mammes of Caesarea in Greece and there are even villages in Greece named Agios Mamas (Saint Mammes in Greek) after him in Chalkidiki and Laconia.

Pilgrims on their way to Santiago de Compostela diffused his cult into Spain.

A statue depicting Mammes and a lion can be found in the Casa de la Misericordia in Bilbao, which was once the convent of San Mamés and whose current chapel holds an alleged relic of the saint, a piece of bone from his craneum.[7] The stadium that is home to the Athletic Club de Bilbao is called San Mamés Stadium, and players of that club are called the "lions of San Mamés" because their stadium was built near these premises.[8]

His head is said to rest in the parish church of Santa María Magdalena in Zaragoza.

An alternative legend states that he was devoured by lions.

At Tábara, also in Spain, he is venerated alongside Saint Blaise.[9]

In some regions of Italy, above all in the so called "Brianza" near Milan, San Mamete is particularly venerated by women who have born a child, in order to obtain an abundant quantity of milk for the newborn. Special rites took place until recent times: the woman who felt the need to ask the help of the Saint went to the church bringing some bread and some cheese, which she placed them upon the altar for some time. Then she went out, and was obliged to offer the bread and cheese to the first person she encountered. She hoped, so doing, to get by San Mamete's mercy a lot of pan di fioeu ("bread of children", i.e. milk).[10]