Scouting in New Jersey has a long history, from the 1910s to the present day, serving thousands of youth in programs that suit the environment in which they live. In fact, the second National BSA Headquarters was in North Brunswick.

Camp Glen Gray, located in Bergen County, New Jersey (Northern New Jersey Council) has been continually active since 1917, and was originally 150 acres (0.61 km2) located in a valley in the Ramapo Mountains in New Jersey. Camp Glen Gray is named after Frank Fellows Gray, (1869–1935) a well known early professional Scouter of that area. It was selected and developed by Gray to give a permanent summer camp for Scouts, and the camp is the first purpose-built Scout camp in New Jersey. Prior Scout summer camping experiments were typically were temporary affairs at farm fields or church camps. Frank Gray was one of America's earliest Scoutmasters, having started Troop 4 in Montclair, New Jersey, known as the "Lord Baden-Powell Troop" in March 1909. He also created an honor program that was used in New Jersey and in the Brooklyn Council called "Senior Division". The camp ultimately reached a size of about 840 acres (3.4 km2) and was operated by Eagle Rock Council, then Essex Council, and finally Northern New Jersey Council. In 2003, the camp was sold to the Bergen County Parks Commission and operated through a management agreement by the non-profit group Friends of Glen Gray, and is supported by a group of volunteers known as the "Old Guard". While no longer an "official" Boy Scout Camp, it does continue to host a large number of Scouting groups and activities throughout the year, as well as hosting a summer day camp for an area special-needs school.

Notable Scout Walter Marty Schirra, Jr. (March 12, 1923 – May 3, 2007) earned the rank of First Class in Troop 36 in Oradell, New Jersey. He was one of the original Mercury 7 astronauts. He was also the only person to fly in all of America's first three space programs (Mercury, Gemini and Apollo).

Cub Scouting Origins – To begin including younger boys to Scouting, James E. West approved the formation of the Boy Rangers of America, a separate organization for boys eight through twelve based on an American Indian theme. The Boy Rangers used the Scout Law and Chief Guide Emerson Brooks was a Boy Scout commissioner in Montclair, New Jersey. The BSA finally began some experimental Cubbing units in 1928 and in 1930 the BSA began registering the first Cubbing packs, and the Boy Rangers were absorbed. The Cub Scouting program used elements of Rudyard Kipling's Jungle Book series, with the Cubmaster taking the role of Akela and the assistant Cubmaster the role of Baloo. The American program also syncretized American Indian elements, with all Cub Scouts belonging to the Webelos tribe, symbolized by the Arrow of Light and led by Akela. Webelos was also an acronym meaning Wolf, Bear, Lion, Scout. The initial rank structure was Wolf, Bear and Lion, with ages of 9, 10 and 11. Dens of six to eight Cubs were entirely led by a Boy Scout holding the position of den chief.

Mortimer L. Schiff – After a long tenure as vice-president of the BSA beginning in 1910, during which he also appeared on the cover of Time magazine on February 14, 1927, Mortimer L. Schiff was elected as president in 1931, but died after serving one month and Walter Head returned until 1946. Schiff's mother purchased and donated 400 acres (1.6 km2) of land in New Jersey and donated it to the BSA, thus creating Mortimer L. Schiff Scout Reservation as a national training center. Both Mortimer and his son, John M. Schiff, received the Silver Buffalo Award from the BSA.

William "Green Bar Bill" Hillcourt – William Hillcourt was one of the BSA's most prolific writers. He wrote numerous articles for Boys' Life and Scouting magazines, including a column aimed at patrol leaders under the by-line of "Patrol Leader Green Bar Bill". At least 12,610,000 copies of his three editions of the Boy Scout Handbook were printed. Hillcourt died in Europe while on a Scouting tour in 1992. He is buried with his wife Grace in St. Joseph's Cemetery in Mendham, New Jersey at Row 8, Block I, to be near Mortimer L. Schiff Scout Reservation as he had lived for so many years. His legacy in Scouting and his influence continue in the programs and training of Scouting. Consequently, his writings are still used within the Scouting movement and his material continues to be reprinted in Scouting magazine.[21] The Hiawatha Seaway Council operates the William Hillcourt Scout Museum at Camp Woodland in New York to "keep the traditions of Scouting alive" through the preservation of the history that is a foundation for today's Scouting movement

In 1954, the National Council of the Boy Scouts of America moved its National Headquarters from New York City to a new site at the southwest corner of US Routes 1 and 130 in New Brunswick, New Jersey. It also located the Johnston Museum of Scouting history and a conservation education trail there. The national headquarters then moved to Irving Texas in 1979.

There are eight Boy Scouts of America local councils in New Jersey.

Order of the Arrow Lodge: Hunnikick 76

The Jersey Shore Council serves all of Ocean County and Atlantic County, and part of Burlington and Cape May Counties.

The Minsi Trails Council is a council of the Boy Scouts of America that serves Scouts of eastern Pennsylvania's Lehigh Valley and Pocono regions as well as parts of western New Jersey.

Order of the Arrow: Te'kening Lodge 37

The following is a partial list of councils (and their districts) in New Jersey that have ceased to exist due to mergers with other councils. 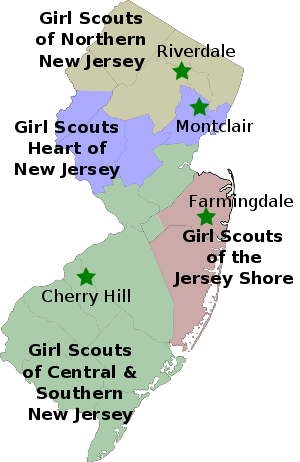 New Jersey is divided into four councils that were created by rearrangement of the previous eleven councils in 2007.

The Girl Scouts of Central & Southern NJ covers 9 and a bit counties (Atlantic, Burlington, Camden, Cape Kay, Cumberland, Gloucester, Mercer, Middlesex, Salem, and parts of Monmouth) and serves over 27,000 girls and 11,000 adults. The council includes 3 service centers, 6 camps and 2 mobile resource centers. It was formed by the merger of Camden, Delaware-Raritan, and South Jersey Pines Councils on October 1, 2007. Planned merger date was July 1, 2007, but due to Delaware-Raritan's changed vote, the councils merged on October 1, 2007.

Online Shop (for badges, uniforms, and much more): http://shop.gshnj.org/

Girl Scouts of the Jersey Shore

Girl Scouts of the Jersey Shore serves some 16,000 girls and has 6,000 adult volunteers in Ocean and most of Monmouth counties. Created in July 2007 by the merger of Monmouth and Ocean County Councils.

Girl Scouts of Northern New Jersey serves 20.5% of girls aged 5-17 in 160 municipalities including all of Bergen, Morris, Passaic, and Sussex counties and the northern half of Warren County. As of 2011 there were 33,795 girl members and 17,395 adult members.[2] It was formed on October 1, 2007 by the merger of Bergen, Leni-Lenape, and Morris Area Girl Scout Councils.

The following New Jersey councils ceased to exist in 2007 due to mergers.

The New Jersey Scout Museum in Morganville was established as an independent non-profit in 2004 and concentrates on history of Girl Scouts and Boy Scouts in New Jersey.