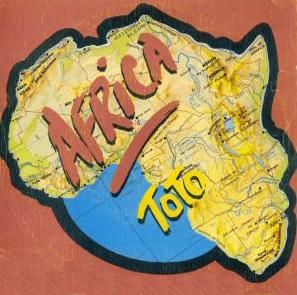 "Africa" is a song by rock band Toto. The song was included on their 1982 album "", and reached number one on the chart in February 1983 and number three on the the same month. The song was written by the band's keyboardist , who also sings both verses of the song, and drummer . sings the chorus.

Unarguably Toto’s most recognizable song, “Africa” hit Number 1 on the => Billboard Charts in February, 1983. It was almost cut from the Toto IV record prior to its release. Having spent an incredible amount of time producing the tune, the band became so tired of the song that they didn’t want it on the album. The song itself was very different from anything the band had done before, and some members felt that it didn’t sound like Toto.

“I didn’t think it was very good,” said Steve Lukather (Classic Rock Revisited, 2003). “That tells you what can happen when we pick our own singles!”

David Paich, who co-wrote the song with Jeff Porcaro, said that it “could have been the beginning of a solo project [for me] because it was so different. I thought I’d save it… [because] wasn’t around then.”

The initial idea for the song came from David Paich, playing on his piano. Jeff explains the idea behind the song: "... a white boy is trying to write a song on Africa, but since he's never been there, he can only tell what he's seen on TV or remembers in the past."

Musically the song took quite some time to assemble, as David and Jeff explain below.

David Paich on the Yamaha keyboards used:"On 'Africa' you hear a combination of marimba with GS 1. The kalimba is all done with the GS 1; it's six tracks of GS 1 playing different rhythms. I wrote the song on CS-80, so that plays the main part of the entire tune." (Keyboard, 09/1995)

Jeff Porcaro reminisces about how the song's iconic drum track was created:

I was about 11 when the New York’s World Fair took place, and I went to the African pavilion with my family. I saw the real thing; I don't know what tribe, but there were these drummers playing, and my mind was blown. The thing that blew my mind was everybody was playing one part. As a little kid in Connecticut, I would see these Puerto Rican and Cuban cats jamming in the park. It was the first time I witnessed someone playing one beat and not straying from it, like a religious experience, where it gets loud, and everyone goes into a trance. I have always dug those kind of orchestras, whether it be a band of all drummers. But I just love a band of guys saying one thing. That's why I loved marching band, and I said, "Gee, someday there's going to be a little drum orchestra where everybody plays one thing, and you don't stray from it. You do it until you drop. You're banished from that land if you move from that one part.

So when we were doing "Africa", I set up a bass drum, snare drum and a hi-hat, and Lenny Castro set up right in front of me with a conga. We looked at each other and just started playing the basic groove.... The backbeat is on 3, so it's a half-time feel, and it's 16th notes on the hi-hat. Lenny started playing a conga pattern. We played for five minutes on tape, no click, no nothing. We just played. And I was singing the bass line for "Africa" in my mind, so we had a relative tempo. Lenny and I went into the booth and listened back to the five minutes of that same boring pattern. We picked out the best two bars that we thought were grooving, and we marked those two bars on tape. We made another mark four bars before those two bars. Lenny and I went back out; I had a cowbell, Lenny had a shaker. They gave us two new tracks, and they gave us the cue when they saw the first mark go by. Lenny and I started playing to get into the groove, so by the time the that fifth bar came --which was the first bar of the two bars we marked as the cool bars we liked-- we were locked, and we overdubbed shaker and cowbell.

So there was bass drum, snare drum, hi-hat, two congas, a cowbell, and a shaker. We went back in, cut the tape, and made a one-bar tape loop that went 'round and 'round and 'round. The Linn machine was available to us. Maybe it would have taken two minutes to program that in the Linn, and it took about half an hour to do this. But a Linn machine doesn't feel like that! So we had an analog groove. We took that tape, transferred it onto another 24-track for six minutes, and David Paich and I went out in the studio. The song started, and I was sitting there with a complete drumset, and Paich was playing. When he got to the fill before the chorus, I started playing the chorus, and when the verse or the intro came back, I stopped playing. Then we had piano and drums on tape. You have to realize that there are some odd bars in "Africa", so when you have a one-bar loop going, all of a sudden, sometimes Lenny's figure would turn around. So Lenny went in and played the song again, but this time he changed his pattern a little for the turn-arounds, for the fills, for the bridge, for the solo. We kept the original part and the new one. Then we had to do bongos, jingle sticks, and big shakers doing quarter notes, maybe stacking two tracks of sleigh bells, two tracks of big jingle sticks, and two tracks of tambourine all down to one track. I was trying to get the sounds I would hear Milt Holland or Emil Richards have, or the sounds I would hear in a "National Geographic" special, or the ones I heard at the New York World's Fair. -- "Modern Drummer" (November 1988)

Since "Africa" was released in 1982, it has been played on every, single tour.

s and have recorded s; Lufkin's version is released as the B-side of her 2001 single, "". and often perform "Africa" in their live shows, and the song has been a popular cover for groups. , a group from Africa, recorded a French-language hip hop version of the song titled Afrika.

covered this song for 's .

* A quote from the second verse was voted the sixth worst lyric ever, in a poll for the BBC. [ [http://www.bbc.co.uk/6music/events/lyrical/top10.shtml BBC - 6 Music - Events - Taxing Lyrical ] ]

The wild dogs cry out in the night,As they grow restless longing for some solitary company,I know that I must do what's right,Sure as Kilimanjaro rises like Olympus above the Serengeti.

*"" features the song on the Emotion 98.3 radio station.
*The "" episode "" features the song briefly. Also in "" at the cleaners, Stan is seen murmuring this song, changing the famous "I bless the rains down in Africa" line to "I crash the planes down in Africa."
*"" features the song on the "" solos edition
*The "Scrubs" episode "" featured this song at the beginning of the episode.
*It is the official song of the held at .
*A snippet of this song was repeatedly featured on the radio show "".
*A snippet of this song and the video was used in a commercial.
*In an "" comic strip, Ray Smuckles is seen [http://achewood.com/index.php?date=03182002 dancing] , presumably to the song.