MD 363 begins at a dead end in the community of Wenona at the southern end of Deal Island.[2] The state highway heads north, passing through a sharp curve before crossing Middle Creek.[1][2] MD 363 runs through another series of sharp curves through marshland before passing St. John's Methodist Episcopal Church.[2] Beyond the church, the state highway straightens out, passing by the old post office building and a boat ramp accessed from Ralph Abbott Road before a high-level bridge carries the state highway over Upper Thoroughfare, a strait between Laws Cove and Tangier Sound. On the north side of the bridge, MD 363 passes MD 363A, the north approach to the previous bridge to Deal Island, before passing through the community of Chance, the site of Rock Creek Methodist Episcopal Church. After passing Haines Point Road, which leads to a large public boat ramp, the state highway continues northeast across the two branches of Rock Creek and through more marshland before entering Dames Quarter.[1][2] MD 363 traverses Dames Quarter Creek and passes through Deal Island Wildlife Management Area.[2] 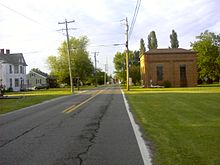 The old post office building along MD 363 on Deal Island.

After passing through the wildlife management area, MD 363 heads east on a 5-mile (8.0 km) straight through the very small hamlets of St. Stephens and Monie and bypassing the village of Oriole, which is accessed by Oriole Back Road from the west and MD 627 (Oriole Road) from the east.[1][2] After passing Venton Road, which leads to All Saints Church, the state highway traverses the Chesapeake Forest Lands. On the east edge of the forest, MD 363 curves northeast and then east toward Princess Anne, passing farmland, several residential subdivisions, and the Flying W Airport. Immediately after crossing the Manokin River, the state highway reaches its intersection with US 13 (Ocean Highway).[2] MD 363 continues east into the town of Princess Anne as Manokin Avenue, where the state highway reaches its eastern terminus at Mansion Avenue, named for the Teackle Mansion one block to the south.[1][2] The roadway continues east toward MD 675 (Somerset Avenue) in downtown Princess Anne.[2] 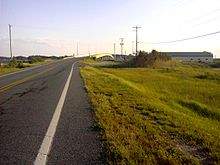 A distant view of the bridge over the Upper Thoroughfare from the mainland side.

The entire route is in Somerset County.